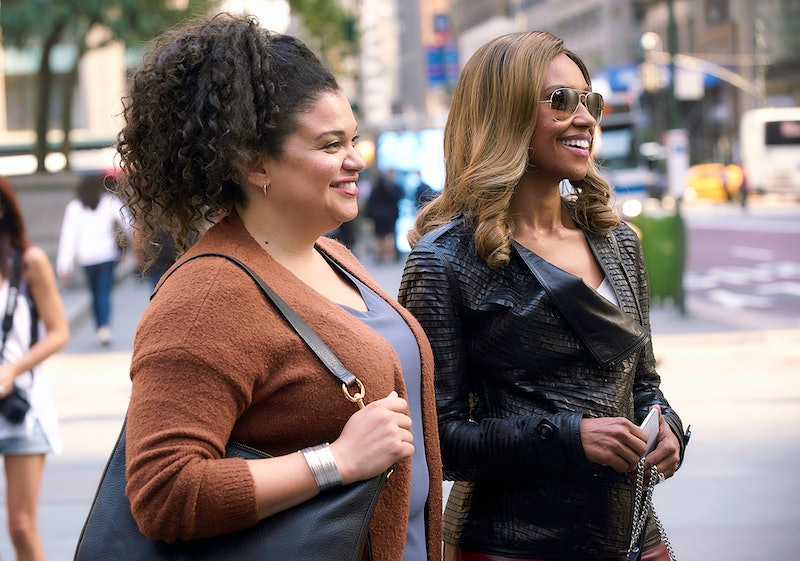 Pretty much every TV network — or group of TV networks, or tech company, or a thing you've literally never heard of — is adding a streaming service these days, and that includes BET. On September 19, BET+ will debut, and with it will come some new shows, like First Wives Club. The TV adaptation of the 1996 movie (which itself was adapted from a novel) will star Michelle Buteau, Ryan Michelle Bathe, and Jill Scott. If it already has you intrigued, you might want to know whether First Wives Club will return for Season 2, or if this is a miniseries situation.

Well, to start, First Wives Club is a regular series. And, because it's only just premiering, there is no announcement about a second season yet. Generally, a show returns for another season if it has good ratings, but because First Wives Club will be on a streaming service, there are other factors. BET+ is a brand new platform, for one, so the success of the service overall will need to be taken into account along with the success of the show.

There's also the fact that the run of shows on streaming services tends to be shorter than those on traditional TV. Business Insider reported in April that according to a report from Ampere Analysis, "Original streaming shows have an average lifespan of two seasons, compared to four seasons on cable and six-and-a-half seasons on broadcast networks."

Deadline has reported specifically on Netflix's trends in releasing original series, with sources saying that after three seasons, a show that isn't a huge hit (ex. Stranger Things) is unlikely to return because it won't get new customers — who are looking for the next big thing — to sign up for the service. So, platforms like Netflix have to keep the excitement up for new shows.

It would make sense that this would also be the case for BET+. If First Wives Club isn't a big hit, it might not be worth keeping it around too long. Instead, it could be replaced with a new show that will get people intrigued — and signing up — all over again.

Right now, though, the show has a lot of potential. It has a solid cast with its three stars, and the creator and writer is Tracy Oliver, who wrote the movie version of The Sun Is Also a Star and co-wrote Girls Trip. Also, people are familiar with the story already, and those who watched the film might want to see what a new version is like.

In the new adaptation, Buteau, Bathe, and Scott play three college friends — a doctor, a lawyer-turned-political-wife, and a singer, respectively — who reunite after Scott's character is involved in a cheating scandal. They all have issues in their marriages, and so, like in the film, they start plotting revenge.

Can those revenge schemes carry on for multiple seasons? Will the show stop being about getting back at exes eventually? That remains to be seen.

More like this
This First Look At 'The Gold' Shows Jack Lowden In A Whole New Light
By El Hunt and Sam Ramsden
Netflix Shut Down 'Bridgerton' S3 Rumours About A “Very Dark” Storyline
By Bustle
At 28, Debra Jo Rupp Was Living A Much Different '70s Show
By Grace Wehniainen
Shonda Rhimes Responded To The Surprise Exit Of A Day 1 'Grey's Anatomy' Figure
By Grace Wehniainen
Get Even More From Bustle — Sign Up For The Newsletter
From hair trends to relationship advice, our daily newsletter has everything you need to sound like a person who’s on TikTok, even if you aren’t.