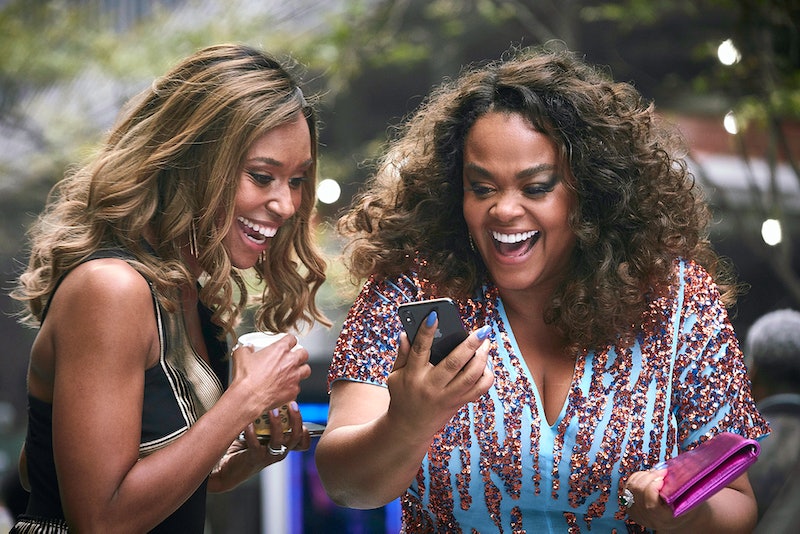 Classic rom-coms like Four Weddings and a Funeral and What Women Want have already been adapted this year, and where there's smoke, there's fire. Enter The First Wives Club — a 1996 comedy starring Goldie Hawn, Bette Midler, and Diane Keaton as jilted ex-wives trying to get back at their former husbands. And since the film is being adapted into a series for BET+, here's how The First Wives Club TV show cast stacks up to the original.

Girls Trip co-writer Tracy Oliver serves as the series executive producer, which should excite fans of the 2017 raunch comedy. "This version is similar [from the original First Wives Club] in the sense that it's three women discovering themselves and their power and their beauty and why they matter," Oliver said in a teaser for the show. And fans can rest assured that the iconic "You Don't Own Me" rendition from the original will make an appearance at some point during the BET+ remake.

But, at the end of the day, The First Wives Club is about the core group of women and their relationships with one another. Here's who rounds out this cast.

Fans learn from The First Wives teaser that Ari's husband is a politician and that she left her job as a lawyer to run his campaign. "When we first meet Ari, she's definitely the one that has been really puling for them to all stay friends no matter what," Bathe says in the above clip. "There's a lot going on, brewing underneath the surface in her world, as well. She's going to jump in and save her friends, and then we start see a little bit of her own unraveling start to happen, too."

Bathe, on the other hand, is known for her roles in This Is Us (starring her real-life husband, Sterling K. Brown), Empire, Boston Legal, and the BET sitcom Girlfriends, among others.

Bree is a doctor and mother who's separated from her husband, Gary. "I know a lot of Brees in my life," Buteau said in the above teaser. "A strong, badass, loyal, fierce woman, who will fight for her family and take care of her kids and be there for her friends." However, it's clear that she's juggling a lot of things, so time will tell whether Bree is able to handle all of that pressure.

As for Buteau, audiences have likely seen her before. Although she previously appeared in Russian Doll, Isn't It Romantic, and High Maintenance, the comedian's breakout role was arguably in the Netflix romcom, Someone Great. Although it was just a cameo, Buteau played a character named Cynthia, who had an emotional conversation with Gina Rodriguez's character on the subway platform. Since then, she's been in Always Be My Maybe, Tales of the City, and now The First Wives Club.

Hazel is an R&B singer, who is married to the president of her record label when the show begins. "She's in the midst of a bad relationship; she's in a career crisis," Scott said of her character in the same teaser. "I love that [Hazel is] powerful. I love that she doesn't know it just yet." Hopefully Hazel's able to get some closure during the run of the show.

Similarly, Jill Scott is a prolific singer and has been making music since 2000, when her debut album, Who Is Jill Scott? Words and Sounds Vol. 1, was released. However, she's also done her share of acting, and her credits include the starring role in The No. 1 Ladies' Detective Agency, Why Did I Get Married?, Girlfriends, and Black Lightning, among others.

Tallman's character, David, is Ari's husband and a charismatic politician running for office. His previous roles include The Last O.G., Dietland, the raunch comedy Rough Night, and Single Ladies.

Lee is known for playing Tyreke Scott in the '90s sitcom Sister, Sister, as well as for his roles in The Shield, Girlfriends, and Madea Goes to Jail, but in The First Wives Club, he plays Bree's estranged husband, Gary, whom he cheated on.

Truvillion's credits include D-major on Empire, Kurt in the 2005 Will Smith comedy Hitch, Vincent Jones in One Life to Live, and Gutta in the 2009 police thriller, Brooklyn's Finest. And while it's unclear what kind of person Truvillion's First Wives character, Khalil, will prove to be, he seems fiercely loyal to Hazel, if the above Instagram is any indication.

So now that audiences know who's playing what, all that's left to do now is listen to Lesley Gore on repeat until the next First Wives Club episode airs.

More like this
At 28, Debra Jo Rupp Was Living A Much Different '70s Show
By Grace Wehniainen
Rupert Grint Just Shared A *Major* Update About Ron Weasley’s Future
By El Hunt
Ashton Kutcher Wants Danny Masterson “To Be Found Innocent” In Rape Retrial
By Jake Viswanath
This 'Gossip Girl' Wardrobe Error Has Gone Viral On TikTok
By Alyssa Lapid
Get Even More From Bustle — Sign Up For The Newsletter
From hair trends to relationship advice, our daily newsletter has everything you need to sound like a person who’s on TikTok, even if you aren’t.