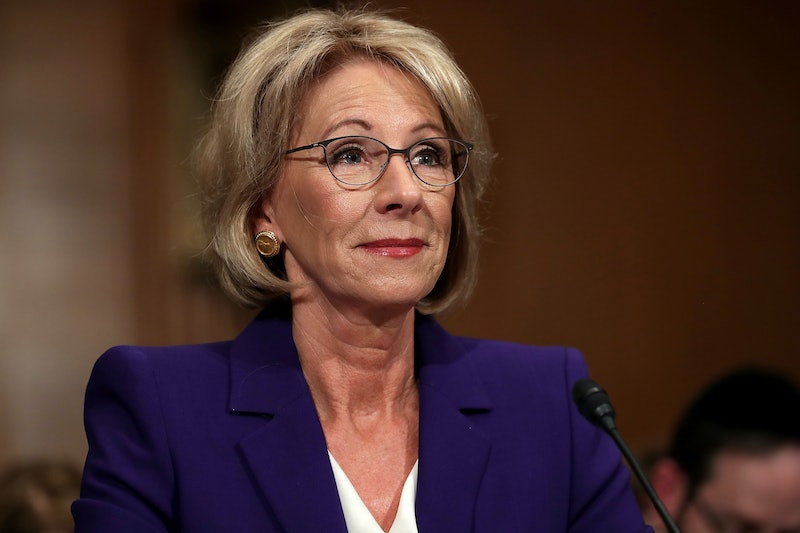 On Tuesday, the Senate is expected vote on the confirmation of Betsy DeVos, President Trump's nominee to head the Department of Education. Normally, this is an uncontroversial and low-profile cabinet post, but alas, we aren't living in normal times. The businesswoman and campaign contributor has drawn an unusual amount of criticism during her short time on the public stage, and DeVos' confirmation vote could be historic — but not for any reason that would make Trump or DeVos very happy.

Every Senate Democrat (and the independents who caucus with them) is planning on voting against DeVos, and so are two Republicans: Lisa Murkowski and Susan Collins of Alaska and Maine, respectively. This leaves the Senate deadlocked 50-50 on her nomination, and when the Senate ties, the vice president comes in to break it. So, if Democrats can't peel off another Republican senator, Mike Pence will have to close this deal for Republicans.

And if he does, he'll be setting two records that no presidential administration should be happy about setting. Never before has a cabinet appointee required the vice president's vote in order to be confirmed, which means that if DeVos is confirmed, she'll have less support in the Senate than any other cabinet member in U.S. history. That's not good.

That's not good all. If Pence has to vote to confirm DeVos, he'll be doing so just over two weeks into his first term as vice-president. That would be a new historical record, because the Senate has never required the vice president to break a tie so soon into a new administration. Usually, this doesn't happen until at least a few years into a president's first term, and sometimes — as in the Obama administration — it never happens.

Although this sounds like the kind of stuff that only historians care about, it actually says quite a bit about the Trump administration. When the vice president has to break a tie in the Senate, it's an indication that whatever the Senate is voting on has just barely cleared the minimum level of acceptability. In this case, it means that DeVos is anomalously unpopular, as far as cabinet members go.

It does look as if, despite an all-night protest by Senate Democrats, DeVos will ultimately be confirmed by the smallest of possible margins. And this may say more about the state of Trump's administration than anything else. While presidents face plenty of uphill climbs during their time in office, getting their education secretary confirmed isn't supposed to be one of them. That's supposed to be one of the things a president does early, easily, and without controversy. If Trump was just barely able to get his education secretary confirmed, imagine what it will be like once he tries to pass some legislation.