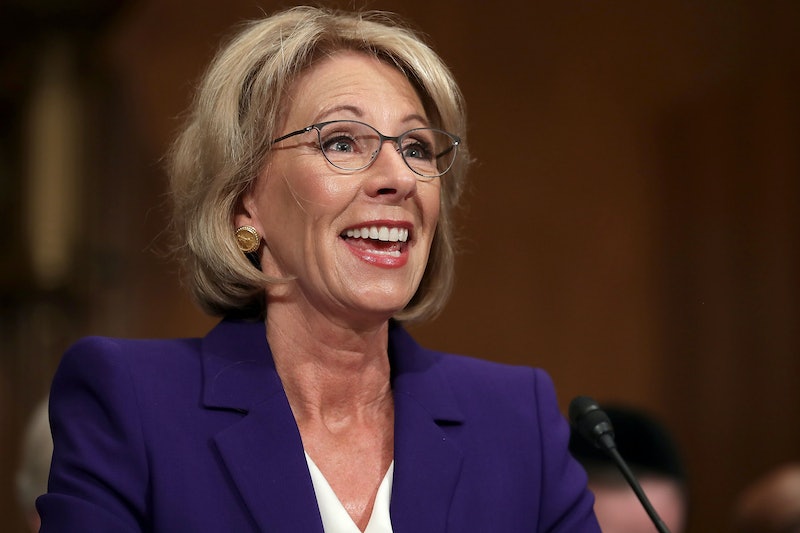 On Tuesday, February 7, the U.S. Senate finally voted on President Donald Trump's nominee to lead the Department of Education, Betsy DeVos. It wasa tense stretch in which the outcome hung in the balance, thanks to defections by GOP senators Susan Collins and Lisa Murkowski. Because of those naysayers, every other Republican had to vote yes for her nomination to clear. And now it's official: Betsy DeVos is Trump's Secretary of Education.

In the end, despite Murkowski and Collins breaking from the party, the Democrats were unable to thwart her appointment. But it wasn't without a fight, which included their holding of the Senate floor for a full 24 hours to delay DeVos' confirmation. Minnesota senator Al Franken, for his part, called DeVos' committee hearing performance the "most embarrassing" one he'd ever seen.

Ultimately, DeVos slid through with the bare minimum level of support she needed: 50 votes, with the tie-breaking vote going to Vice President Mike Pence. And that was an utterly unprecedented situation ― no presidential cabinet nominee before DeVos had ever required a vice president's tiebreaking vote, sharply underlining the massive controversy surrounding her selection. In the days leading up to the vote, Senate phone lines had reportedly been jammed to the extreme, with constituents across the country, even in some red states, demanding that their senators vote her down. And yet, all that is over now, and DeVos sits atop America's public education system.

As previously mentioned, the entire Senate GOP except for Murkowski of Alaska and Collins of Maine ultimately backed DeVos, and at least a couple of those senators could face tough races in 2018 in which they'll have to account for their decisions. Namely, ones like Nevada senator Dean Heller, and Arizona senator Jeff Flake, both of whom were on the target list for the Democrats. Pennsylvania senator Pat Toomey also voted yes on DeVos, and blamed the high number of phone calls urging him not to on "people outside of our state."

DeVos also drew a crucial vote from Alabama senator Jeff Sessions, who's overwhelmingly likely to leave the Senate in short order to become attorney general. That became part of the calculus for the Republican effort to push DeVos through; thanks to her having had no margin for error, Sessions had to remain in the Senate until after she was confirmed. And now that the job is done, it'll soon be Sessions' turn for a vote. While he's widely expected to clear the necessary threshold, it's no stretch to say that he's one of the most radical and controversial of Trump's picks.