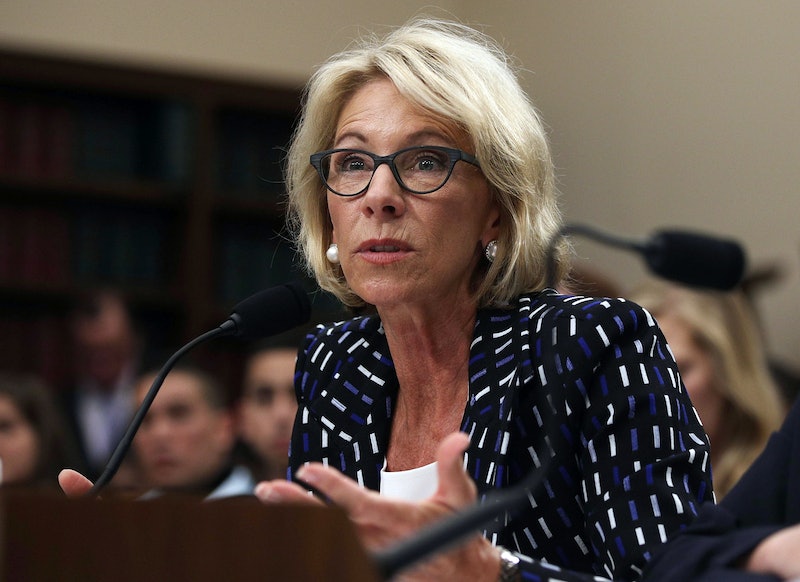 Education Secretary Betsy DeVos was accused of siding with men's rights activists and alleged rapists when she tossed out the Obama administration's guidelines on how colleges should address reports of sexual assault in September. Five months later, the full effects of her decision are still unknown — but VICE reports that at least 25 major universities are ignoring DeVos' campus sexual assault guidelines altogether. Despite that news, advocates for sexual assault survivors say the administration is setting a dangerous precedent.

"Title IX hasn’t changed as a law," Catalina Velasquez, communications director for End Rape on Campus, tells Bustle. "It’s just we have an agency that has been hostile toward the needs of survivors and contributing to the problem by disincentivizing universities... from protecting survivors from their rapists."

The "Dear Colleague" letter DeVos rolled back had required colleges to use a "preponderance of evidence" standard when evaluating sexual assault cases. That's the same level of evidence required in civil trials. DeVos' new temporary guidelines, however, recommend that universities use a higher standard of "clear and convincing evidence."

That standard still doesn't require proof beyond a reasonable doubt, as is necessary in criminal cases, but it does constitute a higher standard of evidence than the Obama-era guidelines. Other changes to the guidelines include eliminating the requirement that schools address sexual assault reports within 60 days, and allowing mediation sessions between the accuser and the accused, which wasn't allowed under the Obama guidelines. The universities ignoring DeVos' new guidelines have chosen to stick with the Obama-era recommendations.

Those universities that publicly proclaimed they would maintain the previous sexual assault guidelines include schools that have dealt with high-profile cases in recent years, including Stanford and the University of Wisconsin-Madison. While schools that haven’t announced their stance could be quietly following suit, they could also be acting on the new recommendations from the Trump administration, which worries those fighting to protect survivors.

It’s important to note that the Title IX law prohibiting discrimination on the basis of sex hasn’t changed, only the federal government’s guidance on how universities should enforce the law. But Velasquez believes DeVos’ guidance fails survivors.

“Under this current administration, what we’re seeing is a disregard for the needs of survivors and a false narrative that things have been skewed in favor of survivors… which is not only false but also not taking into account how difficult and how many other barriers beyond upholding a preponderance standard [survivors face]," she tells Bustle.

Three civil rights groups sued the Education Department last month for rolling back the Obama-era guidelines, asserting that the change created a "chilling effect" and confusion on college campuses. SurvJustice, a nonprofit that provides legal assistance to survivors, also said it's seen a "decrease in the number of sexual violence survivors seeking its services" since DeVos announced her decision. The National Women's Law Center, which is providing council on the case, wrote in a statement:

"In the midst of a national conversation highlighted by the #MeToo movement about the devastating impact of sexual harassment and assault, this lawsuit seeks to reinstate survivor protections revoked by Secretary Betsy DeVos, such as the requirement that schools conduct prompt investigations following reports of sexual misconduct. The suit also seeks to remove new, discriminatory barriers the Trump Administration has put in place that disadvantage survivors of sexual violence."

DeVos previously said the of the Obama-era guidance: "Some suggest that this current system, while imperfect, at least protects survivors and thus must remain untouched. But the reality is it doesn’t even do that." However, her meetings with men's rights activists — as well as her decisions to require a higher level of evidence and give schools more time to respond to reports of assault — struck anti-sexual assault advocates as moving the issue in the wrong direction.