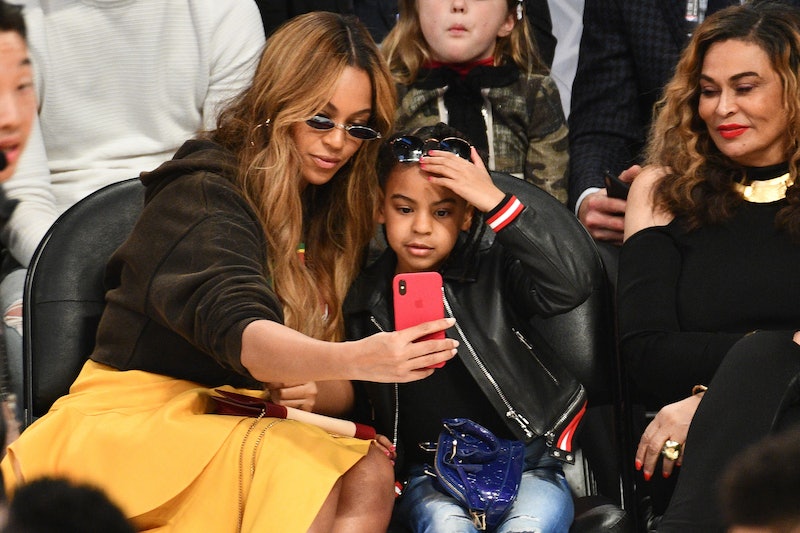 Sometimes moms and their little girls like to dress up in the same outfits, sporting the same pair of Converse, rocking similarly flared overalls and cat eye sunglasses, or dressing up in the same twirly party dresses. But if you're music royalty, that mommy-and-me moment reaches new, couture-like heights. Beyoncé and Blue Ivy wore matching gold gowns to the Wearable Art Gala, and it is a goal to copy — even though these are the kinds of frocks us normals could never really afford without selling a kidney onto the black market first.

On March 17, people showed up to LA's Alexandria Ballroom for the second annual Wearable Art Gala, which was hosted by the co-founder, Tina Knowles (AKA Beyoncé's mom.) The benefit was to help fund the WACO Theatre Center, which not only helps bring art and theater to disenfranchised communities, but is also a place of mentorship for budding artists, which helps them create a game plan on how to turn their art into a profitable living.

The theme and dress code of the gala was "From WACO to Wakanda," which highlighted the huge impact Black Panther's release has had on both culture and fashion. Guests were to come with their own black tie interpretations of Wakanda, and Beyoncé and Blue Ivy came onto the red carpet like royalty.

Beyoncé, who received the 2018 WACO Theatre Humanitarian Award, wore a masterpiece of a gold gown that was custom made by fashion label Falguni Shane Peacock. Featuring gold cut-outs over a sheer overlay, and a dramatic, geometric train, the dress was a complete showstopper. But if you're wondering how it fit into the Wakanda theme, designers Falguni and Shane Peacock had a very specific vision when creating it. Specifically, they took inspiration from the Nubian warrior queen, Amanishakheto. She fiercely fought off the Roman army led by Augustus while she reigned, driving them back for three years until Augustus admitted defeat and proposed a treaty.

"The metallic cutouts are placed strategically to mimic the shape of armor, as worn by the Nubian armies,” the designers shared with WWD. “The elaborate gold train was added to create a 3-D effect that emphasized royalty. Between the metallic cutouts to the gold dramatic train, we attained an artistic statement while respecting the Nubian inspiration.”

This isn't the first time that Beyoncé worked with the design house either, where she also teamed up with the label to create the black dress in her "Formation" video.

Blue Ivy also had her dress made by the designers, and while they didn't share who or what was the inspiration behind the puffy fringe dress, she definitely gave off her own warrior queen vibes. Sporting a gold wig that carried a serious general-helmet aesthetic, and a metallic bronze dress that perfectly complimented her mom's look, she paid tribute to Wakanda perfectly.

While the pair looked amazing dripping in gold together, they also had another mommy-and-me moment behind the scenes, where they swapped clothes, so to speak.

While Blue Ivy capped off her gala gown with a helmet, she was originally supposed to wear a gold headband — specifically, the one that Beyoncé ended up wearing to the red carpet.

The solid gold piece was created by the brand Uniquely Wired M, and the designer behind the accessory, M'Shari Whaley, shared some insight on the quick swap. Posting a photo of the handcrafted piece on her Instagram, she wrote underneath the caption, "We Designed this for Blue Ivy, but So grateful Bey loved it and Rocked it."

The two are now at the stage where they could swap clothes and steal from each other's closets, which is too adorable for words. While the pair looked like regal queens during the gala, it's exciting to imagine what other twinning looks they'll sport in the near future.