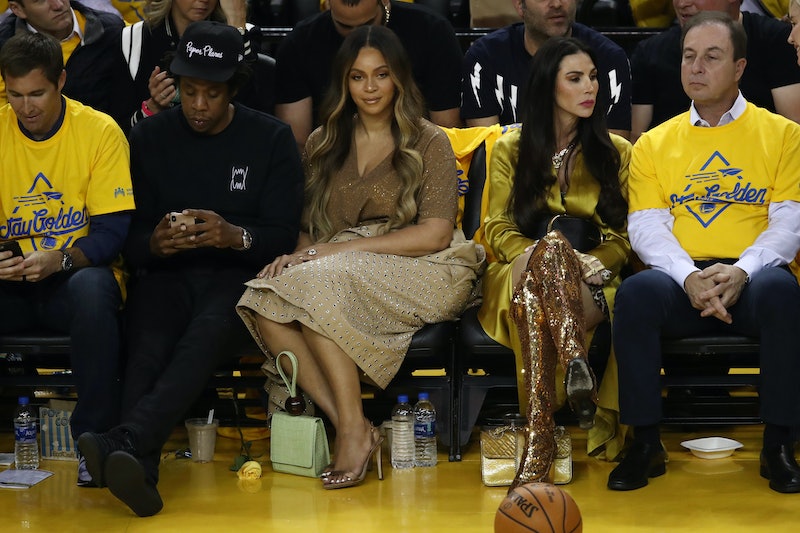 Queen Bey is making headlines after attending Game 3 of the NBA Finals on Wednesday with Jay-Z. During the game between the Golden State Warriors and the Toronto Raptors, Beyoncé fans criticized the Warriors owner's wife, Nicole Curran, for leaning over the singer to talk to Jay-Z. The Shade Room reported on Thursday that Curran responded to all the Beyoncé drama on Instagram by explaining the situation and clarifying it's been taken out of context. (Curran's account has since been made private.)

Before getting into Curran's response, let's explain exactly what happened. It all started with a tweet from ESPN. The sports outlet shared a video of the rapper, Beyoncé, and Curran sitting courtside at the game. As you can watch for yourself below, Curran leaned over Beyoncé a couple times to say something to Jay-Z. The video shows the two talking, and even the celebrity couple smiling and waving. Not long after, it looks like Bey's smile fades or that's what fans are assuming.

Many people believe, solely based on Beyoncé's facial expression, that she was irritated with Curran for not only leaning over her, but also for chatting it up with her husband. There are some individuals even claiming Beyoncé tried to put space between herself and Curran by sliding her chair over and giving Curran a tiny bump.

For example, one person tweeted, "beyonce is so annoyed by this woman and hov gon’ hear about it on the jet." Another person wrote, "the takeaway of this clip is not 'there are two billionaires here,' it's the way Beyoncé masterfully shoved that becky on the right aside without saying a word or lifting a finger." Yes, some people are even calling Curran "Becky," which stems from Beyoncé's lyric, "Becky with the good hair," from "Sorry" on Lemonade. Many have assumed "Becky" was Beyoncé's way of referring to Jay-Z's infidelity. (Jay-Z later admitted to cheating on Beyoncé in a 2017 interview.)

Fans also reacted strongly to the NBA moment by flooding Curran's Instagram, specifically a photo she posted of herself and Beyoncé on June 5. Fans repeatedly commented with a bunch of bee emojis, which symbolize the Beyhive. This also led to Curran reportedly turning off her comments. According to E! News, Curran appeared to be fixing Beyoncé's hair in the photo that she also captioned, "We should all help and support each other." As mentioned above, Curran's Instagram has since been set to private.

There were even others who couldn't help but point out that Beyoncé supposedly cropped out Curran in a photo and video she shared from the game on her Instagram. As on person tweeted, "#Beyoncé cropped Becky out of her post. [skull emoji]."

After all of this, Curran felt the need to say something, and understandably so. According to a screenshot of her Instagram response taken by The Shade Room, Curran wrote,

"Listen Beehive. I respect Queen B. I love her! I talked to her husband twice tonight. First, to take a drink order for them both when they arrived as they were our guests. Second, to explain why I gave his wife a rose from a fan. All of this has been taken out of context. I am a happily married woman. Telling me to kill myself?????? Somehow I don't think she would support this."

The video of Beyoncé is not only unnecessarily blowing up the internet, but many are overdoing it with their assumptions. First of all, no one has any idea what Bey was feeling or thinking in that particular moment, except for the singer herself. You can't just assume she was angry. Secondly, it's unfair to not only call Curran "Becky," but to also accuse her of flirting with Jay-Z and mistreating Beyoncé.

Does it look like Beyoncé is annoyed? Yes, but again, her facial expression might be misinterpreted. Until she comments on the situation herself, people won't know what was going through Bey's mind at that time. It's best not to assume she was shading Curran. Fans have definitely taken their reactions too far. Between the constant bee emojis and apparently telling her to kill herself, Curran doesn't deserve that.