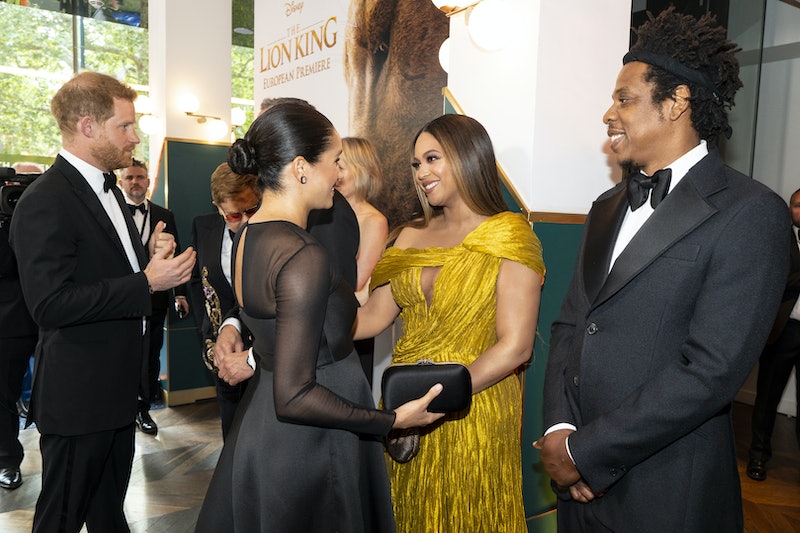 On Sunday night (July 14), Prince Harry and Meghan Markle attended the European premiere of Disney’s The Lion King, which also happened to be Meghan’s first premiere as a royal. And what better way to mark that occasion than to finally meet Beyoncé and Jay-Z, who are arguably the world’s biggest stans of the royal couple. After embracing and congratulating them on the birth of their son, Beyoncé and Jay-Z gave Meghan and Harry parenting advice, which was as inspirational as you already thought.

As the Daily Mail reports, after speaking about their children, Jay-Z told Harry that to get the most out of parenting you’ve got to maintain a balance between self-care and bonding with your child. “The best advice I can give you, always find some time for yourself,” the artist said.

It seems that the Duke and Duchess already have this covered, as while Meghan is still reportedly on maternity leave the couple have been attending events here and there sans Archie, from Trooping the Colour in early June, Meghan’s appearance alongside Kate and Pippa Middleton at Wimbledon, and The Lion King premiere. Meghan was also seen with Archie and Kate’s children cheering on Harry and William during their polo match last Wednesday (July 10).

Anyway, back to Beyoncé and Jay-Z. This meeting is iconic on numerous levels, but it’s also a long-time coming for the Carters. If you cast your mind back to February, you’ll remember that Meghan featured prominently in their acceptance speech for Best International Group at The BRIT Awards 2019.

Beyoncé also honoured Meghan during Black History Month on her blog as part of the #WeGood campaign. “Meghan’s background as a film and tv actress has allowed her to use her platform for good,” the post read. “She became the Duchess of Sussex following her marriage to Prince Harry of the British royal family in May 2018, becoming one of the few Black women to join a royal family.”

“At the wedding her culture was front and center, and she and Prince Harry have continued to push the race relations dialogue forward both near and far. In honor of Black History Month, we bow down to one of our Melanated Monas. Congrats on your pregnancy! We wish you so much joy.”

The premiere itself was also of great importance, “as it was in support of the conservation and communities work of Prince Harry and the Royal Foundation,” as Elle writes. Alongside the release of the film, Disney announced their ‘Protect the Pride’ campaign which aims “to raise awareness and protect the endangered and dwindling lion population in Africa,” supported by the Royal Foundation.

“Through the work of His Royal Highness, The Royal Foundation is committed to advancing community conservation efforts across Africa and around the world, working with communities to ensure a sustainable future for the planet,” a Buckingham Palace spokesperson said in a statement as The Telegraph reports.

“The Duke of Sussex has taken a deep personal interest in frontline conservation projects that work to protect Africa’s natural heritage and support both wildlife and local communities.”