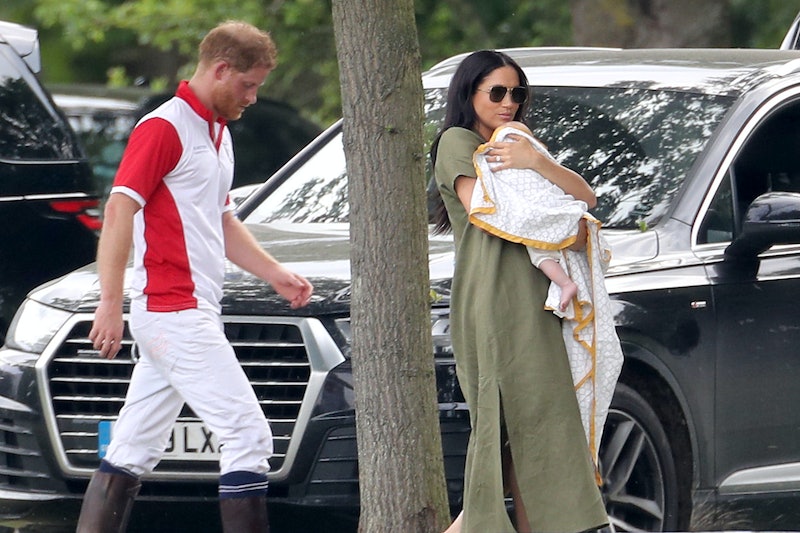 During one of his most recent charity polo matches, Prince Harry had two major fans cheering him on. As Town & Country noted, Meghan Markle took Archie to a polo match to root on the Duke of Sussex and his brother, Prince William. Their outing was all the more exciting considering that it marked the royal baby's very first public appearance.

On July 10, the Duchess of Sussex, with Archie Mountbatten-Windsor in tow, attended the polo match at the Billingbear Polo Club. Based on photos from the event, the duchess kept her little one close, as she could be seen cradling him during the game. People also reported that Markle placed a kiss on baby Archie's forehead as they made their way to the field. The duchess and her son weren't the only ones who cheered on the princes. Kate Middleton, along with her children — Prince George, Princess Charlotte, and Prince Louis — also had some fun during the polo match. Basically, it was a total, royal family affair.

According to the official Kensington Palace Twitter account, Harry and William both took part in King Power Royal Charity Polo Day for the Khun Vichai Srivaddhanaprabha Memorial Polo Trophy, which was set to help raise money for the charities that they support.

While their polo match outing marked baby Archie's first public appearance, it isn't the first time that royal watchers have gotten a glimpse of the Duke and Duchess of Sussex's little one.

Most recently, on July 6, Markle and Harry announced via their official Sussex Instagram account that Archie had been christened in an "intimate service" officiated by the Archbishop of Canterbury, Justin Welby. The service took place at Windsor Castle, which just so happens to be incredibly close to the Sussex family's Frogmore Cottage home and is where the couple wed back in May 2018.

As they highlighted on Instagram, Archie's christening gown is a replica of the one Queen Victoria commissioned in 1841 and is one that cousins George, Charlotte, and Louis also wore for their christenings. The caption continued to detail,

"The Duke and Duchess of Sussex are so happy to share the joy of this day with members of the public who have been incredibly supportive since the birth of their son. They thank you for your kindness in welcoming their first born and celebrating this special moment. Their Royal Highnesses feel fortunate to have enjoyed this day with family and the godparents of Archie."

Prior to his christening, and as royal watchers will likely recall, the duke and duchess gave the world its first look at the newborn back in May, only a couple of days after his birth.

According to People, Markle and Harry have truly taken to parenthood, which, considering all of their sweet moments as a family, shouldn't come as a surprise to anyone. "They are basking in the glow and enjoying each day," a royal source told the publication, "As most new parents are, they’re just so excited. There’s something new every day. They’re just really happy."

Considering that Markle and Archie's polo excursion was only the royal baby's first public appearance, there will, undoubtedly, be so many more outings to come featuring the adorable family-of-three.