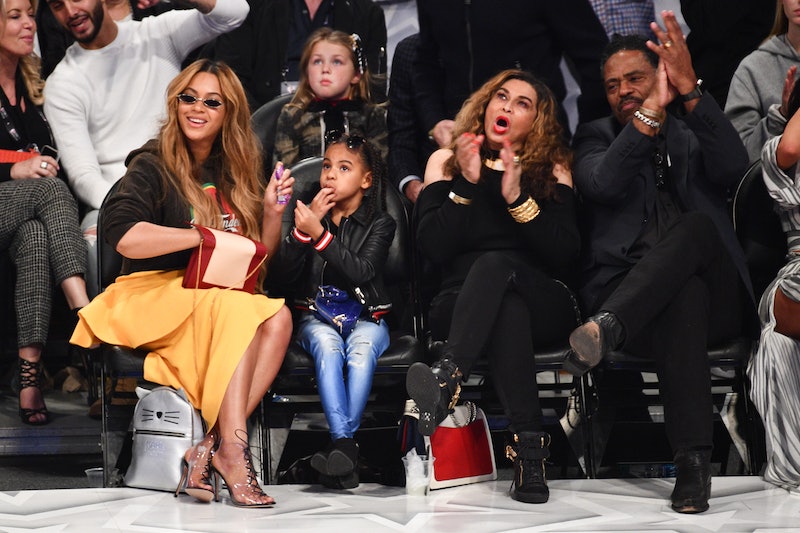 On Thursday evening, Queen Bey shared a throwback photo that was more profound than the average #TBT. Beyoncé made a Blue Ivy comparison on Instagram that showed just how similar her daughter looks to how Beyoncé looked at that age. And the pictures were almost uncanny. Even though it makes perfect sense for a child to look like their parents, it's always a little bit shocking to see just how alike two humans can be, multiple decades apart.

For the photo, Beyoncé wrote, "Someone made this comparison of me at age 7 and Blue at age 7. My baby is growing up. 🥰" Given that Beyoncé's account often seems so perfectly curated, this photo feels especially intimate, particularly because of that caption.

Prior to posting that photo, Beyoncé was on her normal Instagram business, posting a photo earlier that day of herself looking fierce in a striped two-piece outfit. But even that photo contained a surprising Easter egg: in the third photo of the carousel, Blue Ivy appeared to be lying on some wild-looking ball in her own two-piece outfit. Like mother, like daughter.

The caption, once again, was an ode to her daughter. Beyoncé wrote, "Photo Credit: B.IV😍 "

It appears that Beyoncé's Instagram activity was so inspiring that some other celebrities had to join in on the fun: Busy Phillips posted an Instagram side-by-side of herself with the photo of Beyoncé in the striped outfit, with both of them standing in front of the same technicolor background.

As W Magazine notes, Beyoncé's social media savvy wasn't always this, well, savvy. Her Instagram handle used to be "baddiebey," the publication reports, and she was one of the first A-listers to use a Tumblr to talk directly to her fans. However, that relatively casual relationship to social media changed in the mid-2000's, when Beyoncé hired a visual director to literally curate her life on a daily basis.

Per GQ, Beyoncé's visual director has been photographing her daily life for up to sixteen hours a day since 2005, at least up until 2013 when the article was released. What's more, the publication noted that Beyoncé puts all of these photos, as well as thousands of hours of private video footage (some of which has been released in her HBO documentary, Life Is But a Dream), as well as a recording of all of her interviews since 2005, in a private storage center for preservation and future use.

In recent years, it appears that Beyoncé has become a little bit more comfortable sharing photos of Blue Ivy; her twins, Rumi and Sir, are another story entirely, and are rarely seen or photographed. In December, Beyoncé skipped Instagram and went straight to her website to showcase a few rare photos of her twins during a family trip to India, following a private performance Bey did for a wedding.

Though Blue Ivy doesn't have any of her own social media accounts quite yet, it's safe to say she'll be a total natural when the time comes, and might just be a young influencer. It runs in the family.