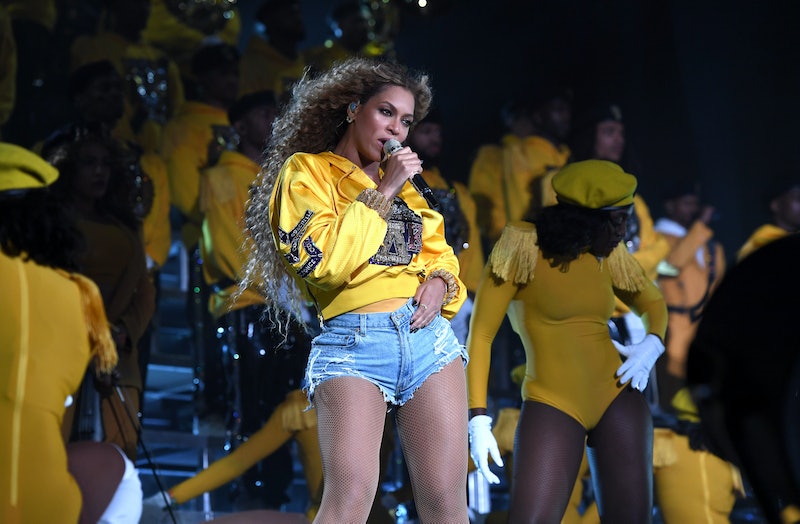 After several vague teasers from the streaming service, the Netflix trailer for Beyoncé's Homecoming documentary is here. Homecoming: A Film By Beyoncé will hit Netflix on April 17, and it will give fans an inside look at her instantly iconic 2018 Coachella performance. A tweet from Netflix's official Twitter account described the film as "an in-depth look at Beyoncé's celebrated 2018 Coachella performance form creative concept to cultural movement."

As Bustle previously reported, fans suspected Beyoncé would release a Netflix documentary about her Coachella performance, based on the imagery the streaming service teased about Homecoming over the weekend. The Netflix account @StrongBlackLead posted a photo of the word Homecoming in black Greek letters on Sunday, a simple but effective way to tease the news.

Beyoncé wore yellow at one point during the Coachella show, and she also wore a shirt bearing her own name in Greek letters. Plus, bees (and thus, the Beyhive of Beyoncé fans) are black and yellow, making the teaser very effective.

The Greek lettering isn't a coincidence, either. A press release from Netflix obtained by Bustle explained:

"Homecoming presents an intimate look at Beyoncé’s historic 2018 Coachella performance that paid homage to America's historically black colleges and universities. Interspersed with candid footage and interviews detailing the preparation and powerful intent behind her vision, Homecoming traces the emotional road from creative concept to cultural movement."

In addition to staging her Coachella performance as an HBCU homecoming event, Beyoncé has also offered HBCU scholarships to deserving students. The institutions are clearly important to her, and the new documentary will highlight their importance even more.

Other than the trailer and Netflix's brief statement, there aren't a ton of details about what Homecoming will entail. Fortunately, fans won't have to wait long to see the documentary. And based on the responses to the new trailer so far, it looks like plenty of people will watch the movie.

Some fans also praised Beyoncé for honoring historically Black colleges and universities in the performance and in the new documentary.

In addition to showcasing the legendary Coachella performance, it looks like Homecoming will feature a look at Beyoncé and Jay-Z's family life. The brief trailer includes scenes of the couple together, along with their three children: Blue Ivy, Rumi, and Sir. The clip also features a voiceover from Maya Angelou, adding even more meaning to Beyoncé's performance.

"What I really want to do is be a representative of my race, the human race. I have a chance to show how kind we can be, how intelligent and generous we can be. I have a chance to teach, and to love, and to laugh," Angelou says in the trailer. "I know that when I finish doing what I'm sent here to do, I will be called home, and I will go home without any fear, trepidations, wondering what's going to happen."

Beyoncé's Coachella performance resonated with plenty of fans, so it's not a surprise that Netflix would want to honor it with a feature documentary. Homecoming is sure to delight plenty of fans, especially those with connections to HBCUs.