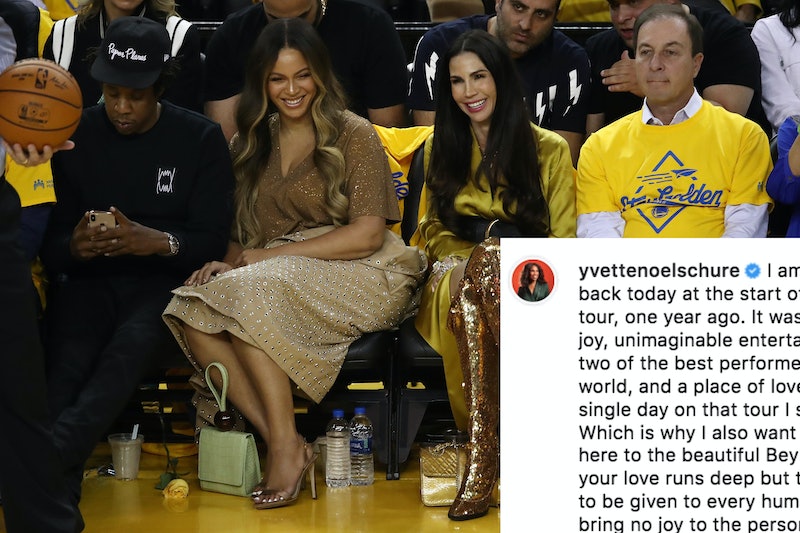 After some courtside side-eye went viral, Beyoncé fans had a bit of a field day on social media. The singer and her husband Jay-Z attended one of the NBA Finals games earlier this week, where they sat alongside Nicole Curran, the wife of the owner of the Golden State Warriors. A brief clip of their interaction, where it appeared Curran leaned over Beyoncé to speak to Jay-Z, blew up online. Bey's facial expression indicated she might've been a little uncomfortable — but from there, things took on a life of their own. Now, Beyoncé's publicist issued a statement asking fans to be kinder on the internet.

"I am looking back today at the start of The OTRII tour, one year ago. It was a place of joy, unimaginable entertainment from two of the best performers in the world, and a place of love. Every single day on that tour I saw love. Which is why I also want to speak here to the beautiful BeyHiVE. I know your love runs deep but that love has to be given to every human. It will bring no joy to the person you love so much if you spew hate in her name. We love you. 🐝 🐝 🐝"

While Noel-Schure didn't reference the NBA situation by name, it's pretty clear what she's talking about, especially since Curran wound up removing her entire Instagram page following all of the online hatred being thrown her way.

Prior to removing her account (and even making it private before that), Curran also turned off the comments section, but that wasn't before sharing her side of the story in a screenshot posted by The Shade Room. In response to the flood of bee emojis on her page and other messages, Curran wrote on Instagram:

"Listen Beehive. I respect Queen B. I love her! I talked to her husband twice tonight. First, to take a drink order for them both when they arrived as they were our guests. Second, to explain why I gave his wife a rose from a fan. All of this has been taken out of context. I am a happily married woman. Telling me to kill myself?????? Somehow I don't think she would support this."

That's not the only insight Curran has given about this situation, which clearly got taken out of context. According to ESPN's senior writer Ramona Shelburne, who spoke with Curran on Thursday, "She was in tears. Said she had been getting death threats on social media all night this morning she disabled her IG account just to make it stop."

Threatening someone's life, as well as encouraging them to harm themselves, is never OK. And as Noel-Schure's Instagram message heavily implied, it's not something Beyoncé would ever condone either, since she wrote, "It will bring no joy to the person you love so much if you spew hate in her name."

It's one thing to enjoy an artist's music and support them on the internet, and it's another to throw hate towards a stranger, just because of an easy-to-misinterpret video floating around. Hopefully Beyoncé's publicist's statement helps further put things in perspective and prevents similar incidents in the future.

More like this
Beyoncé’s Special Tribute To Sister Solange Was Both Touching & Hilarious
By Stephanie Topacio Long
Dixie D’Amelio & Noah Beck “Love Each Other” Despite Breakup Rumors
By Julia Emmanuele, Jordyn Tilchen and Grace Wehniainen
Here's What Happened After Rachel & Aven Left The 'After The Final Rose' Stage
By Grace Wehniainen
Tyra Banks Flubbed The Name Of Charli D’Amelio’s Boyfriend On 'DWTS' Bond Night
By Jake Viswanath
Get Even More From Bustle — Sign Up For The Newsletter