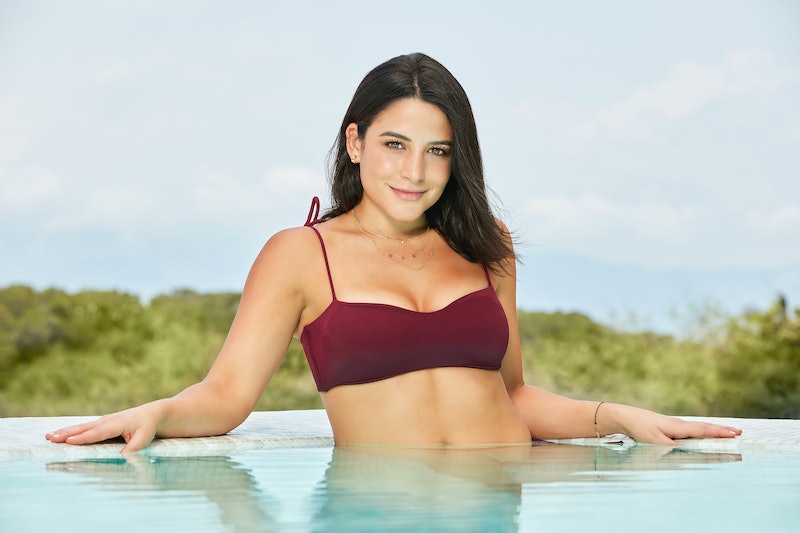 Bachelor fans everywhere were hoping for a Bibiana Julian and Peter Kraus romance, but that never seemed to pan out. However, there is some good news to celebrate when it comes to her love life: Bibiana is dating someone new. On Jan. 21, the Bachelor alum posted a photo of herself kissing a mystery guy on Instagram with the caption, "dream catcher."

She did not tag anyone in the photo. However, an article from People indicated that Bibiana was posing with a man that sure looks a lot like the guy in photos from a beach trip earlier in January. Bibiana also shared a photo with someone who appears to be the same person in December. Plus, the caption is similar and read, "dream state."

In those photos, Bibiana did tag an account, but it's private. The only indication into the person's identity is that there's a link in the profile's bio to Tejesta, a sunglasses brand. So, maybe he has something to do with this company? The brand's website does say that it's based in Miami, Florida — which is where Bibiana lives, so that would make sense. Nevertheless, her dating situation is still a bit of a mystery.

As of this moment, Bibiana has not commented on the romance beyond the photo she shared. However, she does have a lot of support from her fellow Bachelor alums. Kendall Long, Vanessa Grimaldi, Annaliese Puccini, Marikh Mathias, Lily McManus, Chris Randone, and Angela Amezcua were among the many Bachelor Nation members who shared their approval in response to Bibiana's social media post.

While she hasn't shared any details about this mystery man yet, Bibiana posted about joining the Match dating app in December 2018. Maybe she connected with her new guy through the app? Now that would be quite the endorsement.

Before posting about her Match membership, Bibiana was spotted with Peter at a Miami Heat game in December 2018. A super observant Bachelor fan noticed them sitting together in a clip of Hassan Whiteside walking off the court after he got ejected from a game.

A couple weeks later, Bibiana addressed the Peter rumors. In a conversation with Ashley Iaconetti and Ben Higgins for their The Almost Famous Podcast With Ben And Ashley I, Bibiana denied a relationship with Peter. She declared, "Nothing is going on with Peter Kraus and I. Absolutely nothing."

During that same interview, Bibiana revealed that she had someone special in her life. She told her fellow Bachelor alums, "I don't want to jinx it, but this guy is kind of too good to be true." She even said that this man is "everything I would want in a person."

And of course, she emphasized, "Nobody knows him and he's not Peter Kraus." Even though she didn't name names, Bibiana explained her mindset when it comes to dating. She told Ben and Ashley I., "I believe in projecting the kind of person that you want and acting a certain way just to kind of attract that person in your life."

She remarked, "I think I may have found that guy, but I think I want to tread lightly." Well, a month later, they are Instagram official, minus tagging him in PDA-laden photos and mentioning his name.