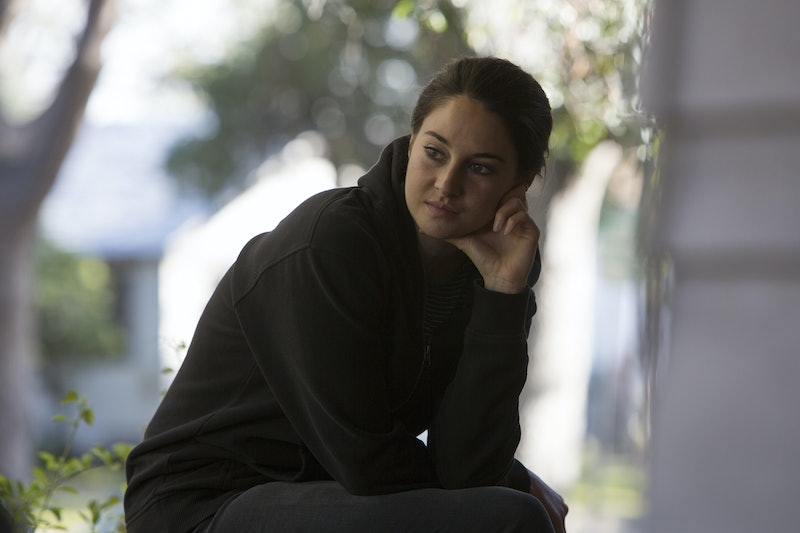 It's been clear from day one that Ziggy's dad is a bad guy, but in the March 5 episode "Living the Dream," it was confirmed that he's a rapist who attacked Jane on Big Little Lies. Proving that the power of women's relationships is this show's strength, Jane tells Madeline about the night of her assault. More than six years after that traumatic night, her conversation with Madeline marks the first time she's told anyone the truth about Ziggy's dad. She tells Madeline that she hasn't spoken to a therapist about it, and the depiction of Jane's untreated PTSD on Big Little Lies spotlights an important mental health issue that is often misunderstood and stigmatized.

Many people associate PTSD solely with veterans — and it's certainly a major problem in this population. In the years since the American Psychiatric Association added PTSD to the The Diagnostic and Statistical Manual of Mental Disorders in 1980, doctors have learned that the illness can be caused by a wide range of events, including sexual assault, domestic violence, natural disasters, and car accidents. Although women are slightly less likely than men to experience a traumatic event, they're twice as likely to develop PTSD — largely because traumas experienced by women are extremely intimate and personal.

"Sexual assault survivors experience higher rates of PTSD in comparison to survivors of many other forms of trauma, with over one-third developing PTSD at some point in their lives," clinical psychologist Dr. Heidi Zinzow tells Bustle. "This in part can be due to the the stigma, shame, and self-blame associated with sexual victimization. Especially in incidents that do not involve physical force (e.g., alcohol-involved, verbally-coerced, and incapacitated assaults) the victim may experience blame and have trouble acknowledging the incident as rape."

Jane met her attacker during a night of drinking and she tells Madeline that, although she initially resisted, she stopped fighting back because she feared he would kill her. Big Little Lies is fiction, but it will undoubtedly resonate with many women and men who have survived a sexual assault. Like so many other survivors, I've spent far too many hours wondering if I could have prevented my own rape if I'd been stone cold sober or worn jeans rather than a skirt on the night of my attack. I've kicked myself more times than I can count for "freezing" and therefore failing to physically fight back as I said "no" and "stop" over and over again.

For rape survivors with PTSD, dissociation is common and it makes it hard to recognize ourselves — Jane's PTSD flashbacks are a spot-on depiction of how the condition manifests itself in this way. In these scenes, she appears to be watching herself during and immediately after the assault, which illustrates the way survivors often detach themselves from the experience. In an interview with Seventeen, college rape survivor Grace Turner explained how detachment comes into play during the attack itself: "I just stared at this one spot on the ceiling while he continued to rape me for another three hours," she said. Jane's detachment and frequent "out of body" experiences are common symptoms of PTSD.

The depiction of Jane's PTSD also makes the incredibly important point that people don't simply "get over" rape. As Jane tells Madeline, she knows the pain will always be with her — but she's determined to keep moving forward and give Ziggy a good life. Although the effects of trauma can certainly never be erased entirely, recovery from PTSD is possible — but Jane hasn't sought professional help or the support of family and friends. So, it's completely realistic that her PTSD is severe and appears to be intensifying as Ziggy asks more and more questions about his dad.

The conversation between Madeline and Jane is a pivotal moment because it marks the first time in over six years that Jane has told anyone about her rape. And, despite all her hilarious faults, Madeline was the perfect person to confide in — she showed viewers the compassionate way to respond when a friend tells you they've been assaulted.

Madeline makes clear that she's there to listen, but she doesn't press Jane for details — and, most importantly, she is completely nonjudgmental. She doesn't ask victim-blaming questions about alcohol consumption or whether or not Jane really fought back "hard enough." And, she doesn't lecture Jane for not reporting the crime — this happens often and it can be heartbreaking for survivors when we're told that if our attacker strikes again, we'll be partially to blame.

Jane has taken an important first step by speaking the truth and accepting Madeline's support. But, it seems like things will get worse before they get better — Jane now owns a gun and has decided to find Ziggy's father. If the two come face to face this season, it definitely won't end well.