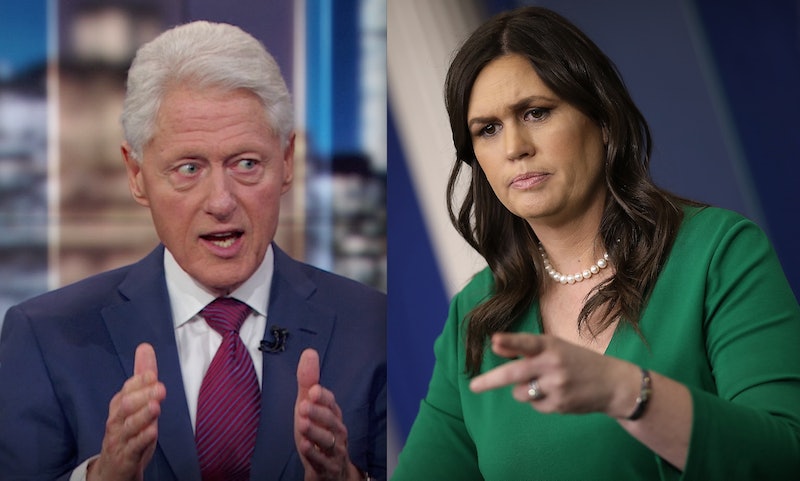 President Trump's press secretary has a high-profile new defender, and it's none other than the 42nd U.S. president, who appeared on Trevor Noah's show Tuesday to promote his new crime novel. During their conversation, Bill Clinton defended Sarah Huckabee Sanders, saying he has "a lot of respect" for how she reacted to being asked to leave the Red Hen restaurant in Virginia on Friday and that the incident shouldn't have occurred.

"That's a decision for the restaurant owner to make," Clinton admitted. "But what I'd like to point out is, would it be better if that didn't happen? I think it would."

He distinguished between what happened at the Red Hen and a seemingly similar event from his own presidency. He brought up a time when he was in church services and an activist got up to protest the fact that the president wasn't doing more to stop the AIDS epidemic. Clinton said that moment helped inspire him to double funding for AIDS research and treatment.

"That I thought was fine," he said. "Then you ask yourself, well, should you go from there to asking her to leave the restaurant?" The Red Hen incident — which occurred because the restaurant owner disapproved of Sanders' work in an "inhumane and unethical" administration, as she told The Washington Post — sparked a national conversation about civility in the Trump era.

Clinton argued that it was inappropriate to ask Sanders to leave. But he also said that much of the blame for a lack of civility in our current politics can be blamed on the rise of Trump.

"A lot of poison has been poured down America’s throat since that 2016 campaign," he said. "It started off [with] calling Mexicans rapists and murderers. So it's hard to pour poison down other people's throat and not have some of it come back up and bubble up."

Clinton noted that he respects how all parties dealt with the incident. He said his feelings about restaurant owner Stephanie Wilkinson were influenced by articles that clarified her side of the story. In an interview with The Washington Post, Wilkinson said that she'd been alerted to Sanders' presence in her restaurant when her chef called to tell her that staff members — some of whom are gay, Wilkinson noted, and so have a personal relationship to the administration's anti-LGBTQ policies — were "concerned" about it.

"I'm not a huge fan of confrontation,” Wilkinson told the Post. "I have a business, and I want the business to thrive." But she added:This feels like the moment in our democracy when people have to make uncomfortable actions and decisions to uphold their morals." So she went to her restaurant, pulled Sanders aside, and asked her politely to leave.

Clinton also brought up how he'd struggled when people were "personally hateful" to him during his time in office. He mentioned that advice from Nelson Mandela had helped him cope, probably referring to how Mandela told Clinton to let go of his anger during the Monica Lewinsky scandal. Clinton told Noah that he had to "work hard" at the time "not to respond in kind" to personal attacks he says he received in legal proceedings from Kenneth Starr — the independent counsel during the investigation — and others.

"Sooner or later, people need to quit tearing each other down and go to work," Clinton told Noah. "But I think you can't foment as much hatred as has been fomented by the administration without having a blowback. So if they want to have more civility, they need to stop the name-calling and take the lead."