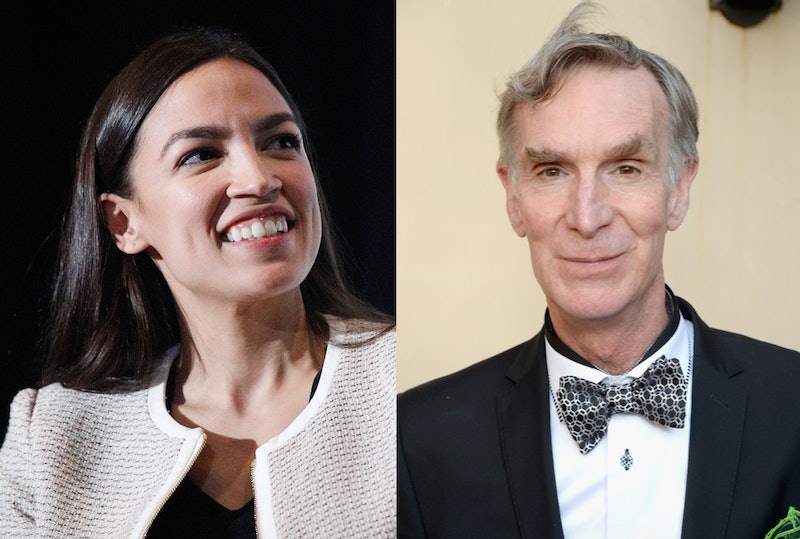 Worlds collided at Austin's South by Southwest festival this weekend, where television host and activist Bill Nye endorsed Alexandria Ocasio-Cortez's approach to fighting climate change and income inequality. The so-called "Science Guy" made a surprise appearance during a talk led by the freshman congresswoman, and even participated in the event's Q&A session, according to The Huffington Post. In a follow-up tweet, Nye said that Ocasio-Cortez "gets it."

The tweet included a selfie of the pair, apparently taken at the festival.

Ocasio-Cortez and Nye have both made names for themselves in the fight to combat climate change. Last month, in conjunction with Sen. Ed Markey in the Senate, Ocasio-Cortez introduced her highly-anticipated Green New Deal before Congress. The non-binding resolution takes aim at climate change by focusing on renewable energy, environmentally-friendly public transit systems, and and reducing pollution, among other goals.

The deal has received a lot of criticism from many Republicans, as well as some moderate Democrats. However, Nye made clear this weekend that he was definitely on board with what Ocasio-Cortez is proposing.

During his appearance, Nye contended that the root of many social and political issues was fear. That, he said, included resistance to combating climate change.

“I’m a white guy,” Nye said, according to multiple reports. “I think the problem on both sides is fear. People of my ancestry are afraid of having to pay for everything as immigrants come into this country. People who work at the diner in Alabama are afraid to ask for what is reasonable. So do you have a plan to work with people in Congress that are afraid?"

He continued: "That’s what’s going on with many conservatives especially when it comes to climate change. People are afraid of what will happen when we try to make these big changes. When we address climate change, we're going to have access to clean water, the internet and renewable electricity for everyone on Earth."

Ocasio-Cortez responded that overcoming such obstacles requires the courage not just of one person, but of many.

"Courage begets courage," she said. "The first person who stands up has to encounter the most amount of fear and discomfort, but once that one person stands up, it becomes immensely easier for the second person and the third."

It's unclear whether Congress will ultimately adopt the Green New Deal. As with climate change itself, it's proven to be incredibly polarizing. Although science has proven that climate change is very real and humans are contributing to global warming, opinions on the issue tend to fall along party lines.

"One of the keys to dismantling fear is dismantling a zero-sum mentality,” Ocasio-Cortez said on Saturday, according to Newsweek. But, she added later, "We can give without a take. We’re viewing progress as a loss instead of as an investment. When we choose to invest in our system, we are choosing to create wealth. When we all invest in them then the wealth is for all of us too.”

More like this
Are John Legend & Kanye West Still Friends? The Singer’s Latest Update Is Candid
By Brad Witter
Rishi Sunak's Wife Is Worth More Than The Queen
By El Hunt
Beyoncé Will Change The Lyrics To “HEATED” After Backlash Over Ableist Slur
By Marina Watts
Christina Aguilera Took A Powerful Stand At Brighton Pride
By Sam Ramsden
Get Even More From Bustle — Sign Up For The Newsletter