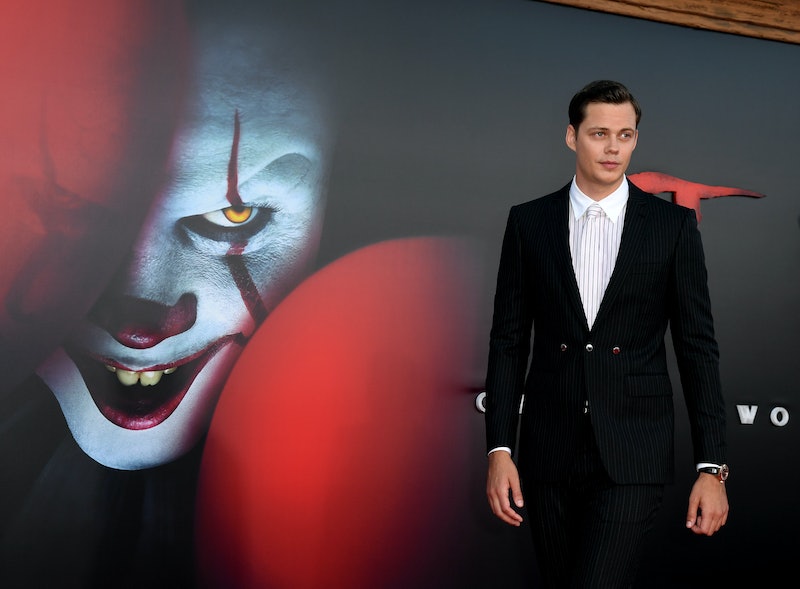 Even if you haven't forced yourself to watch It and the newest horrifying on-screen interpretation of Pennywise the Clown, there's no doubt you've heard all about it. Bill Skarsgard inhabited the role of the creepy clown with the terrifying laugh in It, and now he's back for It Chapter 2. And, if you couldn't tell by his name, acting is in his blood. Bill Skarsgard’s brothers are almost all actors, with credits including award-winning films, shows. And it can all be traced back to their dad Stellan Skarsgard.

Bill Skarsgard was born in Vällingby, a suburb outside of Stockholm, to parents Stellan and My Skarsgard, although they divorced in 2007. Even though they're not together anymore, and Stellan has since remarried, Bill's oldest brother Alexander Skarsgard told the Los Angeles Times in 2012 that they're all still a very close family. “My parents still hang out, are still best friends and still spend Christmas together," Alexander said. "Dad likes to cook every night, so Mom will come over and have dinner with Dad and [new wife] Megan [Everett] and all the kids.”

There are a lot of Skarsgards, as you can tell, so here's a bit of a rundown on Bill Skarsgard's siblings, and where you might recognize them.

Alexander Skarsgard is definitely the brother you might be most familiar with. He made his mark on Hollywood playing the bloodsucking Eric Northman on the HBO series True Blood. And most recently he portrayed Perry Wright in the HBO series Big Little Lies, for which he received an Emmy, a Golden Globe, and a SAG Award. Other than his father Stellan, Alex has the most experience in the field of acting (and the longest IMDB credits), but Bill doesn't go to him, or his father, for advice. "They were always encouraging, but I’ve tried not to seek advice from them, because I wanted to feel independent,” Bill said in an interview with The New York Times in September of 2017. “As I grow older and more comfortable with who I am, I realize asking for help is important."

Gustaf is the second oldest Skarsgard brother. He played Floki in the History Channel series Vikings and appeared as Karl Strand in the second season of the HBO series Westworld. In an interview conducted by Stellan Skarsgard for Hero Magazine, Bill said that even though he had three famous relatives as he started acting, he was still pretty confident in himself, not really thinking about that. "I’ve never been worried that I will be compared to [his father] or my brothers, or not be as good," he said. "...I’ve never really put myself in the same kind of category, you know what I mean? I’m doing my thing and you guys will always be doing your thing."

Sam is the third oldest, and he is the only one of Stellan and My's kids who did not go into some type of entertainment profession. According to ScreenRant, he did, however, follow in his mother's footsteps, choosing to become a doctor instead. While talking to his brother Alexander for Interview Magazine in June of 2017, Bill applauded his brother's career choice. "There’s definitely a sense of embarrassment about what it is artists really do, at least for me in terms of acting," he said. "We have a mom and a brother who literally save lives... I’m constantly embarrassed at the level of attention actors get and the level of money that we get. It’s completely disproportionate."

As the only girl in the family, Eija has a pretty unique spot in the Skarsgard clan. She didn't take on acting like a lot of her siblings did, but she was a model. However, based on her social media, it doesn't seem like she's currently in that profession anymore. She did just get married, as seen on her Instagram, with her father Stellan in attendance. In an interview with Elle in 2013, Alexander Skarsgard said that since Eija was the only girl, she was definitely the one in charge. “When my sister Eija was maybe two and a half years old, she and my brother had an argument," he recounted. "Eija couldn't write, so she said, ‘Dad, write this down: Girls are always right.’ He taped that up on the kitchen wall. It's still hanging there.”

Valter is the youngest brother, aside from Skarsgard's children from his second marriage, and he's just starting to get into acting. He played Jon in Arn, and is pretty big in Sweden, but has yet to be in a US production like his brothers. And, as ScreenRant pointed out, Valter got his first acting role before the age of 10, just like his brothers. He'll surely be on American big screens soon — if he chooses to go to Hollywood, that is.

And Of Course, Stellan Skarsgard

And that leaves you with Stellan Skarsgard, the one who started it all. Stellan has been in movies since the '70s. Though he started off his career in Sweden, Stellan made the jump to Hollywood with his role in 1997's Good Will Hunting. Since then he's been in so many hits, it's hard to keep track. From Mamma Mia, Pirates of The Caribbean, Cinderella, to The Avengers, he has taken on a wide variety of roles in major box office hits. And even though his profession inspired a lot of his kids, he said he never encouraged that route, per se. “I never gave them any advice on that,” Stellan told The Irish Times in 2014. “I taught them as young children to like themselves and to be on time. I never interfered.”

At the end of the day, Bill Skarsgard might come from a super talented family of actors, but the work he does as Pennywise in the It franchise is all his own.

More like this
Revisit 1992’s 'A League Of Their Own Cast' Photos After The New TV Series
By Grace Wehniainen
Before 'Bullet Train,' Revisit These Brad Pitt 'Fight Club' Premiere Photos From 1999
By Grace Wehniainen
Twitter Is At Odds Over Taylor Swift’s Possible ‘All Too Well’ Oscar Run
By Brad Witter
Amanda Seyfried Says She Felt Pressured To Shoot Nude Scenes At 19 Years Old
By Jake Viswanath
Get Even More From Bustle — Sign Up For The Newsletter