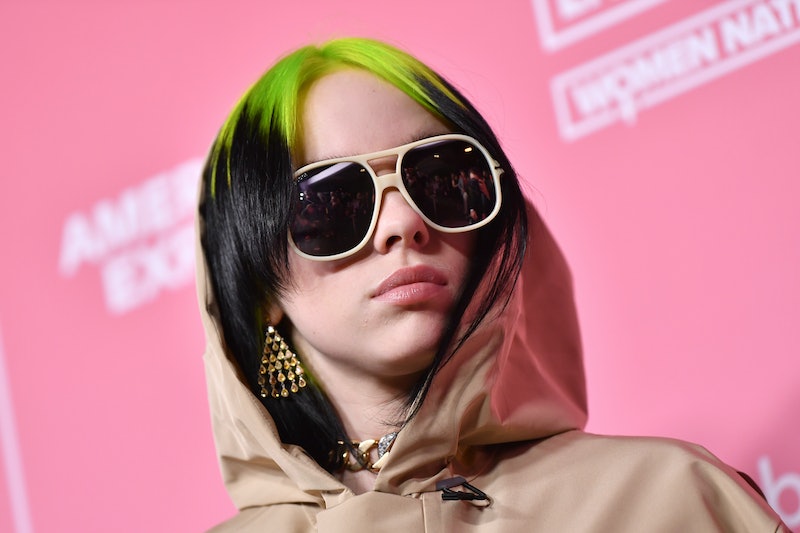 Before 2020, only a single artist had scored the Grammys big four: best new artist, record, song, and album of the year. Billie Eilish changed that, becoming the second artist and first woman to nab the honor. Now, she has another quartet to celebrate: a Vogue cover. And Billie Eilish's Vogue cover isn't a single cover at all but four different imaginings of her captured by three different photographers and one 16-year-old illustrator.

The "When The Party's Over" singer graces Vogue sporting oversized streetwear, including a sized up Versace parka (with a print reminiscent of Jennifer Lopez's famous Grammys gown); a striped Gucci shirt and matching necklace; and a lime green Prada jacket that perfectly matches her famous lime green roots. In the final cover, Eilish is illustrated by 16-year-old Russian artist Nastya Kovtun wearing a dress from Nicolas Ghesquière's pre-Fall 2020 Louis Vuitton collection.

In every single cover, whether created by an acclaimed photographer or illustrator, the Grammy winner's signature style is fully visible. And Eilish's penchant for oversized hoodies and free-flowing motorcycle pants is a topic of conversation in her interview with the magazine. She tells Vogue that her singular sense of style has always been predicated on what she wants, not the sartorial trends of the moment.

Eilish explains that she's worn exactly what she likes since she was a child, recalling a time when she would take items she found at Target and sew them into new creations. She tells the magazine, "I just wanted to invent shit, so I did. When I look back at myself at 9 or 10, my style was unbelievably terrible. But it was exactly what I wanted to wear. I was committed to it, I wore it, and I was happy."

Eilish's conversation with Vogue isn't the first time she's discussed her fondness for oversized streetwear. She previously told ELLE that while yes, she prefers the style for now — in part because of people's inability to sexualize her in looser silhouettes — all that could change when she turns 18. "I’m gonna be a woman. I wanna show my body," she said at the time.

Eilish has turned 18 now, but she's retained that same sense of fashion. And her personal style is on display everywhere from her Vogue covers to red carpets where she rocks Gucci leisure suit separates with pride. No matter how Billie Eilish's style evolves in the future, one thing is evident: it will always be genuine and undeniably cool.

More like this
Beyoncé Wore A Golden Sheer Gown At Her VIP Dubai Concert
By Sam Ramsden
The Biggest Fashion Moments Of Paris Couture Week 2023
By Dominique Norman
10 Times Haley Lu Richardson Dressed Just Like Portia
By Dominique Norman
Twitter Memed Doja Cat's Red Schiaparelli Look & I Am Cackling
By Dominique Norman and Kelsey Stiegman
Get Even More From Bustle — Sign Up For The Newsletter
From hair trends to relationship advice, our daily newsletter has everything you need to sound like a person who’s on TikTok, even if you aren’t.