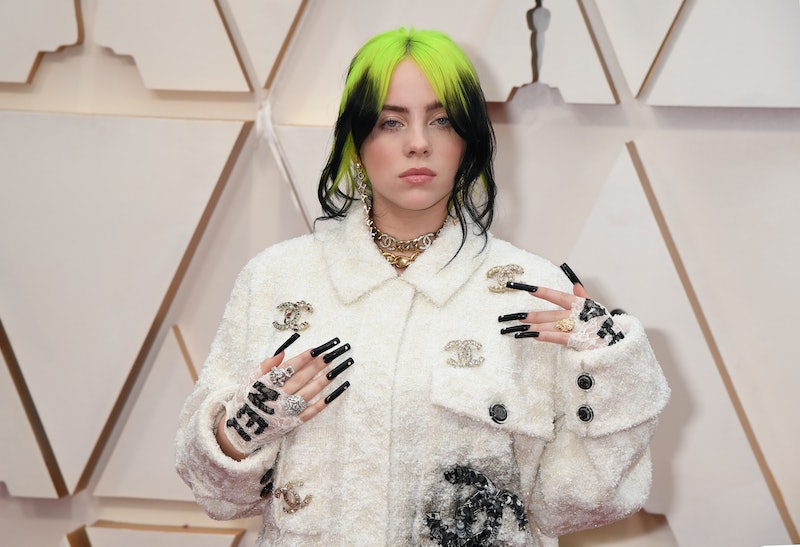 While being interviewed on the 2020 Oscars red carpet, Billie Eilish reminded everyone just how young she is. Decked out in Chanel, the 18-year-old told Billy Porter that some of her favorite movies growing up were The Babadook and We Need to Talk About Kevin... which came out in the very recent years of 2014 and 2011. Naturally, it made the internet feel incredibly old.

Eilish's brother, 22-year-old Finneas O'Connell, said his were The Social Network (2010), Moneyball (2011), and "kind of anything Aaron Sorkin had anything to do with."

"Oh, and these are films from your youth?!" Porter responded, stunned. "Uh huh."

Twitter felt pretty much the same as Porter did. "I'm not old, but watching Billie Eilish and her brother respond to the question 'What movies did you like when you were growing up?' with answers like The Social Network was quite an experience!" tweeted one viewer.

As difficult as it may be to learn that the Eilish was only 12 when The Babadook came out, her long black nails sort of invoked A Nightmare on Elm Street's Freddy Krueger, which makes sense considering she said her favorite genre is horror. Twitter user @WalterWhiteRab1 called the singer's look "post-apocalypse Miley Cyrus."

Eilish and O'Connell continued talking about movies with Louis Virtel and Sydney Park for The Academy. "I mean, Parasite really blew my mind," Eilish said, also citing Oscar nominees Once Upon a Time in Hollywood and Jojo Rabbit, the latter of which she and her brother had just watched.

In addition to performing during Sunday night's In Memoriam, Eilish will be singing the next James Bond theme song, which she told Billy Porter she and O'Connell had already written. "It's done!" she said. "It's crazy, dude. It's a life goal for sure." A life goal at the ripe old age of 18, that is.

More like this
The 'Love, Lizzo' Harry Styles Scene Is Just 1 Moment That Made Fans Feel Seen
By Brad Witter
Billie Eilish Has An Exciting Relationship Update About Her Boyfriend
By Grace Wehniainen
Olivia Wilde & Harry Styles Are Reportedly "Taking A Break" After Almost 2 Years
By Jake Viswanath and Radhika Menon
Jennifer Lopez Shares Rare Holiday Photos Of Ben Affleck & Her Twins
By Radhika Menon
Get Even More From Bustle — Sign Up For The Newsletter