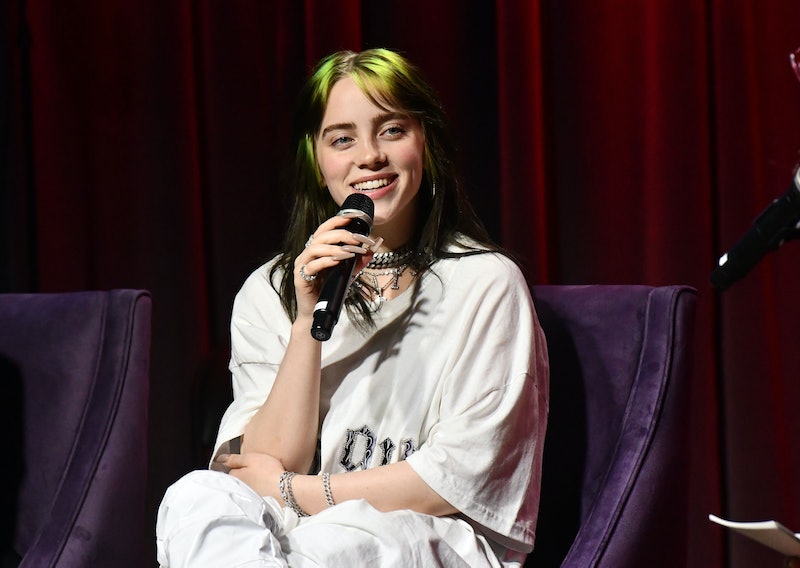 For the coolest teenager in the music industry, there is one thing more important than watching the Grammy nominations be announced: sleeping in. During a recent appearance on Jimmy Kimmel Live! Billie Eilish admitted she slept through the Grammy nominations, and her actual response to finding out that she made history was incredibly on brand.

The singer — who became the youngest person in Recording Academy history to earn nominations in all four general categories on Nov. 19 — revealed to host Jimmy Kimmel that her mother had to wake her up to share the big news. "That went up at, like, 5 a.m. I’m not gonna wake up for that!" Eilish said with a laugh, referencing the early morning announcement on the west coast, where she lives. "I was knocked out. My mom came and woke me up and I was, like, half asleep, like, 'Cool,'" she recounted.

Eilish earned six nominations at the 2020 Grammy Awards, including Best New Artist, Song of the Year and Record of the Year for "Bad Guy" and Album of the Year for her incredibly successful debut album, When We All Fall Asleep, Where Do We Go? (She is also up for Best Pop Vocal Performance and Best Pop Vocal Album.) "BETWEEN ME & MY BROTHER ITS 11 NOMINATIONS," an excited Eilish wrote on Instagram, acknowledging that her brother, Finneas O'Connell, is also up for the prestigious Producer of the Year, Non-Classical award.

Despite sleeping through her history-making morning, Eilish is aware of the significance of earning so many Grammy nominations this year, especially because, as she said, she grew up watching the awards show every year with her family. "I mean, the Grammys is the Grammys," Eilish said. "As cool as everything else is, it’s like, the Grammys. I’ve watched that every single year of my entire life."

Though she joked that she used to watch to judge all of the "ugly ass dresses," people wear to the ceremony, Eilish revealed that Grammys night was a family affair in her household. "Every year, my family and me, we would all sit in the living room and watch the Grammys. We never missed it, so the fact that I’m the same little girl watching that in my living room, and then I’m still in that same living room being nominated for six? Like, what is that?"

Regardless of all of her success, Eilish admitted to Kimmel that she's still adjusting to being a world-famous pop star. "I’ve loved attention my whole life, but I don’t think anyone knows what fame actually is. Because if I did want to be famous — it wasn’t this kind [of famous]." To cope, she's made her mental health a priority, which means bringing a therapist and friends with her on tour. And now, with six Grammy nominations, it seems like Eilish is in a place to celebrate and truly enjoy all of her success.