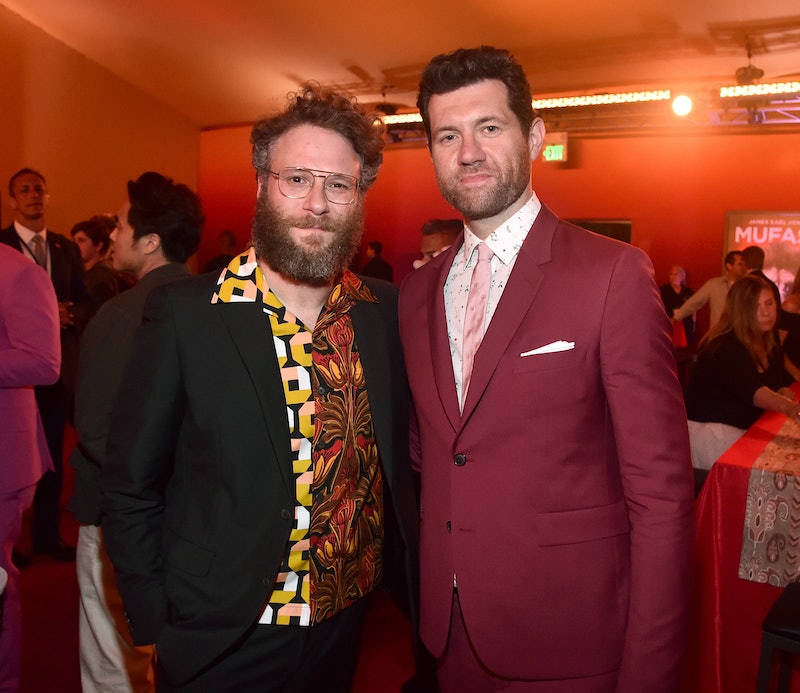 The prospect of meeting members of the royal family, while very exciting for some people, is bound to make anyone nervous, including the entire cast of The Lion King — except Beyoncé and Jay-Z, apparently. Meghan Markle and Prince Harry appeared at the London premiere of The Lion King on Sunday, July 14, and Billy Eichner was very nervous to meet them, as seen in a video posted to Twitter. Billy Eichner's reaction to meeting Meghan Markle and Prince Harry with Seth Rogen is extremely adorable and very relatable.

While waiting in line with the Lion King cast to greet the Duke and Duchess of Sussex, Eichner was, as he commented on Twitter, "freaking out." Luckily, he had his on-screen scene partner, Rogen, on hand to help him prepare for the big moment. "OMG here I am completely freaking out to @Sethrogen about how I’m going to greet Prince Harry and Meghan I’M CRYING," Eichner tweeted on Monday, July 15, sharing video of himself pre-introduction.

As seen in the video, he turned to Rogen, who was seemingly standing next to him off-camera, and asked if he should say "pleasure to meet you" to the royal couple. "Is that bad?," he wondered. The comedian made his decision upon seeing that co-star Keegan Michael-Key did not greet the couple by saying "pleasure to meet you," instead simply shaking their hands and bowing his head. "He didn't say it," Eichner told Rogen, in an all-important conversation about protocol.

After sharing the video on Twitter, the comedian gave an update on his meeting with the Duchess, writing in a follow up tweet that Prince Harry and Markle "were both super down to earth and lovely." He added, "Meghan and I talked about our @NorthwesternU acting teachers." And, yes, Eichner did open with "Pleasure to meet you."

Before the fateful meeting, Eichner told Entertainment Tonight that he was thrilled to meet Markle and Prince Harry. "I'm very excited [to meet her and Harry]. I never even thought about meeting them, or thought I would have an opportunity to, and they seem very cool, so I'm excited," he said. And as it turns out, he actually has a connection to Markle that most wouldn't expect: they both were students of Northwestern University.

"Actually Meghan Markle and I went to the same college," he said to ET. "We both went to Northwestern. We were both theater majors at Northwestern, and I think she was a freshman when I was a senior, so I'm going to see which acting teacher she had and if we can compare notes," he said, even joking that they would be "out all night" at the after-party.

Based on Eichner's tweets and video of their encounter shared on Twitter, it seems like part of the comedian's predictions came true. The two did discuss Northwestern. So, who knows, perhaps they also had some fun at the after party.

Of course, that wasn't the only exciting celebrity encounter Eichner had at the film's UK premiere. He also officially got a photo with his co-star Beyoncé, which he shared on Instagram with the caption "BILLYONCÉ." And just like that, a superstar couple is born.

Needless to say, it was a big night for Eichner, Markle, Beyoncé, and really, everyone blessed enough to see these images.

More like this
Reese Witherspoon Confirms This Fan Favorite Will Return For 'Legally Blonde 3'
By Jake Viswanath
Taylor Lautner Copped To Finding Jacob "A Little Annoying" In Twilight
By Stephanie Topacio Long
James Cameron May Come To Regret His 'Titanic' Door Experiment
By Stephanie Topacio Long
Vanessa Hudgens Is Reportedly Engaged To Cole Tucker
By Jake Viswanath
Get Even More From Bustle — Sign Up For The Newsletter
From hair trends to relationship advice, our daily newsletter has everything you need to sound like a person who’s on TikTok, even if you aren’t.