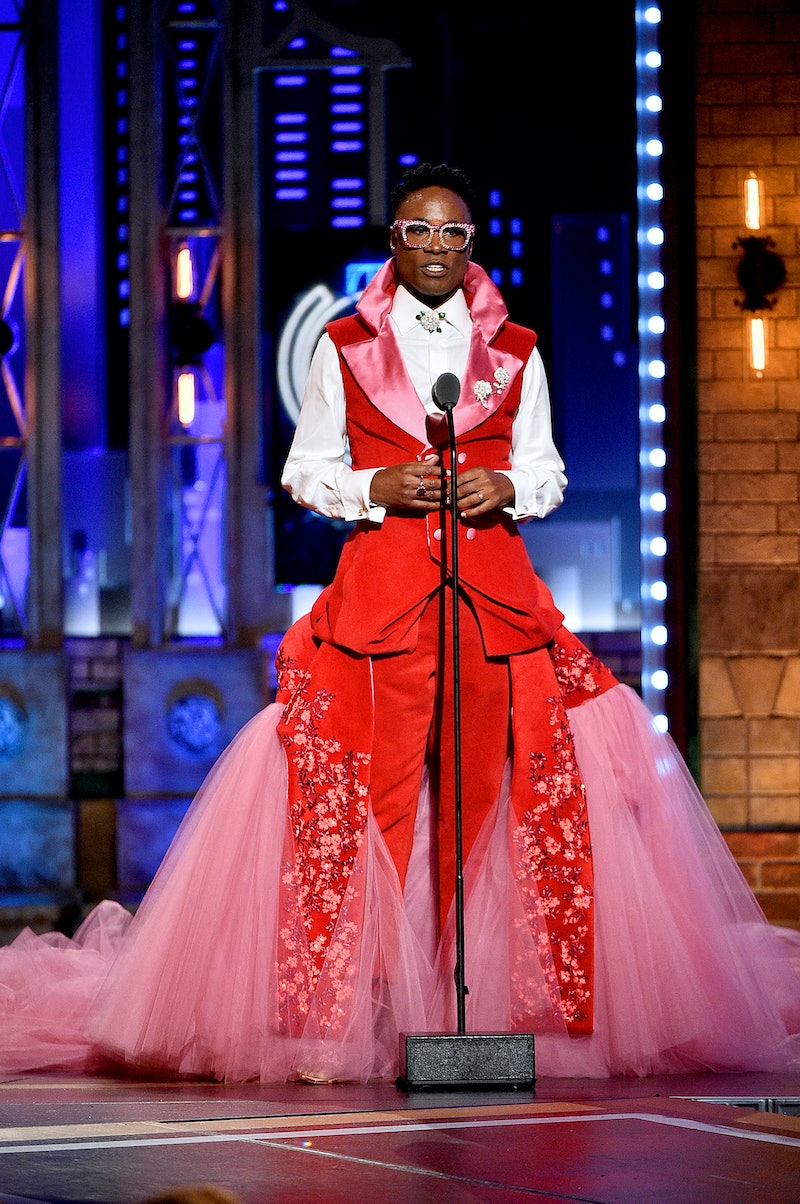 Billy Porter's fashion hot streak continues, and he effectively shuts down every red carpet at which he appears. Billy Porter's 2019 Tony Awards outfit was a dramatic and glamorous hybrid of a gown and a suit. It featured a white dress shirt and a red vest with pink satin lapels and buttons, along with red pants. It also featured a massive pink and red tulle train. The outfit was constructed from the same red curtain that fell for approximately 1,150 shows during Porter's Tony Award-winning run in Kinky Boots, according to The New York Times. It also included more than 30,000 Swarovski crystals, according to the press materials received by Bustle. While Porter's outfit was an unforgettable and ethically sourced from repurposed fabric, his accessories were just as wow-inducing. Case in point: Porter's reading glasses, which he wore multiple times throughout the night.

UPDATE: Porter's reps responded to Bustle via email, confirming that "Sam Ratelle sourced the lenses and frames from Native Ken, then worked with Mercura NYC to design them into the Swarovski crystal-encrusted specs."

During his red carpet interview with Entertainment Tonight, Porter wore the super sparkly pair of pink eyeglasses with silver trim along the arm. He didn't wear them during red carpet photos. However, the extraordinary eyewear made an encore when the actor took the stage to present an award at the June 9 ceremony.

The glittery glasses matched all of the pink details that dominated his outfit. They were also expertly coordinated with the floral pins he wore on his lapels and the brooch that fastened his shirt.

Every single element of Porter's Tonys outfit was well thought out, as if anything else was remotely possible. But the stylish and sparkly specs were not just a stunning finishing touch to an otherwise epic and somewhat sentimental ensemble. It turns out the glasses may have an even deeper meaning.

As fans and fashion watchers are well aware, glasses have factored into many of Porter's past looks. Porter revealed that his husband, designer Adam Porter-Smith, is actually the original architect behind this element of his personal style. "Adam outfitted me in all those glasses," Porter said about his penchant for memorable frames back in 2017, according to Playbill. "He was the person that created that branding for me, that branding from the Gap…the big chunky glasses." The couple also worked together on a range for Porter-Smith's Native Ken eyewear line.

It would seem like a logical assumption that Porter-Smith created this gloriously extra eyewear for Porter's Tonys look. Bustle reached out to Porter's reps for further details about the glasses.

As for Porter's gown-dress, stylist Sam Ratelle enlisted Celestino Couture, which designs upcycled and socially conscious pieces, per The New York Times, to create his 2019 Tonys look. The outfit went through several iterations that eventually morphed into the fabulous look you saw at last night's ceremony. Porter also paired his Tony's outfit with an embellished evening bag and mules.

Porter's 2019 Academy Awards look was a custom Christian Siriano creation that has the same spirit as his Tonys look. The full, velvet skirt was another unforgettable fashion flourish. The Pose also actor offered incredibly poignant insight into his approach to fashion. "I'm invited to red carpets and I have something to say through clothes," Porter told Vogue. "My goal is to be a walking piece of political art every time I show up. To challenge expectations."

From the tux dress to his gold-dipped Met Gala ensemble to the Tonys eyewear, Billy Porter is all about making impactful and unexpected fashion statements.