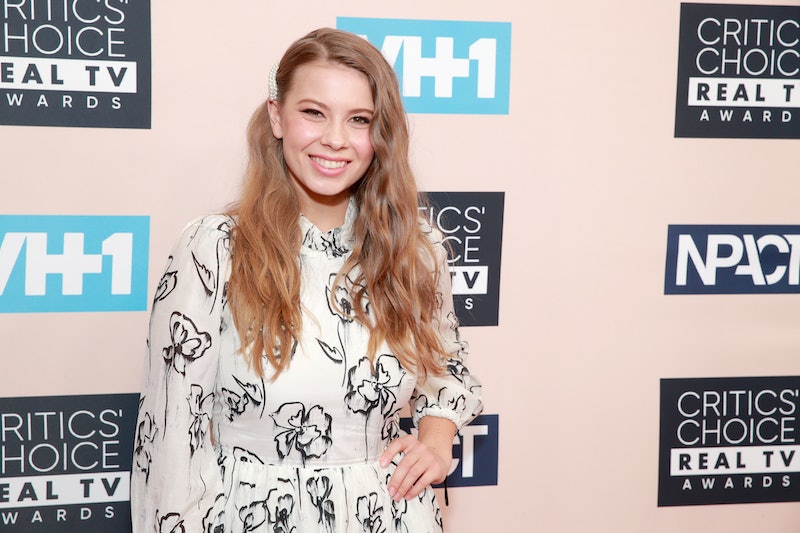 As you might have heard, conservationist Bindi Irwin celebrated her 21st birthday in a major way — by getting engaged to her boyfriend of six years, Chandler Powell. According to the Daily Mail, she's already gotten a jump-start on the wedding planning. To get even more specific, Bindi Irwin will honor her father Steve Irwin on her wedding day in a couple of incredibly special ways.

In an interview with Entertainment Tonight with her fiancé, Irwin detailed that she is planning to honor her father in one very specific way on her special day. She told the publication that she plans on having her brother, Robert Irwin, walk her down the aisle, stepping into the role that her father would have taken. "I think that for me, it'll be really important that Robert walks me down the aisle," she said, "That's something that I really want to do." She continued to share,

"I'm always so grateful that Robert is there, and he has been such a big part of my life and he's always stepped up and been the one to give me a hug when I need it and encourage me forward in life. So he will definitely be the one to walk me down the aisle when the time comes, and I think that will make it really special."

Irwin added, "And I think that's what dad would have wanted as well."

It already sounds as though Irwin has some super meaningful plans in store for her big day. And, as she continued to share to ET, she's also planning on honoring her father in one other way. According to the 21-year-old animal expert, she's going to have her mom, Terri Irwin, step in for her late father when it comes to the father-daughter dance.

"I think, if I was going to do a dance, it would be with my mom. My mom and I are so close. She's my pillar of strength in life and I love her beyond description," she shared, and continued to say, "So I think, when the time comes, Robert will walk me down the aisle, [Chandler and I] will have our wonderful moment and I'll have my dance with mom. I think that would be wonderful." Just like she said, these special plans are indeed a wonderful way to make sure that Steve's spirit is still present on her special day.

The couple previously announced that they were engaged on July 24, as they both detailed on Instagram. Powell popped the question to his longtime girlfriend on her birthday and "in her very favorite place in the zoo." Clearly, Irwin's fiancé made sure to make the moment special for his longtime love. As she detailed on her Instagram account, the Australian native appreciated the thoughtfulness he put into the proposal and wrote, "I’m so looking forwarding to spending our forever together as your wife. Here’s to a lifetime of friendship, purpose and unconditional love."

Not only does it sound as though the pair's wedding day will be full of meaningful moments, but it's clear that their marriage will also contain a lifetime of love.