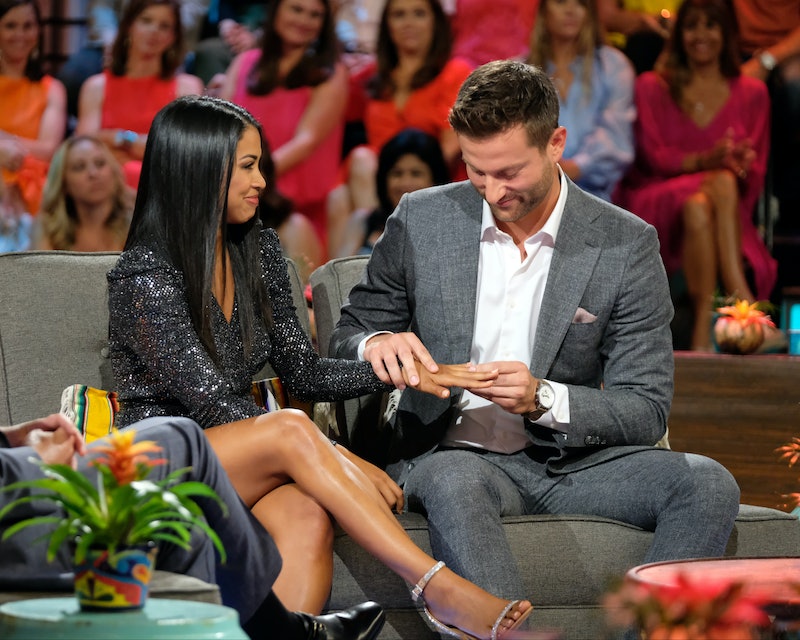 With multiple Bachelor in Paradise couples splitting up recently, fans may be wondering if Katie Morton and Chris Bukowski are next. Although they got off to a rocky start on the reality show and recently sparked some split speculation, Katie confirmed she and Chris are still together while appearing on Ben Higgins and Ashley Iaconetti's Almost Famous podcast on Monday, saying the two are doing "so much better now."

During the podcast interview, Ben asked Katie about the status of her relationship with Chris, and she clarified they're "dating and engaged" (which typically isn't something you hear everyday, but makes sense in Bachelor Nation). Although Katie took her engagement ring off during the BiP after show and they argued on-screen, things have improved between them quite a bit. "We're not perfect, we're never going to be perfect," she said. "My relationship with Chris is definitely different than any other relationship I've ever had, but different isn't bad." While Chris hasn't addressed their relationship in any interviews recently, he shared a couple-y photo with Katie on Instagram just last week.

Speculation that Chris and Katie may have ended things picked up over the weekend when Katie attended a wine mixer with other Bachelor couples — Jared Haibon and Ashley Iaconetti, Joe Amabile and Kendall Long, and Krystal Nielson and Chris Randone — without her fiancé at her side. But in the comments section of the post, Jared told a fan that Katie and Chris are "together and very happy."

Recently, there's been an influx of breakups among the couples who left Bachelor in Paradise's most recent season together. Last week, Tayshia Adams and John Paul Jones announced their split, admitting that their busy schedules and the distance between them made it "impossible to see each other and build a life with each other." Just a day later, Demi Burnett and Kristian Haggerty announced their breakup in a lengthy joint statement on Instagram, telling fans that although they still loved each other, what's best for them is "being apart and growing individually."

Katie and Chris are now among the last two couples standing from BiP Season 6, along with Hannah Godwin and Dylan Barbour. Hannah and Dylan recently solidified their relationship status with matching Sandy and Danny Grease costumes for Halloween. And while Katie and Chris haven't posted any Halloween pics together themselves, at least the split speculation is officially put to rest.