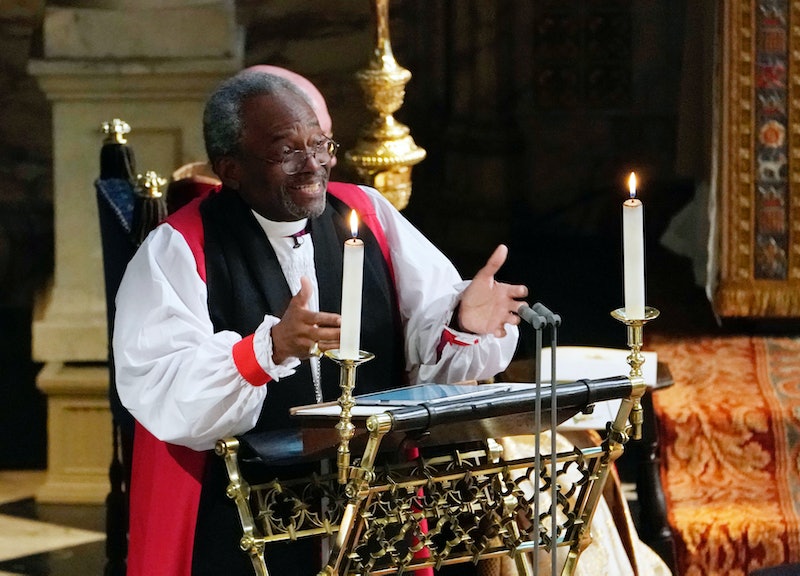 Everyone was anticipating the royal wedding of Prince Harry and Meghan Markle to be ultramodern — after all, it is 2018. Where tradition was broken at almost every turn — for the better — new traditions were also forged. And during the ceremony itself, Twitter was quick to notice one particularly modern detail: namely, that the Most Rev. Michael Bruce Curry, the Episcopal bishop who was slated to give a reading at the royal wedding, read his sermon off an iPad. Though the bishop’s dynamic speech did not involve much of his scrolling through his prepared notes (in iBooks? In the notes app?), people on the internet were living for the iPad’s bright light emanating from the pulpit.

The bishop’s moving speech made reference to the Song of Solomon, which Lady Jane Fellowes, Princess Diana’s sister, had read from earlier in the ceremony, and made reference to Reverend Martin Luther King, Jr., and the power of love. The Most Rev. Curry also honored the power of fire in his speech, noting that without fire, we would not have texting — and presumably, neither would he have the iPad from which to read the speech. The presence of technology, of course, did not detract from the bishop’s stirring sermon, but it did become a focal point for the ever detail-hungry internet.

What was even more impressive about the bishop's use of the iPad was that he barely even had to use it: the Most Rev. Curry kept his eyes on the rapt crowd the entire time, with emphatic hand gestures that negated his very ability to refer back to what people are now calling "the Holy iPad."

Other folks across social media noted that the bishop's official Twitter account, @pb_curry, appeared to be updating throughout the service with contemporaneous links and commentary. (Insert side eye emoji here.) Though more likely than not, a staff member not currently at the altar of the royal wedding would be manning the account, as is usually the case with other dignitaries, but the updates did spark commentary.

Other folks were similarly blown away by how modern the ceremony was overall, iPad notwithstanding. You gotta admit, Markle's gorgeous boatnecked dress did feel extremely 2018.

And others were able to comment on the many, many, many extreme hats in the audience (also called fascinators) as well as commentating on the presence of an iPad.

But even with the surprising presence of an iPad at the royal wedding ceremony, the vast majority of the Twitter commentary hinged around the bishop's ultramodern and moving sermon, which referenced Facebook and Instagram in addition to texting. "When love is the way, there is plenty of room, plenty of room for all of god's children. Because when love is the way, we actually treat each other well, like we are actually family," the bishop said to the spellbound audience. Bishop Curry had reportedly been planning to give his sermon on the power of love since he was asked by the happy couple to give the address. ""The love that has brought and will bind Prince Harry and Ms. Meghan Markle together has its source and origin in God, and is the key to life and happiness. And so we celebrate and pray for them today," he reportedly said, per a statement on the royal family's website.

Bishop Curry is the 27th bishop of the American Episcopal church, and was the first Black person to serve in that capacity when he was elected to the post in 2015. Curry is known as an outspokenly political member of the church, and his moving address this morning was no exception.