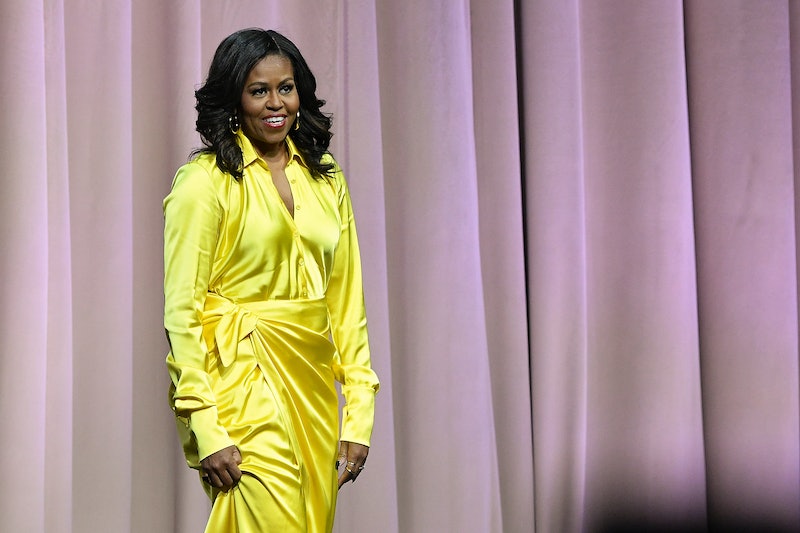 The UK’s first festival dedicated to black girls and women Black Girl Festival will be celebrate the work of Michelle Obama, everyone's fave, in a free three-day held in London this April. BGF x Becoming Festival takes place from April 9 to April 11 2019, and it's an event you seriously won't want to miss out on.

To celebrate the HUGE success of her memoir Becoming, Black Girl Festival and Penguin will be hosting the free three-day event at Canada Water Library in South East London to celebrate former first lady Michelle Obama. The festival is for ages 11 and upwards, and is inspired by the themes of Obama’s book. The event promises a whole host of fun, educational, and thought-provoking activities, including creative writing workshops, history lessons on black British Feminism, poster making workshops, and conversations between black women in the creative industries. Tickets for the event are available here, they're totally free but those wishing to attend must register to be eligible.

As well as the BGF x Becoming festival another event — Becoming: An Intimate Conversation with Michelle Obama — will be held at the O2 on April 14. There are still some tickets available to buy here. Last year, Obama’s talk at the Royal Festival Hall in the Southbank Centre sold out in a matter of minutes, as Bookseller reports, so move quickly if you want to be in the crowd this time around.

The former first lady smashed records last year with her book Becoming. It came in at number 1 on the UK's top sellers list at the end of 2018 and sold over 2 million copies in North America in the first 15 days alone. On top of book sales, tickets to Obama's talks across the globe have proved to be widely sought after and near impossible to get hold of.

Black Girl Festival is an annual one-day festival held in London celebrating all things black women and girls. It was founded by journalist Paula Akpan and curator Nicole Crentsil back in 2017 after a triumphant crowdfunding campaign. “We wanted to create something we wished we had for our younger selves,” says Akpan. Last year, the sold-out festival featured a talk with singer NAO, workshops on decolonising contraception, finance masterclasses, and craft stalls filled with artwork, jewellery, and homemade cosmetics.

The theme of Black Girl Fest 2019 is "Taking Up Space" and the event will be held at London's Business Design Centre on Oct. 12. In a statement about the aims of this year's festival, Akpan and Crentsil said, "We want to break down barriers and create new seats at the table. From tech, literature to hair and beauty, we want to take up space across various industries and champion inclusivity." The super-accessible festival also offer free spaces to Black girls and women who can't afford tickets and a "pay it forward" option which allows those who can afford tickets to buy one for a fellow black girl or woman too.

BGF x Becoming Festival will be held at Canada Water Library in South East London from April 9 to April 11. Register for the event here.

Black Girl Fest 2019 is will be held at London's Business Design Centre on Oct. 12. Tickets are available here.

An earlier version of this article misrepresented Obama’s involvement in the festival. It has been updated.