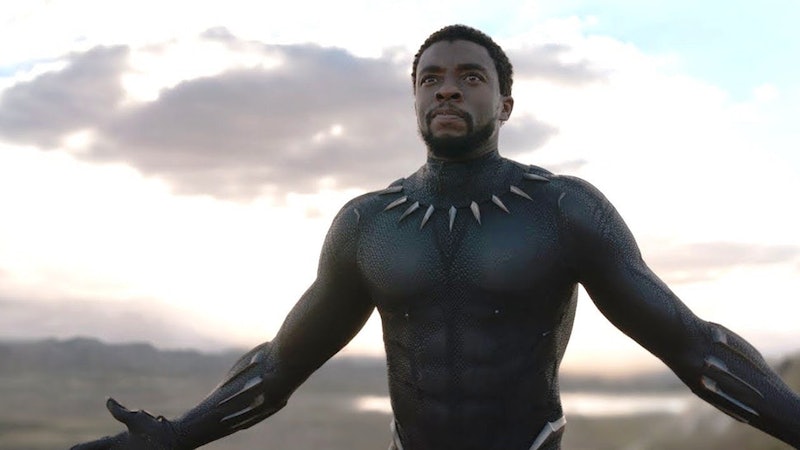 Unless you've been living under a rock for the past year, you're probably at least somewhat familiar with the widely popular, Oscar-nominated hit film, Black Panther, which tells the story of T'Challa and his ascension to becoming King of Wakanda. However, if you were unable to watch this cinematic masterpiece play out on the big screen, you'll soon have a chance to right that wrong because Black Panther is returning to theaters in celebration of Black History Month for a one-week time period. And to top it all off — each screening is completely free of charge.

According to the official press release, there will be two showings per day at each of the 250 AMC Theaters participating in this exciting endeavor, which will last from Feb. 1-7. That means you can relive the magic of Wakanda on the big screen as early as this coming weekend. But if you're thinking it can't possibly get any better than that, think again. Additionally, the Walt Disney Company will also be giving a $1.5 million grant to support UNCF (United Negro College Fund) in furthering its mission to help minority students access and move to and through college.

"Black Panther is groundbreaking for many reasons, including the rich diversity of voices behind its success," Robert A. Iger, Chairman and CEO of The Walt Disney Company said in a press release statement, adding:

"The story also showcases the power of knowledge to change the world for the better, and the importance of ensuring everyone has access to it. We’re proud to provide thousands of free screenings of Black Panther in hopes it will continue to inspire audiences, and to support UNCF with a $1.5 million grant to make the dream of higher education a reality for more students."

UNCF President and CEO Dr. Michael Lomax also provided his own statement on the exciting news and what Black Panther has meant to the organization at large:

"We know that providing aspiring young minority talent with scholarships and professional development opportunities is vital to making their dreams a reality. UNCF is grateful for The Walt Disney Company’s enduring commitment to expanding these types of opportunities, and we’re excited to continue to do so through our Walt Disney Company/UNCF Corporate Scholars Program. I recall the excitement we all had when ‘Black Panther’ was first released and it’s fantastic that Disney is bringing the record-breaking movie back to the big screen so that we can relive that excitement. Wakanda Forever!"

If that doesn't inspire you to head to the theater, then nothing will. For its part, AMC is proud to be part of such a worthy cause. "Almost a year ago, movie-lovers were transported to Wakanda, and the guest response to Black Panther was unlike anything our industry has seen before," CEO and President of AMC Adam Aron said in a statement via the release. "AMC is excited this best-picture nominated film is once again accessible on the big screen at AMC. We are also pleased to play a constructive role in Disney’s generous support of Black History Month."

The Black Panther sequel may not have an official premiere date just yet, but at least fans have more Wakanda adventures to look forward to in the coming week to help quench our Marvel thirst. (To get your free tickets, click here.) Wakanda Forever, indeed!