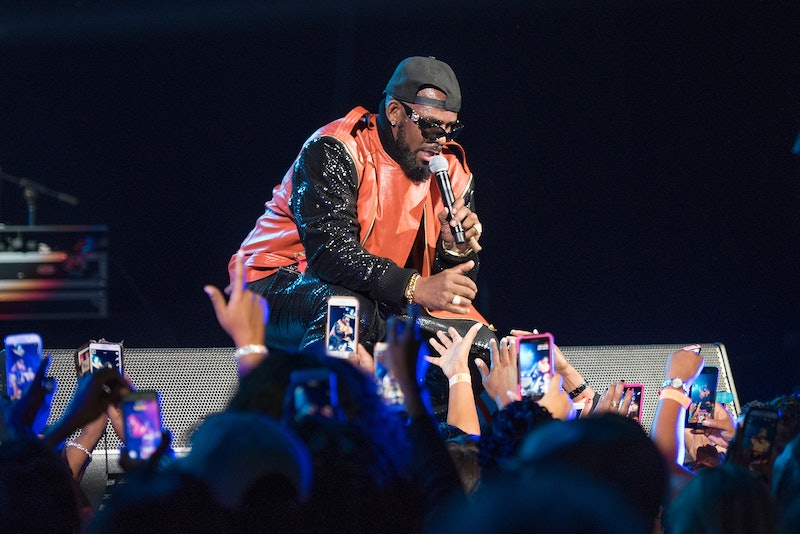 In March 2002, the offerings that the neighborhood bootleg DVD man had included Blade, Resident Evil, Ice Age, and a copy of the video featuring R. Kelly allegedly urinating on a 14-year-old minor, for which the singer was found not guilty of child pornography charges in 2008. I’ve long forgotten the face and name of the merchant who visited my grandfather’s convenience store every week, but I’ll never forget how he pushed the insidious video on all of his clientele. In front of me, then an eight-year-old girl, he declared he had "that R. Kelly jawn" everyone was talking about. I didn’t find out until I was much older what exactly everybody had been talking about.

We all remember the early 2000s for being a bit trashy — I blame the outfits — but it was also a period in which alleged evidence of an R&B singer’s sexual depravity sold like hotcakes from pirated DVD salesmen across the country. The tape would never earn Kelly any jail time, and his popularity as a R&B maestro soared. He still walks free, a fact made harsher by the realization that people paid cold, hard cash to watch the video — and dared to call the alleged teenage victim “fast” after the incident.

This was all I could think about while I was watching the new Lifetime documentary series, Surviving R. Kelly. It was all I could think about after watching the show, as tweets flooded the timeline from rape-apologists and sympathizers. A dizzying amount of people mirrored a statement made from the satirical animated show, The Boondocks: “If she didn’t want to get peed on, she would have moved out the way.” A 14-year-old black girl was placed on the same level of accountability as a famous 35-year-old man. To let them tell it, he was wrong, but she was fast.

This is the same kind of thinking that has plagued black girls for much of our history in this country. "Fast" is not a term exclusive to black people, but it certainly has its own implications in our community. It was the Europeans who first pushed the concept that black people, and black girls in particular, were hypersexual, as detailed in Black Sexual Politics by Patricia Hill Collins. During slavery, this idea was used to excuse horrific and violent attacks on black girls and women by white men. After emancipation, the sexual violence didn’t cease, and to combat it, many middle-class leaders of the black community decided to adhere to a fierce brand of respectability politics — when an oppressed group seeks security from abuse or discrimination by parroting their oppressor’s ideals and behaviors.

To let them tell it, he was wrong, but she was fast.

After all, white society placed white women on a pedestal as virtuous symbols of goodness. The erroneous thinking was that these good girls and women stayed out of trouble so they didn’t have to worry about rape. This didn’t protect white women from sexual violence, of course, but that didn’t stop respectability politics from thriving. Meanwhile, black women were considered organically immoral; as one North Carolina legislator declared in 1931, “It would take the United States army to correct the morals of all the negro girls.” In response, respectability politics dictated that black girls needed to behave “like ladies,” or effectively, like white women. Black girls who stepped outside of the boundaries of acceptable “lady-like” behavior (depending on region and culture), were considered fast.

Being fast meant you were asking for something. Being fast could mean wearing certain lip colors or hairstyles, tight clothing, showing age-appropriate interest in the opposite sex, or even receiving interest from peers and older men — regardless of whether that interest was welcome or reciprocated. These things were, and often still are, associated with the painful stereotype of black women as hypersexualized beings, which black leaders wanted to avoid. They didn’t see the harsh irony of making “fast” black girls the go-to defense of sexual predators, nor did they see that they had put the onus on “fast” black girls to protect themselves. Considering black women are disproportionately frequent targets of harassment — no matter our behavior or class — we are all at risk.

The use of “fast” to defy a stereotype and protect “good” black girls from harm actually does nothing but harm. Because “fast” is so subjective and varies in qualification depending on region and culture, it’s a ready-made excuse for predators taking advantage of vulnerable young girls. It's one that thrives because of long-held stereotypes created by white supremacy about black women. Even a goody-two-shoes black girl could be considered fast if her behavior is viewed in the lens of embodying a white supremacist stereotype of hypersexuality. From wearing red lipstick, to wearing eye-catching clothing, to asking about sex, the normal things we do are made out to be wicked, rendering us into unsympathetic victims if ever we are put into harm’s way.

Though the documentary has spurred a criminal investigation into the singer’s alleged actions, ultimately, there will be those who still bump R. Kelly's music without shame. Whether it’s because they claim they can separate the music from the artist or insist that these "fast-tailed" girls were lying, they are enablers of tragedy at the hands of R. Kelly.