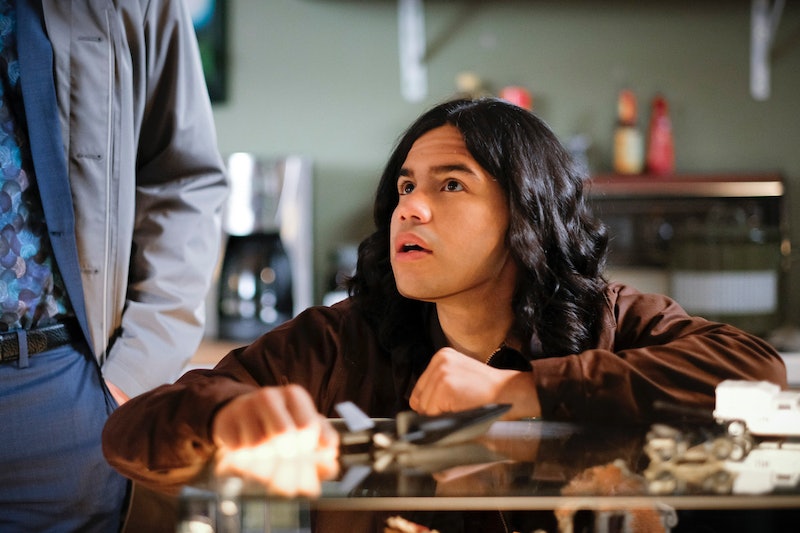 The good news: Barry has finally vacated his prison cell. The bad news: he's now in another, more high tech prison cell courtesy of Warden Gregory Wolfe. While Team Flash was busy dealing with a metahuman with the power to shrink (and un-shrink) things and people, Barry got caught in Iron Heights on "Honey, I Shrunk Team Flash" and, long story short, the Blacksmith has Barry on The Flash. This new development is either exactly what DeVoe wants, or it's going to throw the Thinker off his game — we'll have to wait and see.

Stuck behind bars and unable to be the Flash, Barry's hero complex is going out of control. So much so that when he hears Big Sir tell him that he's innocent of the murder that landed him jail, he makes it his mission to clear his name. A quick call to Iris, and Team Flash is on the case. Coincidentally, they run across the man who might have committed the murder Big Sir was convicted of while tracking down a meta who shrunk Kord Industries' newest building. The man, it turns out, is one of the bus metas, and Team Flash finds him pretty quickly. But, of course, things don't go smoothly, and Cisco and Ralph are shrunken, leaving the team in the hilarious position of having to take care of them. Eventually, the team was able to return Cisco and Ralph to their normal, human size, and catch the bad guy! However, things don't work out so well Barry.

The meta they catch refuses to confess to the murder pegged on Big Sir, and so he was to remain in jail. Barry, not happy with this turn of events, takes matters into his own hands. When the rotating camera is off him, he speeds into Big Sir's cell, breaks him out and runs him all the way to China, where he confessed he'd always wanted to go. It's a sweet gesture, and one that temporarily satisfied Barry's desire to do good. However, it ended up causing more harm than good.

Suspicious of Barry and his interest in Big Sir, Warden Wolfe put a secret camera on Barry's cell, and Barry's quick jail break was more than enough to provide him with proof that Barry is the Flash. And he's not about to let that go. Wolfe, it turns out, isn't really a by-the-book warden. He even admits to Barry that he's a "monster" when he drugs him and then locks him up in a cell for meta humans. After Barry is subdued, Wolfe calls Blacksmith, aka Amunet Black, and tells her he's got something good for her. So, Wolfe is planning on selling Barry to Blacksmith, already a very unfortunate turn of events. But is it part of DeVoe's plan? Or is it a coincidence that just might throw the Thinker off?

Harry thinks that the coincidence of Barry being in jail with an innocent man who happens to be paying for the crime of one of the bus metas is just too much. It must be part of DeVoe's plan. Assuming Harry is right, and DeVoe planned to get Barry in a meta jail cell underneath Iron Heights, how does that play into his plans? We know that the bus metas Barry apprehended earlier in the season are also down there, so it could be that DeVoe is looking to make one large jail break and pick up some powerful allies. Or maybe he just wants to make sure Barry cannot leave his prison cell for a while, giving him freedom to carry on his evil plans. If, however, this isn't part of his plan, then Barry's temporary abduction could be a good thing. After all, it's about time DeVoe was knocked off balance.

One thing that will hopefully catch DeVoe off guard: Cecile's new power. In this episode it was revealed that Cecile's pregnancy has somehow activated the black matter she was exposed to during the particle accelerator explosion, giving her the temporary ability to read minds. I expect that to come in handy sooner rather than later.