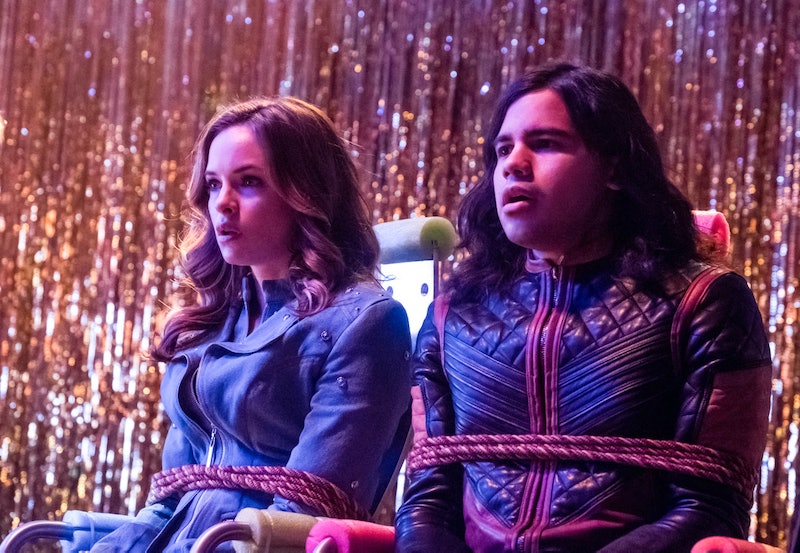 Ralph Dibny stepped up to finally become the superhero he was destined to be in The Flash's "The Elongated Knight Rises." Stepping in to protect Central City while Barry is locked behind bars is no easy task, but, with some help from Caitlin/Killer Frost, Cisco/Vibe, and Iris, Ralph is able to become Elongated Man. But, it wasn't until after, when Ralph and Cisco were getting celebratory coffees, that the episode got really interesting. The mystery waitress from The Flash returned, and she might be connected to the Speed Force.

At the end of the episode, Ralph and Cisco stop by Jitters and start to fight over who was going to pay, when the mystery waitress interrupts. She slaps down some cash to pay for the coffee, babbling about a theory that essentially says that everything is related and that every action has infinite consequences. She's sweet, and wearing an Oregon Trail t-shirt, which endears her to Cisco, but she's too smart for Dibny to hit on. Instead, they leave Jitters with a quick thank you and leave the mystery girl behind. Sitting at a table in Jitters, the mystery waitress jots down notes in her notebook — using the same symbols Barry was writing after coming out of the Speed Force.

Given her awkwardness, her desire to crash Iris and Barry's wedding, and context clues, this connection to the Speed Force seems to confirm the theory that the waitress is actually Dawn Allen, Barry and Iris' daughter from the future. But, even if she's not, all signs point to her having some connection to Barry. What exactly that connection is remains unclear. The symbols have also been related to The Thinker's cap, so there is always the possibility that the waitress isn't as innocent as she seems. Could she be working with the Thinker? If she is working with the Thinker, then you'd think she'd have tried to make some kind of nefarious move by now. No, all signs point to her having a connection with Barry — a positive one.

In this episode, the waitress was talking about infinite consequences, a Butterfly Effect or Flashpoint, if you will. Consequences and balance are what the Speed Force are all about, and they're also part of the Thinker's powers of deduction. The Thinker has been saying he knows the future before it happens, but what he knows is probability and educated guesses — consequences. Whatever these symbols are, they are definitely important to the future and potentially to how Barry can defeat the Thinker this season.

For now, however, Barry has bigger fish to fry then the mysterious symbols and a maybe daughter from the future. As a former cop and new kid, Barry's safety in jail is not guaranteed in the least. Luckily, he finds a friend in Big Sir, a huge, intimidating, and quiet man who doesn't want to be bothered, except when he steps in and saves Barry from a group of potential attackers. It turns out, Big Sir was a friend of Barry's dad when he was in jail, and now he's Barry's friend behind bars. Hopefully, Barry won't be in jail for long. With Iris and Joe combing over the evidence against him and Cisco working on figuring out how to infiltrate the jail's security cameras, Barry might be on his way out sooner than we think. Either he'll be cleared and free to go, or he'll be able to phase out of jail and make some Flash appearances before Central City figures out he's gone.

Until Barry is released, fans just have to hope that Dibny, Cisco, Caitlin, Harry, Iris, and Joe have Central City covered.