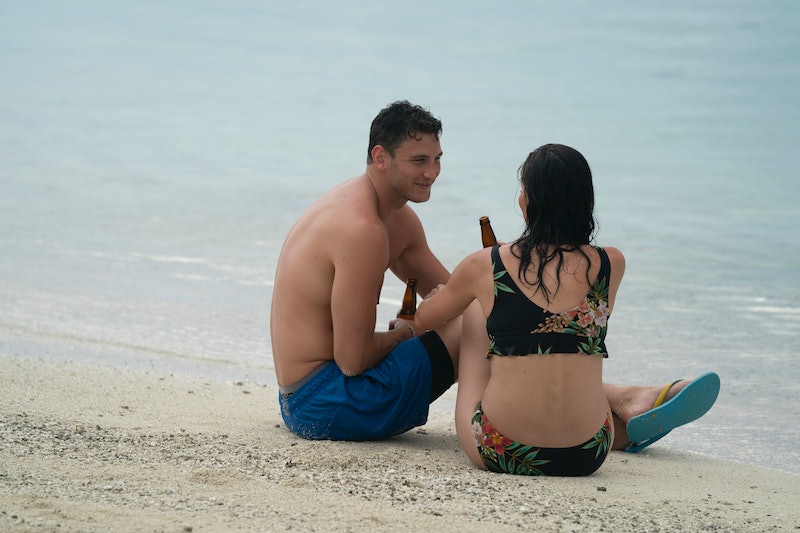 Breakups aren't easy, but breakups on national television are way worse. For instance, when you're about to propose to the women you think you're in love with but have only really known for eight weeks and she's like, "Welp, I love another guy that I've known for the same amount of time and want to marry him instead." That happened to Blake on The Bachelorette, and he got his beautiful little heart smashed to bits. But it's Blake's reaction to Becca and Garrett's Bachelorette engagement that will truly make you want to give him a cuddle or 70.

Blake hasn't had the easiest life — on the show, he talked about how he found out his mother was having an affair with his coach in high school. If that weren't difficult enough for a teenager, he survived a tragic school shooting around the same time. But despite it all, Blake has a positive, upbeat attitude and a heart that's open and ready for love. Unfortunately, his connection with Becca wasn't enough for her, long-term, and, on a beautiful, scenic vista in the Maldives, Becca broke up with Blake in favor of Garrett. She was nice about it, but, boy, was it brutal. She said:

Blake Horstmann, you made me hopeful again. You made me smile again. You have been the most solid, constant relationship, and one that I could turn to, anytime. I knew that you would be there and that you would be a partner to me and a teammate. And you’ve made me know that I can fall in love again. But for all that, too, because we were so constant, I think I was overlooking other relationships. because we were so solid, I wasn’t seeing everything. There’s just one piece with somebody else that I am not ready to say goodbye to yet. Quite honestly, I pictured this moment with you standing here for so long. I think that we could be right and we could be partners, but I think there’s just a better fit for us out there.

Blake was, obviously, devastated, and he wanted to know how he could be so sure and so wrong about his relationship with Becca. It wasn't anything he did, Becca said — it was just that Garrett is a better fit.

Blake cried unlike anyone we've ever seen cry on The Bachelorette, and in a sit down with Chris Harrison on After The Final Rose, Blake's emotions were still running high. "A lot of the season has been difficult to watch, but to see myself, you know, as hurt I was, it’s not easy," Blake told the Bachelorette host. "You just never, ever really consider that one day you’ll have a ring, and you’ll be moments away from getting down on one knee and committing yourself to the woman you love, and she says no... It’s hard to be so sure of something and someone and be so wrong at the same time."

Blake said he "never considered" that she would say no, and that the ease of their relationship was perhaps a warning sign. "The red flag was that there were no red flags," he said. When Becca came out later in the show, he said that there were no hard feelings and that he wished her the very, very best. True to form, right?

Blake being as gracious and wonderful to Becca after getting his heart smashed into little bitty pieces is the kind of forgiveness I wish everyone could muster. Though he is currently hurting, Blake will definitely land on his feet. His heart will heal, and for now, he's being kind and beautiful and... maybe the next Bachelor? Only time will tell.