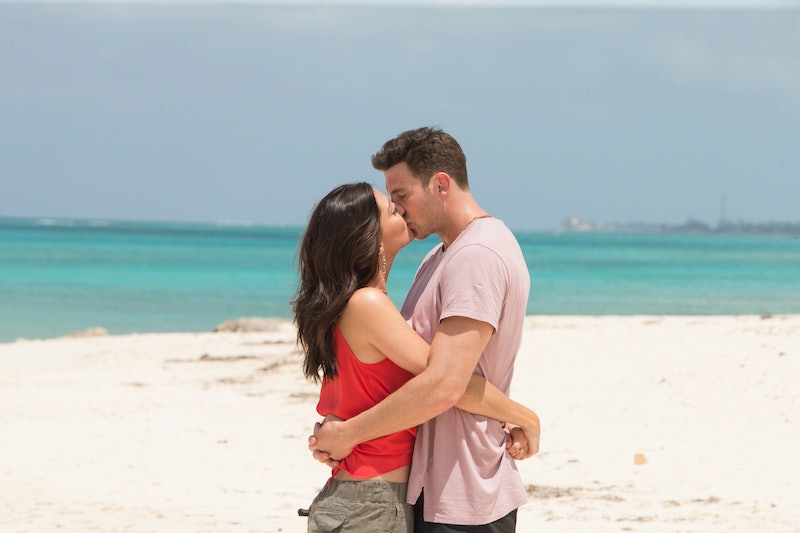 There are certain words that people obsess about hearing — announcements that you won the lottery, getting that new job, and, oh yeah, the love of your life professing love for you, too. Bachelorette Becca was right in the middle of that in the June 23 episode — Blake's romantic conversation with Becca on The Bachelorette had Twitter seriously losing its you-know-what.

Blake has been head over heels for Becca since he stepped off that bull he rode in on (don't ask) that first night at the mansion. Now, he's finally allowed to express his feelings to her. Not that he wasn't allowed before, but, you know, his walls were up and he wasn't ready to feel and whatever else people say when they're on the show and they don't want to be emotionally vulnerable.

Things are getting real this week. It's Fantasy Suite time, when contestants decide if they want to "spend time alone together" without cameras (read: do it), and we all have to pretend like we don't know the outcome. Blake and Becca are clearly headed to the Boomtown (oh, like that's worse than "fantasy suite"), but before anything could happen, Blake had a lot to get off his chest. Like, confessing his love and hoping he won't get hurt kind of stuff. Blake said:

I’m more in love with you than I was for my ex. And to know how bad it hurts… how bad this heartbreak could end is… where the real fear sets in. It’s scary but I think, like, these last two weeks, it’s the first time I’ve started to think that you possibly feel that way with another guy that you do me. I think it’s kind of hit me hard… because it’s getting to the point where you clearly have strong connections to other guys… I can’t really ignore that anymore.

After some more sharing, Blake went with the closer. He said, "I’m the kind of guy who looks for a reason to stay, not a reason to go." Um, swoon much? Hello? I wasn't the only one who needed the smelling salts — Twitter was aflame with users feeling all sorts of ways about Blake's sweet, sweet declarations of love.

Some Were Ready With A Backup Plan...

If Blake is the Bachelor, boy, are there going to be a lot of contestant applications.

And Many Thought His Words Made Him A Winner

I never say never, but I'm rooting for Blake, too.

Blake is kind and handsome and smart and has a little bit of emotional baggage (he can feel things!), so in my head, he's already the front-runner for Becca's heart. Blake's as good a man as anyone can find, and Becca would be silly not to pick him. That said, he needs to stay out of his head and stop panicking during this whole process. (Which is definitely easier said than done.) And hey — if this doesn't work out, he can always be the next Bachelor. The fan base is obviously real.