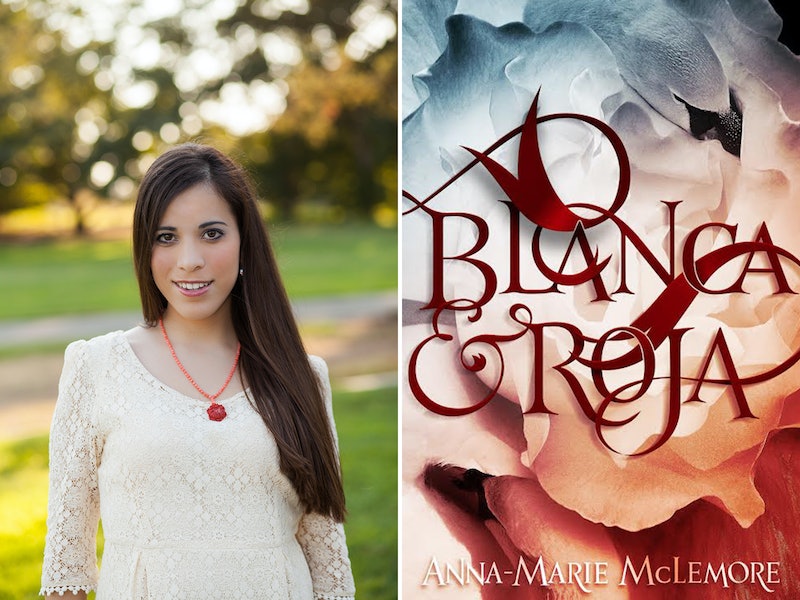 If you fell in love with the beautiful writing and vibrant storytelling in Wild Beauty, the October 2017 pick for Bustle's American Woman Book Club, I have some great news for you: award-winning author Anna-Marie McLemore has a new YA coming this year, and you're going to want to add it to your TBR immediately. A darkly enchanting retelling of the classic fairy tale Swan Lake, Blanca & Roja is out Oct. 9 from Feiwel & Friends, but Bustle is proud to reveal the cover and share an exclusive excerpt below!

Sister relationships are always complicated, but the one between the del Cisne girls goes far beyond standard sibling squabbling. Best friends and rivals, Blanca and Roja have been pitted against each other since birth by a curse that will force one of them to shed their human skin and live life as a swan. Like each set of sisters in their family before them, Blanca and Roja know they will be forced to play a dangerous game that will determine their fates, but when two of their childhood friends become unwilling participants, the girls must find a way to break the curse, or risk having each of their fates changed forever.

An irresistible dark fantasy about love, friendship, and the bonds of sisterhood, Blanca & Roja is a fairy tale adaptation unlike any other, and one only the magical realism master Anna-Marie McLemore could have written.

You have to wait until Oct. 9, 2018 to find out which sister gets to stay a girl, and which will be transformed into a swan, but Bustle as an exclusive peek at the cover and a excerpt from the upcoming novel. See the breathtaking cover for Blanca & Roja — illustrated and handlettered by Danielle Mazzella di Bosco — and read from the spellbinding story below!

Everyone has their own way of telling our story.

Some say it began generations ago, with a girl lured by the white birds in the woods. The moment she reached out a small hand toward their wind-fluffed feathers, a swan bit her, poisoning her blood.

Others say it started with a flock of swans gliding over our great-great-great-grandmother’s house. They flew overhead at just the right moment to hear her cursing her own family’s blood. So the swans cursed her, and all the daughters after her.

Some insist it was two sisters, squabbling for years over who was more beautiful. A bevy of swans in a nearby pond grew so weary of all the noise, and struck them with a spell that would take one of each of their daughters.

The worst one tells it this way: Once, a del Cisne woman—probably one of our great-great-great-grandmothers—stole a groom from his bride on their wedding day. The bride’s family hated our bisabuela and her name so deeply they cursed her brown skin to turn pale and her dark hair to become white feathers, and for the same fate to befall a del Cisne daughter every generation after.

These are the stories they tell, tales of winter storms or spiteful witches. Because when there is a family in which one of every two daughters grows an ink-black bill and a pale-feathered neck and snow-bright wings, people like to think they know why.

These are the stories they tell, tales of winter storms or spiteful witches.

Few think to ask us.

This is the story we believe to be true:

A mother once raised her daughter among swans, hoping they would teach her their grace and beauty. And this daughter, with the swans for her sisters, grew lovely in both appearance and manner. When she married, she bore only sons, three and then five and then ten sons. And though she loved her sons, she wanted a daughter, so that she, too, could raise a girl with the grace of swans.

So she went to the swans she had once called her sisters.

“Please,” she told them. “All I want is one daughter.”

“We will give you better than one. You will have two,” they said, with a magnanimous bow of their necks. “There will always be two daughters. But we will always take one back.”

“Which will you take?” the woman asked.

They lowered their wings. “That will be for us to decide.”

There may be as many versions of the story as there are daughters our family has lost to it. But this is the one my sister and I know. A woman wanting something so badly she did not understand the weight of the swans’ pronouncement.

Even when there were sons, there were always daughters alongside them, two sisters, whether they had brothers or not. Always two, always enough that the swans could take one and leave behind the other. My bisabuela had already raised three sons, sure she was too old for more children, when her daughters arrived. My great-great-aunt, intent on having one child, delivered, to her surprise, twin daughters. My second cousin thought she had defied the swans by having a single son and a single daughter, until the child thought to be a boy declared herself as the girl she had always been.

The way our aunt and our great-aunts tell it, our family never knows which daughter the swans will take.

But I’ve always known it would be me.

If I wanted to, I could believe everything was decided when we were born.

But I’ve always known it was earlier than that. And not just because the colors of girls are decided before they’re born, though that’s something I know to be true.

The way our aunt and our great-aunts tell it, our family never knows which daughter the swans will take.

But I’ve always known it would be me.

What I believe instead is that, in the moments of my sister and me becoming our own little lives, it was already written into us.

In the wisp of blood and not-yet-breath that was Blanca before she was born, there were already the beginnings of how her hair would grow as gold as October leaves.

Her eyes would be brown, the same as the rest of us, and that was something our mother would consider a great misfortune. But they were a brown as light as acacia honey, like amber. A brown that could be forgiven.

A few months after Blanca was born, I was a new wisp of blood and not-yet-breath. My own colors were already waiting. By then, Blanca had grown a crown of hair as fine and blond as a duckling’s down. Her tiny hands patted the growing round of my mother’s belly, where I was, slowly, becoming.

While my sister had a face as fair as the almonds my mother blanched each fall, mine would turn out as brown as the almond’s skin, dark and delicate, that my mother swept off the counters. I would have eyes and hair as dark as the coffee grounds my father spread over his roses in winter.

My hair grew not only dark as those coffee grounds, but red. Not the copper or strawberry of green-eyed girls, but deep red, a red so dark it looked wet. It was a red that wouldn’t take dye, not even the black walnut the señoras gave my mother. “Blood-soaked hair,” they called it, my mother shuddering at the words, my father saying them back with as much pride as if they were a new knife, fine and just sharpened.

My father counted it as such a point of pride that he named me for it, setting his hand on my small forehead and declaring me Roja while my mother slept off a birth fever. The kind of birth fever, the señoras reminded me on my birthday every year, that Blanca hadn’t given her.

“Blood-soaked hair,” they called it, my mother shuddering at the words, my father saying them back with as much pride as if they were a new knife, fine and just sharpened.

But my sister saw our story ending another way.