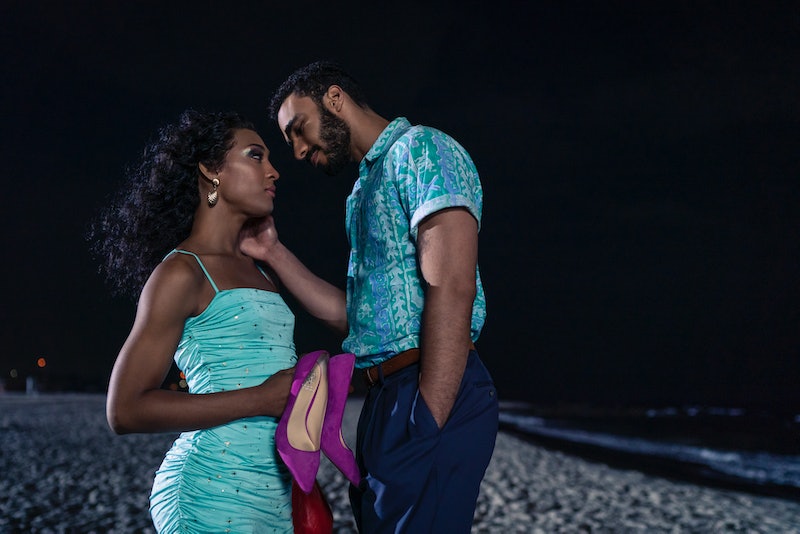 Spoilers ahead for Pose Season 2, Episode 8. The ladies from the former House of Abundance came together for an epic hot girl weekend at the beach and it was long overdue. Elektra, Angel, Lulu, and Blanca took a short road trip outside of the city and lived in luxury with a gorgeous house, sexy bathing suits, and a booze-filled dinner as they talked about their dreams, fears, and hope for the future. The episode was filled with iconic moments, but Blanca’s love story on Pose made pretty much everyone jump for joy.

After dealing with Candy’s death, Evangelista drama, modeling woes, and a dead body in a closet, Elektra decides that her former daughters need a girls’ weekend to recharge. So, the shady mother grabbed her fake driver’s license, convinced a client to use his house, and made sure her daughters pulled out their finest clothes as they made their way to see the ocean.

Sadly, Blanca admitted that she didn't enjoy summer because of transphobic harassment due to not passing and had never seen the ocean despite it being so close to her home. Angel also said she had never learned to swim due to racism at pools, so the pair decided to venture into the water together to face their fears. Things quickly went awry when Blanca nearly drowned – until a very sexy lifeguard went into full Baywatch mode to save her. The attraction between them was clear, but Blanca was afraid that would change when she says she is a trans woman.

Later that night, Blanca ran into Lifeguard Adrian at a restaurant and they took a moonlit walk on the beach. She cautiously hinted that she was a trans woman and he said he already knew but didn’t care because she was gorgeous, smart, and a nice woman, which is all facts. The pair kissed and Blanca strolled back to her girlfriends to reveal that he was the perfect gentleman who made her feel hopeful, wanted, and seen for the first time in a while. And, to her surprise, there was a voicemail from Adrian waiting for her when she returned home so it looks like this might be the beginning of a solidrelationship.

Of course, Twitter fans had a ton of reactions to Blanca’s potential new romance. Outside of the obvious comments about Adrian being hot, some people were simply happy that Blanca was getting some romantic attention. When Blanca asked Adrian if he had ever dated "a girl like her," he didn't outright answer the question but said "it's not like that" — a response that implies he is not ashamed of his attraction to Blanca.

But, others were understandably cautious about Adrian’s true intentions because he seems a little too good to be true. It always seems like the Pose ladies can never catch a break and, with the real-life dangers that trans women face, it makes sense for fans to feel super protective of Mother Blanca.