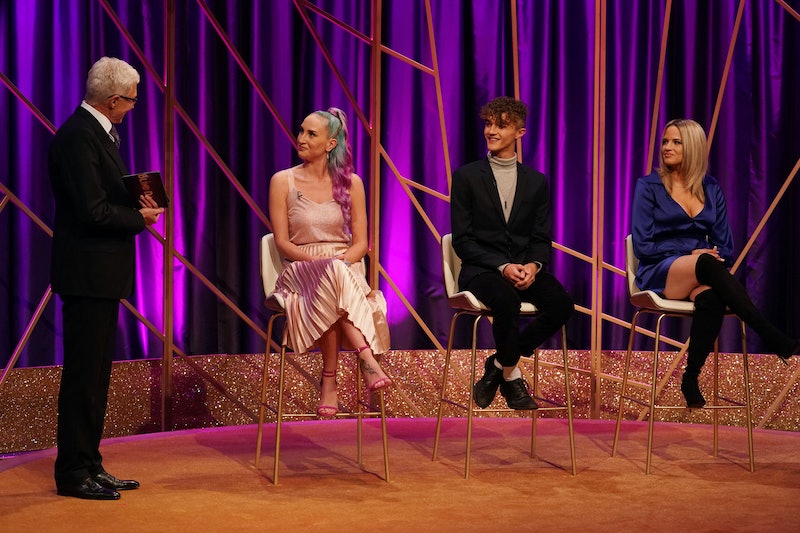 Back in Cilla Black's day, things really were more black and white by nature as well as name. The iconic dating show Blind Date — which was relatively recently rebooted — helped a lot of straight people get together (or argue, more likely), but everyone else was cast aside. That's why it feels like a bit of a moment now that Blind Date will introduce bisexual daters for the first time. The move follows a string of dating shows welcoming in contestants of differing sexual orientations — some are dubbing it 20BiTeen — and long may it continue, if you ask me.

As Digital Spy reported on Thursday, April 18, the new series of Blind Date will feature three bisexual contestants, and it'll go down in history as the first time the OG dating show has allowed its daters to pick men or women. The episode is reportedly set to air sometime in May, and it'll see beauty consultant Jordan getting to take his pick between support worker Lily, model Jesse, and French master's student Zoe.

Since the show's revival on Channel 5 in 2017, Paul O'Grady has been helping its blind daters look for love, as well as expanding the show beyond its typical heterosexual horizons.

Since the show's relaunch, gay and lesbian contestants have been welcomed onto the show, in order “to reflect the present day whilst maintaining the humour, charm and cheekiness of the original show," the show's head honchos said in a statement ahead of its premiere. And they're sticking to their word now that they're introducing bisexual contestants to their roster too. It's fair to say that O'Grady seems fairly chuffed to be a part of it. Speaking of the upcoming episode, he said:

“I’m delighted that Blind Date is continuing to be inclusive by giving a platform to those who identify as bisexual. It was a joy to film and I’m sure Cilla would have been proud.”

Serving almost two decades as Blind Date's iconic host, I can imagine that Cilla Black really would be happy with the show's progression. As O'Grady revealed in an interview with Gay Times from July 6, 2017 Black had previously fought for gay contestants to be included in the show. She was unsuccessful, of course. As O'Grady explained:

“At the time it was, ‘Oh no, we can’t have that.’ Because you know what the press are like. ‘Filth, disgusting.’ I love it when they get on their high horse and ride up to high moral grounds because the air must be very thin up there, that’s all I can say."

While media representation of gay and lesbian people has accelerated in past years, bisexual visibility on the screen – both big and little — has taken longer to catch up, but it is now finally getting its dues. Blind Date has thankfully positioned itself as a leader during this push for inclusivity, and follows in the footsteps the Courtney Act-helmed bisexual dating show The Bi Life, and shows like Channel 4's The Bisexual, which have given representation to an identity that's typically been glossed over. I hope that Blind Date's inclusion of bisexual contestants will inspire another much needed wave of bisexual visibility.