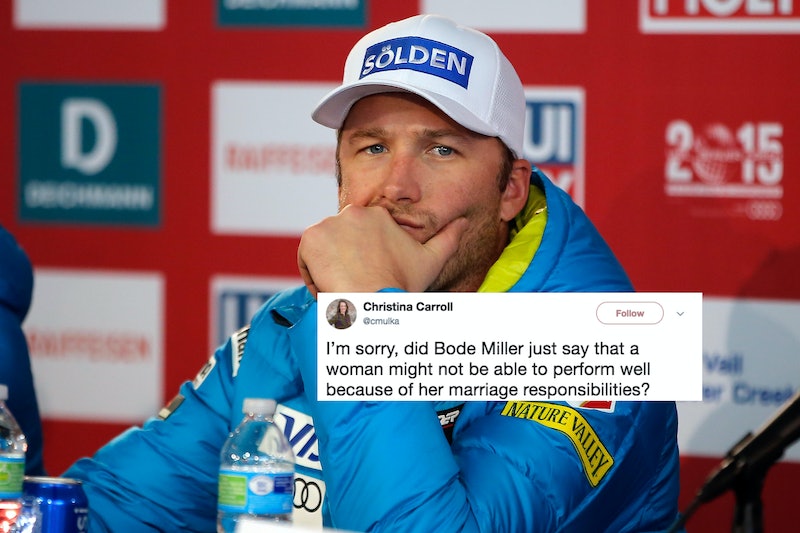 Sports commentators are known for their amusing, passionate, and at times harsh words during live events. They cheer at successes, try to explain why an athlete may have done badly in a particular event, and more. But when it came to one sports commentator and former alpine skier Bode Miller, his comments enraged Twitter at one specific moment.

Miller, who was dubbed "ski racing's former bad boy" by CBS Sports, got into the crosshairs of Twitter users on Wednesday when he commented on Austrian skier Anna Veith's shaky performance. The former skier is at the 2018 Winter Olympics in PyeongChang, South Korea, as an NBC commentator. While commentating an alpine skiing event on Wednesday, Miller can be heard saying,

I want to point out that she also got married. It's historically very challenging to race for the World Cup with a family or after being married. [It's] not to blame the spouses but I just want to toss that out there.

Almost instantly, Twitter users noted Miller's comment and called him out on it. Some found it incredulous that other commentators didn't criticize Miller for pointing at the athlete's marriage and demanded to know why his comment went unchallenged. Soon after sharing his controversial two cents on the performance, Miller tweeted a response to his critics. "To be clear I was not seriously blaming Anna Veith's lack of results on her husband. It's a changing of priorities that is historically hard, male or female," he said. Still, it looks like the damage is done.

One Twitter user said that Miller warranted the current criticism.

One Twitter user an Office gif with good ol' Pam to get their point across. In summary, they weren't surprised Miller said something unpleasant.

Some observers were surprised by how Miller wasn't called out for pointing to the athlete's marriage.

4. People Were Not Happy

One question came up again and again: Why wasn't the former skier, now commentator rebutted?

Others just made their point in straightforward and strong words.

For some observers, Miller's commentary painted double standards for male and female athletes. One Twitter user asked if he would have said the same thing about a struggling male athlete.

Another Twitter user simply told Miller that when he comments next time, he should try to avoid sharing personal opinions about relationships and keep them to himself.

It seems like words couldn't deliver this person's point across so they used a multiple facepalm gif to get their message through. That's four facepalms, to be exact. Four times the cringe.

For some, a short note like Miller should "calm down" was enough.

He probably just shouldn't have said it to begin with.

13. People Wanted Him To Be Quiet

Another person just wanted Miller to zip it.

Sometimes words aren't enough. No matter how articulate one is, the subject in front of them could be so boggling, a gif is the only way to be heard. For this Twitter user, Miller's commentary and then subsequent criticism from social media looked like that one time Homer Simpson tried to hide in the bushes.

Here's the deal. Sports commentary can be tricky at times, but it's always good to steer clear of any comments that stereotype athletes based on their personal life details. Maybe Miller will be more mindful next time. Here's to hope.