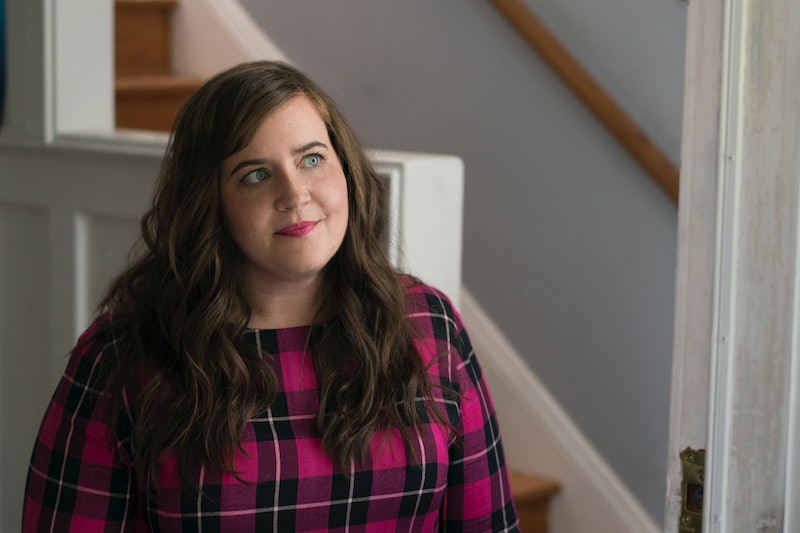 The unfortunate fact of the matter is that, even in 2019, the body positivity movement has only started to permeate mainstream television and film. Media is nowhere near where it should be when it comes to body inclusivity. Yet, recently scattered efforts have been made to correct this, including the Netflix film adaptation of the novel Dumplin’ and Hulu's series Shrill, based on Lindy West's memoir. But what actually makes content body positive? There's more to the movement than releasing a project or two that revolves around a fat lead.

Not every production needs to feature fat actors in lead roles, but body inclusivity goes much further and deeper than this. Seeing a fat character navigate their identity as a person of size is a win for the community, but it is not enough for fat characters to only be given agency when discussing weight. These characters should have viable storylines regardless of their size.

Content creators, networks, and streaming services have the opportunity to produce stories that will have a positive impact on their audience — to challenge the status quo of whose stories matter and where fat characters belong. So what steps can these companies take to be more body inclusive overall? Let’s start simply:

Any project aiming to be body positive should, for a start, have plus-size characters whose storylines do not revolve around fatness. “It's important that these shows normalize big girls, especially since big girls in this country are the norm,” says Janell Hobson, Chair of the Department of Women's, Gender, and Sexuality Studies at the University at Albany over email.

NBC’s This Is Us, for instance, introduced to a broad audience Chrissy Metz, an actor who has since become an outspoken advocate for body positivity. Her character, Kate, however, is a complicated case. Often, her storyline revolves around her dissatisfaction with her size, and in the very first episode, she begins a long diet journey. So while seeing Metz onscreen as a main character is a win for representation, her character’s storyline, in some ways, is a step back, portraying Kate in the way that fat people have been depicted for years: as individuals who hate nothing more than their size.

In the Netflix series Insatiable, for instance, Patty (Debby Ryan, first in a fat suit), detests the way she looks. And only after weight loss does she start to find confidence. These all-too-common plot lines promote the false notion that all fat people hate themselves until they force a massive change. We want to see fat characters who have well-rounded stories — even if that means occasionally thinking and talking about weight, because...

Shrill, for instance, is a great example of how to incorporate that discussion. Annie (Aidy Bryant) is not oblivious to the fact that she’s plus-size. However, the show focuses on her showing others that her weight does not place limitations on her happiness. Shrill sets out to show that fatness is not a hurdle to overcome, and that’s precisely why it exhibits body positivity so well.

Dumplin’ has a similar outlook. Yes, Willowdean’s weight is focal point, but not in terms of her having a distaste for her size. Rather, her size is a motive for her to inflict change and challenge mindsets, and she inspires people who feel marginalized for different reasons to do the same.

These stories, however, should not have women feeling as though they need to change physical properties of themselves in order to fit in and be accepted. “[Sometimes] women are expected to conform to femininity, which is often equated to thinness,” Hobson says. If weight is discussed, it’s crucial that it not be a jumping off point for a character to want to fit this thin ideal. Rather, it should be a launch pad for body positivity and normalization of fatness.

Body Diverse Casting Across the Board

Main characters are important, but that's not all there is to building a realistic world in a TV show or film. Body diversity should also be prevalent in the backgrounds of scenes. It may seem insignificant to have fat people as extras even when the leads are thin, but this shows a comprehensive commitment to the movement.

In addition, casting diversely in all roles makes a project feel much more authentic. Imagine about a series that takes place in a high school or college. Perhaps you’re thinking of 13 Reasons Why, Riverdale or Grown-ish. If most extras on the show are thin — which happens to be the case a majority of the time for these shows — younger viewers may be led to believe that an overwhelming majority of students are straight-sized in real life, which is statistically false. Casting diverse body types both as lead characters and extras reflects the world we live in and the people we are and know.

The role doesn't have to have been written for a plus-size person for a larger actor to be cast. In fact, casting actors of diverse body types in roles that have nothing to do with weight pushes the needle of representation forward.

The Disney Channel has done this successfully, long before Shrill or Dumplin' came to screens. Who could forget Galleria (Raven-Symoné) in The Cheetah Girls or Martha Cox (KayCee Stroh) from High School Musical? Both are plus-size women whose storylines did not revolve around weight, and their successes and interests were not qualified by size. Galleria arguably held The Cheetah Girls together as songwriter and lead singer, and Martha was head cheerleader and a dancer for East High’s musicals.

Leah (played by Autumn Walker), a minor character in the recent Netflix romantic comedy The Perfect Date, is plus-size. Though she is only on screen for a brief period of time, her size is irrelevant to her story, and the other characters don't remark upon it at all. She gets a similar happy romantic ending to many other teens in the film, as well.

So while it's important to share stories about the experience of being fat, that experience is not singular or narrow.

The impact of body positive content can be cut down when fatphobic content is just adjacent to it. Netflix may have given us Dumplin’, but the service also renewed Insatiable for a second season after immense backlash from the plus-size community. To Bustle, fat activists claimed that Insatiable equates being fat to being "ugly" and "worthless" and that it "[perpetuates] the stereotype that your life doesn't actually begin until you lose weight."

Fatphobia is not like politics. There are not two sides to show and explore. Any content creator or network aiming to be body positive would only create stories that represent fat people in a truthful, sensitive way and do not belittle fat people, even in banter or asides.

No network is perfect. There's media that can reasonably be both praised and criticized. But with time — we can hope, at least — should come progress. And when attention is paid to body positivity and diversity — in aspects both large and small — change is possible.

More like this
At 28, Rosie Perez Risked Her Career To Stop Playing Stereotypes
By Gabrielle Bondi
Here’s Everything Coming To & Leaving Netflix In February
By Jake Viswanath
'Boiling Point's TV Sequel Is Set To Deliver A “Rollercoaster Of Emotions”
By Catharina Cheung and Sophie McEvoy
I Tried Kendall Jenner's No-Pants Look As A Plus-Size Woman
By Sarah Chiwaya
Get Even More From Bustle — Sign Up For The Newsletter
From hair trends to relationship advice, our daily newsletter has everything you need to sound like a person who’s on TikTok, even if you aren’t.