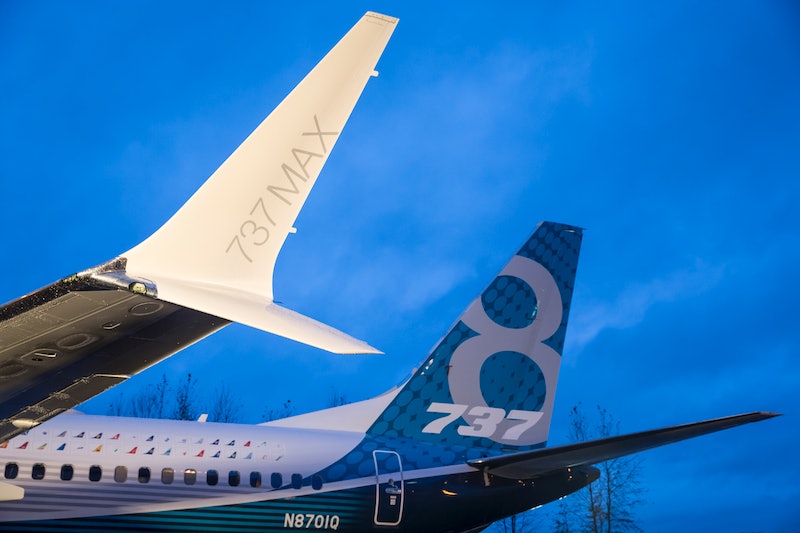 Plane crashes always bring about an outpouring of sympathy when they happen, but they don't always bring about an immediate change in the way air travel operates. A deadly crash on Sunday, however, appears to be one of the latter sort. Boeing 737-8 Maxes are being grounded in two countries and within several other airlines after one of the planes went down in Ethiopia in very similar circumstances to a previous crash in Indonesia.

Ethiopian Airlines announced on Twitter on Monday morning that it was grounding its fleet of Boeing 737-8 Max planes.

"Although we don't yet know the cause of the accident, we had to decide to ground the particular fleet as extra safety precaution," the airline wrote.

Authorities elsewhere followed Ethiopian Airlines' lead in taking the Boeing 737-8 Maxes out of the sky. The Chinese government took action on Monday morning, ordering all Chinese airlines to ground their 737-8 Maxes, according to The New York Times. Chinese airlines had been flying a combined total of 96 of those planes, and they were only given nine hours to switch over to different jets on the planned routes. The New York Times also wrote that Cayman Airlines decided to ground the two Boeing 737-8 Maxes that it had been flying.

Boeing declined to offer comment on news that its aircraft had been subject to grounding in multiple places, but a spokesman did email Bustle a statement about the Ethiopian crash, saying that the company was "deeply saddened to learn of the passing of the passengers and crew on Ethiopian Airlines Flight 302, a 737 MAX 8 airplane" and pledging technical assistance to those investigating the crash in Ethiopia.

The Ethiopian Airlines crash has provoked enough concern to cause entire fleets of brand new planes to be grounded, because it happened in a circumstance very similar to the Lion Air Flight 610 crash that happened in October 2018, as CNN wrote. Both flights had issues soon after takeoff, and the pilots asked to return to the airport before the planes crashed, according to Bloomberg. There were certainly differences between the two cases, perhaps most notably the fact that pilots had already reported mechanical issues with the Lion Air plane that went down, as Bloomberg wrote, whereas there had been no previous issues with the Ethiopian Airlines plane.

Two crashes in such similar circumstances with the same, new type of plane could lead to major problems for Boeing and this line of aircraft, as Bloomberg wrote. Earlier plane models that suffered public — and tragic — mechanical failures soon after they had been introduced struggled to regain consumer confidence. In addition to the groundings already discussed above, Bloomberg reported that Indian authorities were also considering taking the Boeing 737-8 Max aircraft out of circulation. While the American Federal Aviation Administration and the EU aviation regulator have decided not to take that step yet, Boeing's stock has already fallen by 10 percent after the crash, according to CNN.

"Two crashes of a brand new type in a short time is an unprecedented state of events," Greg Waldron, aviation research firm FlightGlobal Asia managing editor told CNN. "It is inevitable that this will affect perceptions about the 737 MAX family."