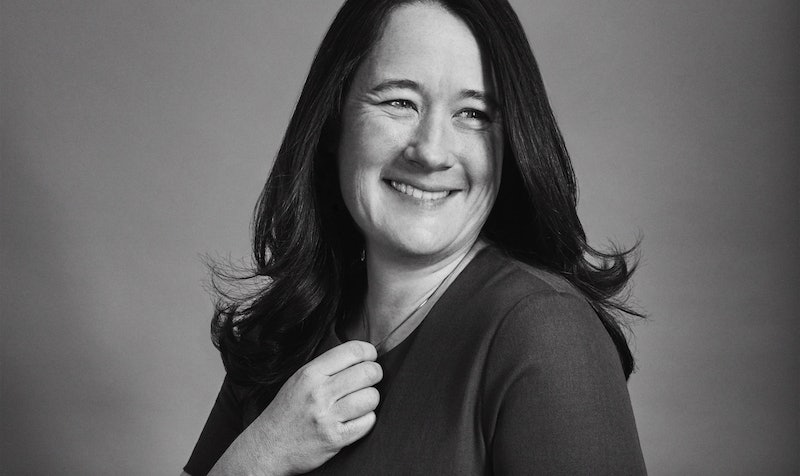 In Bustle's Quick Question, we ask women leaders all about advice — from the best guidance they've ever gotten, to what they're still figuring out. Here, Micky Onvural of Bonobos shares her journey in leading a purpose-driven brand, and the importance of bringing your authentic self to the workplace.

With a storied career that has run the gamut in everything from food to beauty to real estate, Micky Onvural, CEO of menswear brand Bonobos, could probably sell you anything. But Onvural doesn't just want to sell you things. She wants to sell you a feeling — specifically, the feeling that you belong.

"Our mission statement is we make fit happen for everybody," Onvural tells Bustle. "It's a mission around creating a world where we all fit."

It is in this quest for creating a purpose-driven brand based on promoting gender equality, inclusion, and diversity that Onvural has spearheaded new initiatives for the brand, including its #EvolveTheDefinition campaign combating toxic masculinity that launched a viral ad spot in July 2018 — one that, at the time, received a polarizing response as a brand taking a stand against toxic masculinity, with many viewers lauding the move, and others seeing it as an overstep for a clothing brand.

"There are those moments where you're like, 'Oh, did we do the right thing?' But to be honest, the conversation was the point. I think what we learned is, 'How do we fine tune this message to make sure it's as inclusive as possible?'” Onvural says. “It wasn't meant to say that a traditional version of masculinity is wrong. It was meant to say ‘Let's expand the definition of masculinity.’”

With these same values in mind, Onvural also spearheaded a recent partnership with Promundo, a nonprofit organization committed to gender equality and the prevention of violence, which led to a national study examining allyship and perceptions of gender equality. On the results of the study, which were released on March 5 just ahead of International Women's Day, Onvural says, "I think for me, the big 'a-ha' was that men want to help women and they want there to be more gender equality, not only in the workplace but at home, but often they don't know how to help... without saying the wrong thing."

This in turn led to a comprehensive guide that lives on Bonobos's site, called "8 Steps Men Can Take To Support Gender Equality," as well as a female-designed capsule collection for Bonobos that will donate 40 percent of its proceeds, up to $100,000, to Promundo. But according to Onvural, the results of this partnership and the brand's #EvolveTheDefinition initiative are only part of Bonobos's broader plans in continuing to champion gender equality.

"It's been a journey," Onvural says, "and it's just picked up steam."

Here, Onvural tells Bustle the worst advice she's ever received, how she pumps herself up for big meetings and presentations, and what's on her to-do list.

What is something that you need advice on?

MO: I'm a first-time CEO. So what I'm figuring out is what kind of CEO do I want to be, and what is the right CEO to be for an organization at our stage of growth. And so that is the advice that I look to others for. I'm actually part of a women's group called Chief, which recently formed here in New York. I'm part of an eight women's CEO group, and we meet once a month, and we ask each other advice about everything from "How do you balance work and home?" — many of them are moms like, I am — to "How do I handle this kind of challenge with an executive or with a board or with this very specific business topic?" So as I am discovering what it means to be a CEO and the breadth of that role, they're a really amazing sounding board.

How do you pump yourself up before a big meeting or presentation?

MO: So, I am naturally a pretty positive human, but the way that I do it often is to just — this is going to sound a little trite — but I will look in the mirror and just say, "You got it." Sometimes it's really just about self-affirmation. I don't know if you've ever watched that YouTube video of that little girl — you know the video I'm talking about? — it's channeling that.

MO: So I'm very lucky, I have three small children — they're seven, six, and three — so as soon as I walk in the door, there's an automatic forcing function, which is, "Come play Uno with me, come do this puzzle." And so for me, that's my wind-down time, is with them and putting them to bed and reading stories. So I have a sort of forcing function to turn off at the end of the day.

What is the worst advice you've ever received?

MO: This goes back a really long time, but I received some advice probably 20 years ago — the very beginning of my career — to be a little "less Micky." And what that meant was, "You need to change who you are when you're in the workplace." And the reason I think it is the worst piece of advice, is I have actually discovered — certainly in the last five, six years of my career — the importance of authenticity, the importance of playing to your strengths, and the importance of bringing your whole self to work.

What's your back up plan?

MO: Oh, well that's easy. I would be a chef. There are two reasons I'd be a chef: I love food. I love the process of creation and making food. And I love people. I love to entertain. So for me, one of my biggest joys is getting friends and family around the table with a really good meal. But to be able to probably do it, I'd need to have a restaurant that only has 20 people so that I could actually talk to everybody — so it may not be the best business idea, but that's what I would do if I could just totally indulge my passions.

MO: Am I allowed to repeat myself all the way back to the beginning, which is to be yourself? I mean, if you think about my point about the worst advice I got 20 years ago, I think my advice would be actually stay true to yourself and play to your strengths. That's one piece of advice. The other piece of advice I talk about often is be patiently impatient. So I think if you're ambitious and you're smart and you can see the future and you can see the long term, you're very impatient to get there. But sometimes actually it pays off to be a little bit patient, to sometimes take the sideways move, not necessarily the upwards move — to change industries to change disciplines, to change cultures — and by being patient and taking some of those sideways moves, it can actually help accelerate you later in your career.