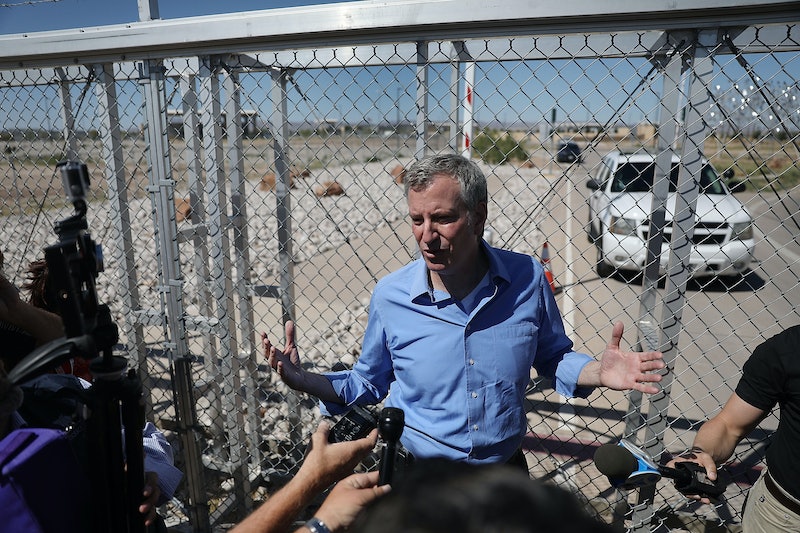 In his efforts to advocate for immigrant families, New York City Mayor Bill de Blasio went down to the U.S.-Mexico border last month to see a holding facility for immigrant children. However, U.S. Customs and Border Protection has since accused Bill de Blasio of illegally crossing the border during his visit to the region. De Blasio's office denied the allegation, suggesting that it was an attack on a mayor who has been critical of the Trump administration's immigration policies.

On June 21, de Blasio and approximately 20 other mayors from across the country journeyed down to a section of the Texas border near El Paso, according to the Associated Press. In a letter obtained by the AP, CBP alleged that de Blasio and his security detail — which is run by the New York Police Department — violated both American and Mexican immigration laws by subsequently crossing the border on foot during his visit.

The letter further alleged that a uniformed Border Patrol agent asked de Blasio's group if any border officials had authorized their presence near the holding facility. A NYPD inspector reportedly said no, and the letter alleged that the group had arrived from the Mexican side of the border to view the facility.

However, De Blasio spokesman Eric Phillips denied the allegations made in CBP's letter, saying that the mayor's group had approval to be at the border and did not, in fact, do anything illegal during their visit.

“The mayor crossed the border with the direct approval and under the supervision of the border patrol supervisor at this port of entry,” Phillips told the AP. “Any suggestion otherwise is a flat-out lie and an obvious attempt by someone to attack the Mayor because of his advocacy for families being ripped apart at the border by the Trump Administration.”

A spokesman for Border Protection, meanwhile, did not provide the AP with any comments about the incident.

The CBP's letter containing the allegations against de Blasio was sent on June 25, four days after he and the other mayors visited the border region. According to the AP, de Blasio was denied entry into the holding facility for immigrant children. He subsequently went to Mexico and crossed back into the U.S. to view the facility; he and his group reportedly stopped to take photos south of the Tornillo, Texas, Port of Entry.

De Blasio has been a vocal critic of the Trump administration's policies on immigration, especially the "zero-tolerance" policy that resulted in more than 2,000 families being separated at the border. This policy, which was spearheaded by Attorney General Jeff Sessions, entailed pressing criminal charges against all adult immigrants who crossed into the U.S. without the necessary documents. This policy resulted in numerous immigrant children being separated from their families because adult immigrants who faced criminal charges were subsequently sent to federal jails and could not keep their children with them.

Shortly after his visit to the border — and on the same day that roughly 30,000 people in New York City protested the zero-tolerance policy — de Blasio called for comprehensive immigration reform and the abolition of Immigration and Customs Enforcement. In numerous public appearances, de Blasio has called on the federal government to replace ICE with "something better, something different." It is still unclear whether Border Protection will push for de Blasio to face consequences for his alleged actions at the border.

Following a significant amount of backlash from de Blasio and other lawmakers — as well as immigration advocates all over the country — Trump signed an executive order last month to keep families together at the border, but this did not end his administration's zero-tolerance policy. However, a federal judge ordered the Trump administration two weeks ago to reunite immigrant families who had been separated, and Trump has since appeared to walk back his zero-tolerance policy. CNN reported that so far, only 54 children have been reunited with their families, with the administration scrambling to figure out how to reunite the rest.