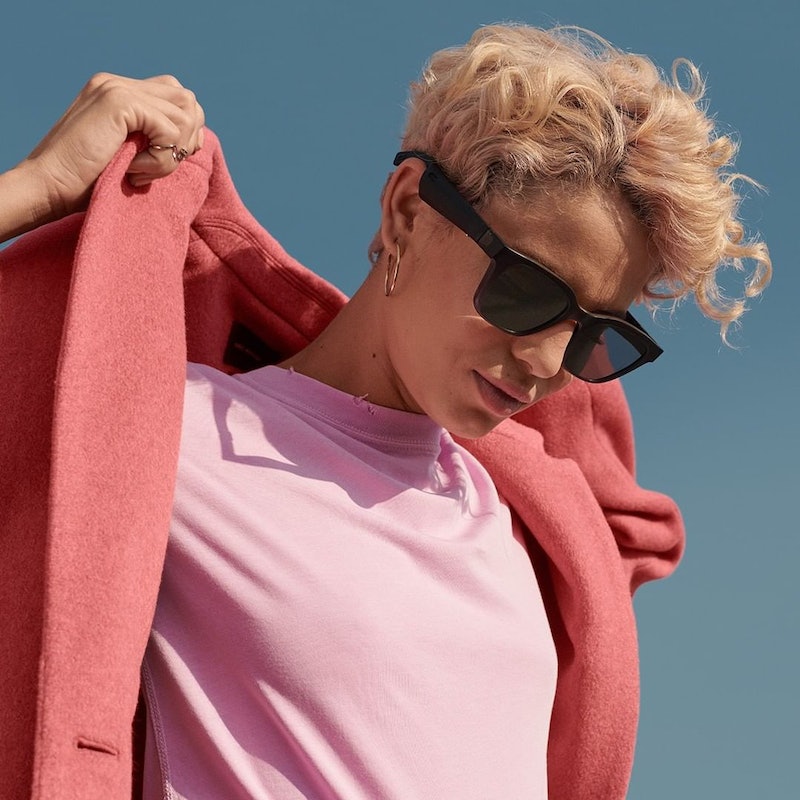 When we think of high-tech sunglasses, it's hard not to picture frames that can download data, give blind people the ability to see, or stream TV from anywhere you are, thanks to movies like Mission Impossible, Star Trek, and Back To The Future. And while we're not quite there yet with technology, we are pretty darn close, thanks to audio giants Bose. Earlier this month, Bose launched Frames, a pair of sunglasses that are equal parts sun protection and wearable. While they appear to be very stylish, normal-looking specs at first glance, they can do so much more. Frames has a built-in audio augmented reality platform, allowing users to stream music, make calls, and access virtual assistants, all while keeping the audio private to its user.

So, how does it work exactly? Bose says that they were able to create the tiniest, thinnest, and most lightweight Bose system ever and put it into each of the sunglasses' arm interior. There's also an ultra-small microphone and multi-function button that's embedded on the right temple, allowing you to pair the Frames with any Bluetooth device or pause and skip songs. I was able to try Frames ahead of the launch and was amazed at how loud I could play my music without disturbing the people next to me. They couldn't hear anything I could hear, and what I was hearing was crisp, clear audio.

Perhaps the most intriguing part about the futuristic specs however is its built-in audio-only AR, which stands for audio augmented reality. Bose Frames knows exactly where you are and what you're facing when you're wearing them using a 9-axis head motion sensor and your GPS on your phone. Instead of projecting an image in front of your eyes, like a visual augmented reality device would, Frames uses audio. For example, last March at SXSW, reporter Adi Robertson from The Verge explained that she used the device to take a tour of Austin's bars and restaurants. When Robertson looked at a building, she tapped the side of her sunglasses and heard a quick description about what she was looking at. The company is currently developing more apps like this for the Frames and will give users the ability to do more with the built-in AR. According to Bose, they will be launching the first apps in the next couple months.

If you're impressed by all of the technological offerings, but are at all concerned that the actual sunglasses are bulky and unattractive, they are anything but. Bose Frames comes in two classic styles — Alto, a square and angled frame, and Rondo, a round and slightly smaller frame. They come in one sleek (yet futuristic) color — matte black. Both Frames are scratch and shatter resistant and block up to 99 percent of UVA and UVB rays. And as far as the bulkiness part goes, they weigh approx. 45 grams, which is standard for sunglasses. When I wore them, they did not feel heavy at all, despite the fact that they have those built-in speakers, a microphone, and a battery that can last up to 12 hours.

Bose Frames are available for purchase now on Bose's website and retail for $199. While that's a rather steep price to pay for a pair of sunglasses, when you factor in the built-in bluetooth headphones and the microphone, it's actually pretty reasonable for a pair of frames that belong in James Bond's gadget case.