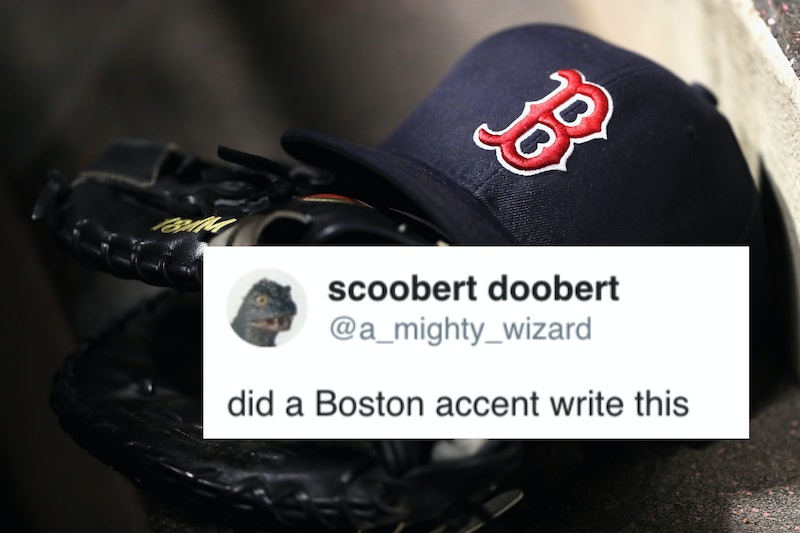 There’s a lot going on in the world right now. A lot of is terrible. A lot of it is soul-crushing. But then there are things like this, which are… kind of a thing all their own: A survey saying the Boston accent is the sexiest accent in America has recently been released, and everyone is having pretty much the exact same reactions to it.

I’m overgeneralizing a bit here, of course; there are plenty of other reactions to the survey results scattered across social media, covering both the “WTF” camp and the “Actually, yes, I do find the Boston accent attractive” camp. Personally — and I say this as someone who was born and raised in the Boston area — I fall into the “WTF” camp; if you happen to be in the “Actually, it’s hot” camp, though, then more power to you. We shall agree to disagree like the mature, responsible adults that we are.

But it is true that the same two reactions to the survey keep popping up on Twitter over and over again — and honestly, it’s kind of hilarious.

Here’s the deal: The survey was conducted by the travel site Big 7 Travel and ranks 50 American accents in order from least sexy to sexiest. Big 7 doesn’t say much about their methodology; all the post detailing the survey tells us is that the ranking hails from “sample survey results” of Big 7’s social media audience, which they say comprises some 1.5 million people. I’ve been unable to figure out whether that means they launched a poll into the ether via public posts on their social media accounts or whether they surveyed their followers via some other method — I came up empty when I searched for posts on their accounts calling out for follower responses, but I absolutely could have missed something somewhere — but it’s probably safe to assume that there was some kind of call-out somewhere in recent months that asked people to tell Big 7 which American accents they thought were the sexiest versus least sexy.

My apologies to anyone from Long Island; coming in at number 50, the Long Islander accent was deemed by this particular ranking to be the least sexy accent in the entirety of America. Filling out the bottom 10, we have, in order from 41 to 49 (with 41 being the least offensive of the batch and 49 being the worst of the worst): Pennsylvania Dutch, Cincinnati, Pittsburgh, Floridian, Southern Ohio, California Valley, Alaskan, Minnesotan, and New Jersey. Apparently, the survey respondents weren’t fond of Ohio or Pennsylvania. Just, y’know, in general.

The top 10 accents are just as inscrutable. The number one slot went to the Texan accent, which Big 7 described as “a Southern accent with a twist”; meanwhile, others ranked this highly include the New York accent, the Mainer accent, the Chicago accent, the Mississippi accent, the Hawaiian accent, the Philly accent, the St. Louis accent, and the more general California accent (as opposed to the Valley accent that appeared in the bottom 10).

But the biggest puzzle — the one that is truly baffling the internet right now — came from the silver medal winner of the bunch: The Boston accent was deemed the second sexiest accent in the United States, according to Big 7’s survey.

Yep. The “pahk the cah(r) in Hahvahd Yahd” accent. (Although, fun fact: Generally, you cannot park the car in Harvard Yard. Parking in that section of Harvard University in Cambridge, Mass. is only allowed on freshman move-in day, and then only for about 20 minutes per car, according to the Boston Globe.)

Twitter, as you might imagine, is having a field day with the fact that the Boston accent took the second top slot, largely because, although distinctive — and, I guess, sexy to some people—this particular accent is… not a pretty one. And, again, if you scroll through the Twitter reactions to the survey results, the same two reactions keep appearing, reappearing, and reappearing again.

This is the first:

In its simplest form, this particular response places either “any other accent” or “every other accent” in the number one slot, and the Boston accent in the second. And, I mean, that’s fair, as far as I’m concerned, although if you feel differently, that’s also A-OK.

However, there are also some variations floating around which are equally hilarious. There’s this one, for example, which zeroes in more specifically on American accents:

As well as this one, which gets right to the point:

And then there’s this one, which, I mean…

The second reaction has fewer variations, but honestly, it’s so iconic that it doesn’t really need them:

Typically, that’s the form you’ll see it in — no punctuation, and occasionally minus any sort of capitalization:

They’re all funny. Each and every one. Because we are all incredulous, and there is humor in experiencing incredulity with so many other people at the same time. Especially when it's over something as inane as what makes an accent “sexy” or not.

(This probably doesn't need saying, but just for the record, it matters not a whit what the survey results say; everyone has their own likes and dislikes, and what one person finds sexy might make another want to run away screaming into the night. All of these thoughts and feelings are valid.)

Oh, and hey, if you feel like wading into yet another accent-driven controversy, this isn't the first time Big 7 Travel has ranked 50 regional accents; they did the same thing to the UK recently, too.

Have fun, kids. Be civil. And react away.

More like this
8 Completely Unserious Tips To Make Your Cuffing Season A Success
By Ginny Hogan
Why TikTok Is Obsessed With Caesar Salads Right Now
By Alexis Morillo
Behind The Hilarity Of The "POV: You Walk Into My Room" TikTok Trend
By Lexi Inks
TikTok's Butter Board Might Be The New Cheese Plate
By Emma Carey
Get Even More From Bustle — Sign Up For The Newsletter