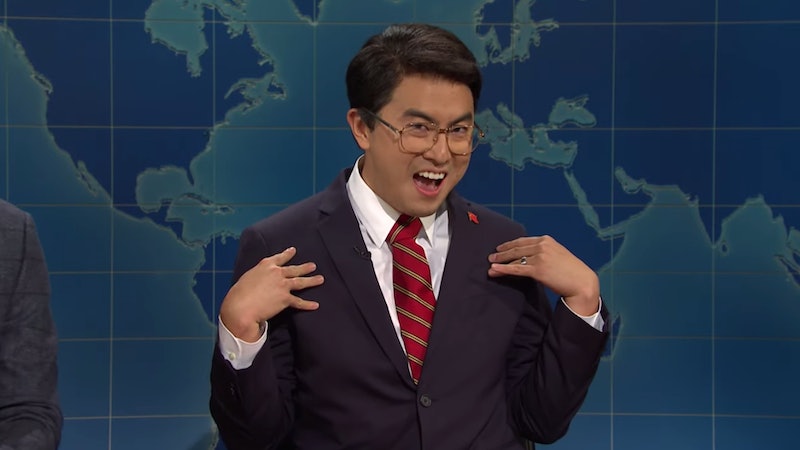 Writer, comedian, and “100% that trade daddy” (as coined in his recent "Weekend Update” segment as Chen Biao, a Chinese government tariff expert) Bowen Yang’s career before Saturday Night Live is just as impressive as he is. Yang, the first openly gay Chinese-American full-time cast member on SNL, joined the sketch comedy series for Season 45 on Sept. 12. Since then, the comedian has held his own with memorable standout sketches, such as a stint as 2020 presidential hopeful Andrew Yang and North Korean leader Kim Jong-un. Before his historical SNL turn, however, Yang boasted an impressive resume that ranged from his very own podcast to several TV guest roles.

For those who have been following Yang on the internet, the comedian is notorious for his lip dubs that took on pop culture icons that ranged from The Devil Wears Prada’s Miranda Priestly to Grey’s Anatomy’s Dr. Cristina Yang. Yang’s newest addition as a full-time cast member on SNL doesn’t mark his first stint on the popular sketch comedy. He served as a writer for the show for one season and has written sketches for episodes that featured Emma Stone, Sandra Oh, Awkwafina, and John Mulaney as host. Continue reading for a timeline of Yang’s pre-SNL career.

Prior to his full-time turn on the sketch comedy, Yang served as a writer for Season 44 of SNL, as per Entertainment Weekly. He’s credited as a writer for 21 episodes, according to his IMDb page. In addition to Stone, Oh, and Mulaney, notable episodes that Yang helped pen include the ones with hosts Steve Carell, Paul Rudd, Emma Thompson, and Jason Momoa. Last season, Yang also made his first SNL onscreen appearance as North Korean leader Kim Jong-un alongside Oh when she hosted on March 30 in the “Kremlin meeting” sketch. The SNL sketch wasn’t the first time Yang appeared alongside Oh on screen. At the 2019 Golden Globes on Jan. 6, Yang helped co-host Oh hand out Pepcid to the audience to combat the “Asian flush.”

Along with his new SNL job, Yang also serves as co-host of the weekly podcast Las Culturistas with comedian Matt Rogers. In the podcast, the dynamic “culture consultant” duo discuss all things pop culture, and have had featured guests that range from Joel Kim Booster to Ilana Glazer since its 2016 launch. Yang and Rogers recently appeared in a Sept. 6 Today show segment, where they condensed five months of pop culture news into 90 seconds.

On social media, the comedian and pop culture connoisseur filmed lip dubs that often reached viral status. In the clips, such as the Miranda Priestly one highlighted above, Yang would lip dub moments from film, TV, and more in perfect and hilarious sync.

Throughout his career, Yang has also appeared in TV shows and films. He starred in the 2019 Rebel Wilson comedic film Isn’t It Romantic, and has had TV guest roles in the Comedy Central sitcom Broad City, the HBO web comedy High Maintenance, the Vimeo web series The Outs, and the Comedy Central sketch series Up Next, in which he portrayed fashion designer Alexander Wang. Yang will next star in Awkwafina's sitcom Awkwafina Is Nora from Queens, set to premiere on Comedy Central in January 2020.

In true comedian form, Yang has also dabbled in a series of stand-up comedy routines. Most notably, Yang appeared in Season 2 of Jessica Williams and Phoebe Robinson’s podcast 2 Dope Queens in February. In a set recorded for 2 Dope Queen’s HBO special, Yang joked about being a BTS reject (a reference to the famous South Korean boy band) and his Chinese-American ancestry.