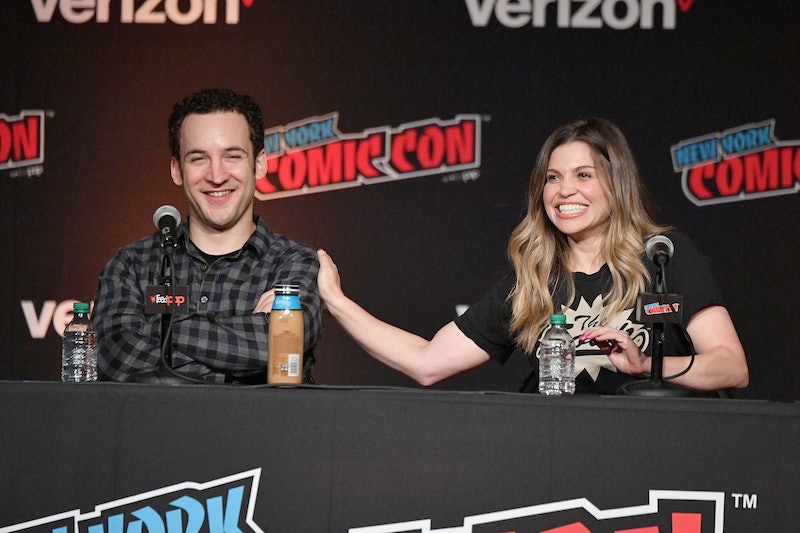 Get ready to feel all warm and fuzzy inside thanks to a photo of Boy Meets World's Ben Savage with his co-star Danielle Fishel's baby. Of course, Fishel couldn't help but share this sweet moment with her Instagram followers, who might be feeling all the '90s feels after seeing this snapshot. Not to mention, might be feeling a little old after realizing Topanga is now a mom.

"The original Boy came to meet our boy," Fishel Karp wrote on Instagram. The caption, a nod to their former TV show's title, was Savage welcoming Fishel's first child, Adler Lawrence Karp to the world.

However, from this photo, it's clear that Fishel wasn't quite ready for everyone else in the world to meet her newborn son just yet. As Fishel explained on Insta, she and her husband Jensen Karp "have chosen to keep Adler's face off our social media pages." That's why she chose to cover Adler's tiny face with a robot emoji.

But, all you need to see is the proud smile on Savage's face to know that holding Fishel's little one was a big moment for these two who have known one another for just over 25 years. They were just little kids back in 1993 when Boy Meets World premiered and now in 2019, Fishel became a new mom. And through it all, Savage and Fishel have stayed friends. Savage was also present at her wedding last year. Seriously, how could that not put a big smile on someone's face?

Fishel gave birth to her son on June 24, a month earlier than expected. It was a complicated birth, as Fishel later revealed on Instagram alongside photos from the NICU where Adler was staying while doctors worked to get fluid out of his lungs. It was that fluid, Fishel explained, that led to the early birth.

"One week ago today, on 6/24 at 4:52am, Adler Lawrence Karp made his entrance into the world, 4 weeks early," she wrote on Instagram on July 1. "My water broke on 6/20, one day before my work week directing at Raven's Home ended and my maternity leave began. I was hospitalized that night and put on magnesium sulfate because Adler was only 35 weeks old."

At three weeks, Fishel and her husband were able to take Adler home. No surprise, she celebrated this big moment with an Instagram post thanking those who helped him get healthy. "We never wanted to know this hospital and its staff so well," Fishel wrote of the staff at Children's Hospital L.A, "but now that we do, we can say with certainty there is no better place for children with medical needs."

In the time Adler's been home, he's had a few visitors. Before Savage came by, Fishel's Girl Meets World co-star Sabrina Carpenter also stopped by to meet her new baby boy.

"My bb's met my baby," Fishel captioned a shot of Carpenter with Adler, who in this photo had a angel baby emoji covering his little face. Clearly, Fishel's Boy Meets World and Girl Meets World families are excited to meet this little guy. Let's hope Mr. Feeny stops by soon to say hi, too.