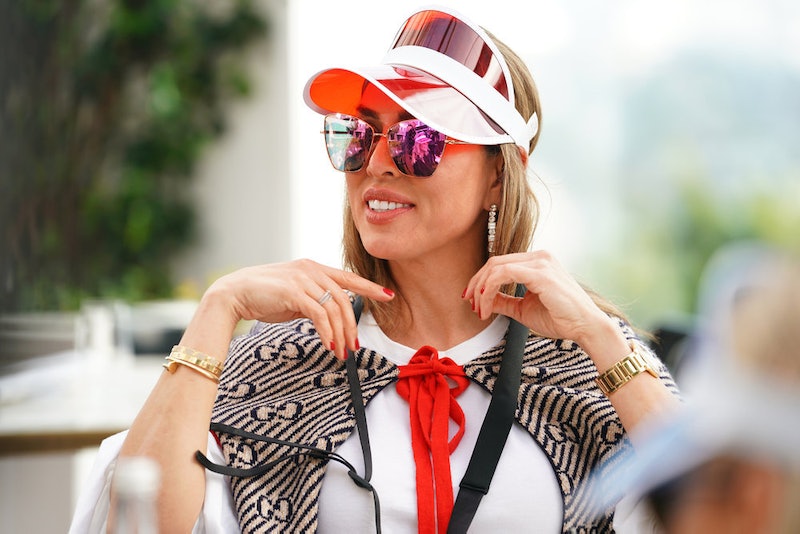 Allegiances on Real Housewives Of Orange County change all the time, but it's surprising to think that Kelly and Braunwyn aren't friends on the show. Braunwyn is a brand-new Housewife, and she only got into the Housewives kingdom because Kelly knew her from the Balboa Bay Club . Well, don't believe everything you might read — or see on Instagram — because Kelly and Braunwyn from RHOC are definitely still friends after filming. According to Kelly, they just hit a few bumps in the road in upcoming episodes.

Braunwyn and Kelly have the same energy, so it's not surprising they became fast friends. Also, Braunwyn and Vicki Gunvalson, the former OG of the OC and Kelly's sworn enemy, don't get along from what we've seen on Real Housewives Of Orange County so far, which means she's definitely chosen a side. Braunwyn always reports back to Kelly when the women are speaking bad about her, so it seems like Kelly and Braunwyn are tight.

But they have had their trials. According to Instagram account Comments By Bravo, which screenshots Housewives' comments for shade and posterity, Kelly claimed in the summer of 2019 that Braunwyn was simply a "pawn" to the other women.

Maybe Kelly didn't mean it maliciously and was just frustrated about watching her friend be pushed and pulled around. At the very least, Kelly and Braunwyn have seemingly moved on from the moment, because Braunwyn is still a staple on Kelly's Instagram account. Kelly snaps pictures of her and her friend to promote upcoming episodes of Real Housewives Of Orange County and just simply when they hang out with each other.

Every Housewives friendship has its moments under the stress of being on camera and with group dynamics (Emily and Gina are having their own issues this season, for example), but Kelly and Braunwyn still seem tight. If there was a problem, there doesn't seem to be one anymore.

For her part, Braunwyn seems to have done her best to assimilate with the other women. Sure, there was that moment where she lied about reaching out to past Housewives to get the dirt on what it's like being on the show, and Braunwyn was called out for it. But besides that, she's doing her best to show her loyalty to her friends and family.

Braunwyn told Bravo that most of the women opened up to her very quickly — yes, even Shannon Beador, who has a tendency to push away new Housewives. "The minute I met Shannon... I feel we just got along instantly," Braunwyn said. "It’s always sort of the joke that she’s not nice to the new girl, and she was. She’s just so nice and inviting and welcoming." Of course, said Braunwyn, Vicki "ignored" her for most of the season, which also sounds about right.

Given the fact that Braunwyn and Kelly are good on social media and not flaming each other in the public eye, it's safe to assume that their friendship is back on track. Which is good, because there are so many tables they haven't danced on together yet.