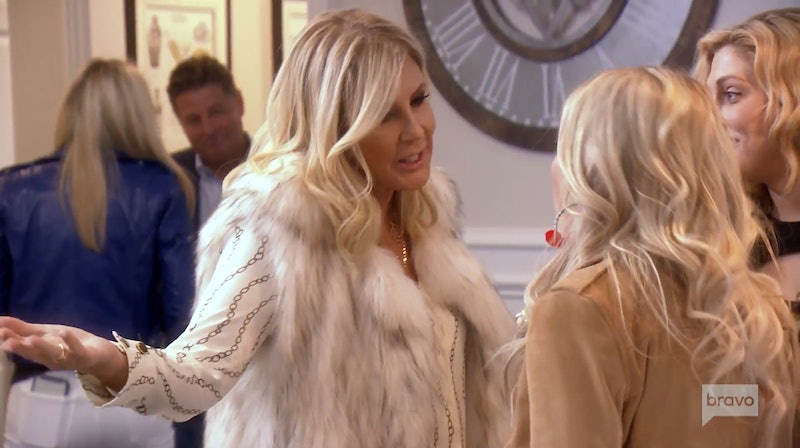 Real Housewives of Orange County viewers know that Vicki Gunvalson is rarely welcoming when it comes to new cast members. Considering that Braunwyn Windham-Burke became a full-time cast member the season that Vicki got demoted, there's no chance Vicki likes her, right? It's a bit unclear if Braunwyn and Vicki are friends in 2019, but they definitely got off to a rough start.

During the second episode, Vicki completely ignored Braunwyn and acted as if she didn't exist at Tamra Judge's housewarming party. To make matters worse, she made a bee-line for Braunwyn's husband Sean instead, touching his arm and asking him where he got the necklace he had on. Braunwyn discussed her first impressions of the RHOC cast in an August 2019 interview with People. She began, "Some of these women I connected with right away. Some of them took a little bit longer to warm up to."

Then she got specific. Braunwyn shared, "I think that Vicki and I probably had the slowest start. I joke about the fact that I don't even think she knew I existed until maybe like a week ago. Her first impression, she walks right past me and was flirting with my husband." Not the best first impression, not by a longshot.

And Vicki's initial thoughts on Braunwyn were not flattering in return. During an on-camera interview from the Aug. 20 episode, Vicki said, "This is weird. This is supposed to be about Tamra's house warming party. I don't know who ‘Browned Wind' is, Kelly [Dodd] I could give a rat's ass that she stormed out, and Gina [Kirschenheiter], I think I settled that with her."

Did Vicki purposely mispronounce Braunwyn's name? Or was she just not paying attention? Either option is a bad look for the OG of the OC.

During an interview with Real Housewives superfan Jerry O'Connell on his new talk show The Jerry O Show, Vicki recalled meeting Braunywyn at Tamra's party. Vicki said, "She said she didn’t have a good feeling about me and I’m like, ‘I don’t even know who you are.'" If only Vicki gave Braunwyn a chance to introduce herself instead of passing right by her.

Vicki actually did speak to Braunwyn before leaving Tamra's party and confronted Braunwyn about forming a bad opinion about her, while doing nothing at all to influence the formation of a positive opinion. Vicki told Braunwyn, "We'll talk because your perception of me is wrong." While laughing, Braunwyn asked, "Are you sure?" Vicki was not-at-all friendly and added, "I know who I am. Don't listen to outsiders. Listen to me. OK?"

Considering that Vicki's nemesis Kelly introduced Braunwyn to the group and Braunwyn met Gina before Tamra's party, those two are probably the "outsiders" that Vicki was referring to since both of them had issues with Vicki at the time. When Braunwyn told Vicki that she listens to her "gut," that answer did not sit well with the OG cast member either. Vicki responded, "Whatever. I don't really care. You can be nasty and nice," which makes very little sense.

Still, Vicki commanded, "You have two choices. Right now, you're not being nice." Was Vicki talking about herself or Braunwyn there?Unfortunately, these two did not get off to a great start, but how did things end up? Apparently, fans are going to have to see how the season progresses to get a clear answer on that one, but historically speaking, Vicki is not warm to new cast members. Plus, she had to be pretty upset about the demotion after thirteen seasons of holding an orange.

And what about Tamra's remark about having a new "tres amigas," referring to a trio comprised of Tamra, Shannon, and Braunwyn instead of Vicki? That just had to sting.

Maybe Vicki's amigas helped persuade Vicki to accept Braunwyn. Or maybe these two will be on opposite couches at the Season 14 reunion taping. If Vicki even gets a seating assignment at the reunion, that is.