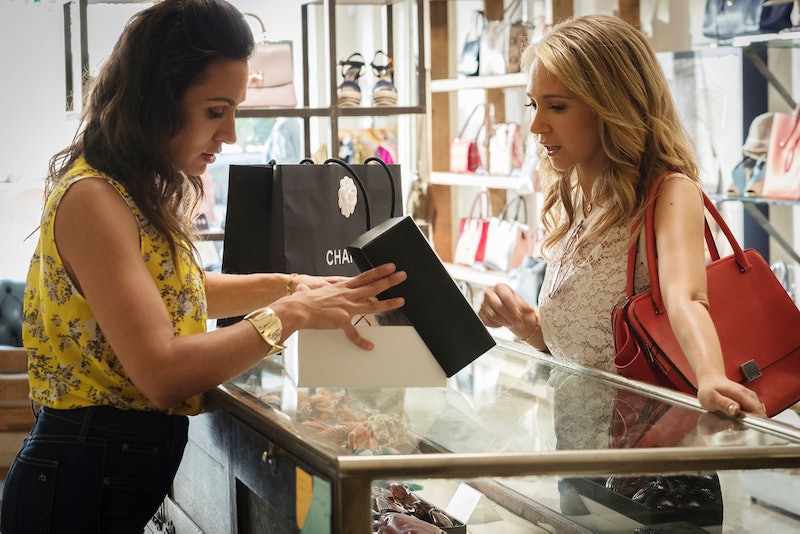 In the first episode of Bravo's new series Dirty John, Debra Newell is swept off her feet. John Meehan seems like everything she ever wanted in a husband: He's handsome, charming, a caring doctor, and, most importantly, he seems head over heels in love with her. But her family quickly suspects that John isn't all that he seems to be, and by the second episode, they begin to take matters into their own hands. And it's an interesting point that's not made quite as clear in the podcast: Debra Newell's family's had so many resources to protect her from Meehan, and while their wealth and privilege definitely helped them get ahead of him, in a way, it by no means protected the family all from trauma and eventual violence.

One of the most striking lessons from Dirty John is that abusive relationships don't have to be physical — experts call it "coercive control" in Debra's case — and they can happen to anyone, despite their race, gender, and especially social class. But certain privileges do mean that there are sometimes more options for victims to get out and/or report their partners for behavior much like Meehan exhibited.

To be clear, Debra's wealth in absolutely no way granted her immunity from falling into an emotionally abusive relationship, both on the scripted series and in the real-life events that inspired the show. In this case, it actually seemed to make her a target. As Veronica senses from the moment she meets him in the series, John seems to be wooing Debra to benefit from the financial success wrought from her interior design company. She rents the apartment they share together, lets him drive her fancy cars, and even allows John to transfer her emergency stash of cash (nearly $80,000) into a safety deposit box. All while John continues to simultaneously seduce Debra and systematically isolate her from her family.

But the Newell's wealth certainly helped Debra's daughters get one step ahead of Meehan. Veronica, convinced that John is not who he says he is, begins to take investigative matters into her own hands. First, she buys a real-time, GPS tracking to device to place on the car that John regularly drives. While they aren't exorbitantly expensive, these types of tracking devices are selling at full retail price from around $80 to $100: Not everyone can afford to shell out that type of cash for an investigative measure that might not actually amount to anything.

Then there's the private investigator Veronica hires. She makes it clear up front that her services aren't going to be cheap — she's charging a $2,000 fee up front, plus $150 an hour, all not including additional fees incurred during the investigation. Ronny ends up selling one of her mint-condition Chanel bags in order to pay for the investigation, but it's a sacrifice that quickly achieves results. Debra's family finds out that not only is John is nothing that he claims to be. This is pretty major.

Even though the family's wealth by no means protects them from John's malicious intentions, it does give them the ability to arm themselves with information about him. Imagine if Veronica hadn't had the means to hire a private investigator, or to even put a tracker on the car. It might have been months longer before the family discovered the real truth about Debra's fifth husband, months in which John's behavior could escalate, and Debra could become farther removed from those who really love her.

In the end, though, how much money or privilege one has doesn't protect anyone from abuse, whether it be physical, emotional, sexual, or stalking. It doesn't discriminate, though gender, race, and social class can play a role in how seriously someone is taken when they report abuse or whether they report at all, as evidenced by Department of Justice statistics.

The National Domestic Violence Hotline notes that some women stay with their abusive partners because they are financially dependent on each other. That's definitely not Debra, but the Hotline also states that there are many other reasons one might stay in an abusive relationship, from not recognizing the behavior as abuse, to the fact that the person may actually still love their partner. In both the podcast and the series, Debra initially doesn't want to totally cut ties from her new husband, even after learning that John has a long history of stalking, abusing, and manipulating women.

In Debra's case, it does seem that love for John has blinded her to the ways in which his behavior is abusive and manipulative. And money certainly can't protect her from his worst impulses. But the Newell family is armed with information, information they'd have a hard time getting without their privilege. And that's not insignificant either.