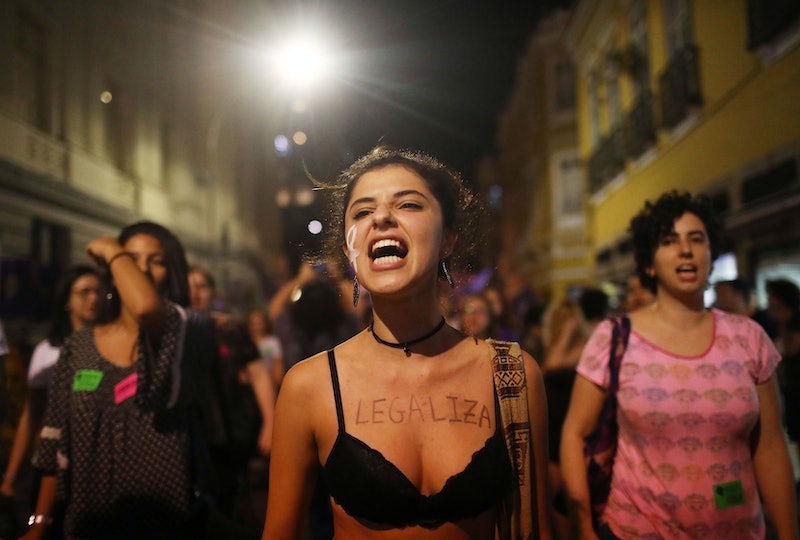 Brazil elected Jair Bolsonaro as president on Sunday, marking a momentous shift to the far-right. His extremist policies and outrageous comments about minority groups have had some people refer to him as the Brazilian version of Donald Trump. And of his many troubling stances, Bolsonaro's decidedly anti-abortion views may impact Brazil's push to expand abortion rights.

"I repeat: As far as I am concerned, proposals to liberate abortion in Brazil will have my veto and Brazilian money will not fund NGOs that promote this practice," Bolsonaro wrote in a tweet on Oct. 12. He's reportedly made similar statements throughout his campaign.

Bolsonaro's position would only make Brazil's abortion policy more extreme for its citizens. In Brazil, abortion is already banned, except for cases involving rape or fetal abnormality or a danger to the woman's life, according to Time. This means that elective abortion — that is, abortion simply because someone wants an abortion — is outlawed. However, Bolsonaro's position is complicated by the Brazilian Supreme Court, which is currently considering the constitutionality of allowing elective abortion up to 12 weeks.

One study found that 1 in 5 Brazilian women under 40 has had an abortion, the Associated Press reported. Michelle Oberman, a law professor at Santa Clara University and author of the book Her Body, Our Laws: On the Front Lines of the Abortion War, From El Salvador to Oklahoma, wrote in the New York Times that about half of these abortion are induced via drugs like misoprostol. The World Health Organization has called misoprostol one of the "essential medicines" related to miscarriage treatments. "Efforts to restrict access to misoprostol will fail not simply because it costs pennies to make, but also because it saves lives," Oberman wrote.

In an interview with the Guardian, one activist pointed out how women would be especially targeted by a Bolsonaro presidency. "We cannot allow someone with such highly anti-democratic positions on women’s rights to reach the highest job in Brazil," Ludimila Teixeira, the founder of Mulheres Unidas Contra Bolsonaro or Women United Against Bolsonaro, told the Guardian.

She also warned that women will hardly be the only people to suffer. "We are his main target but we are not the only ones," Teixeira said. "Many other communities are having their rights threatened."

But Bolsonaro did win. In fact, his presidency was celebrated by anti-abortion websites, including one called LifeSite News, which noted that Bolsonaro's victory was "putting an end to a generation of leftist rule."

In 2017, a Brazilian congressional committee approved a bill to ban abortion entirely, but it hasn't reached either chamber for a full floor vote, according to the Associated Press. Under Bolsonaro's presidency, however, that may change.