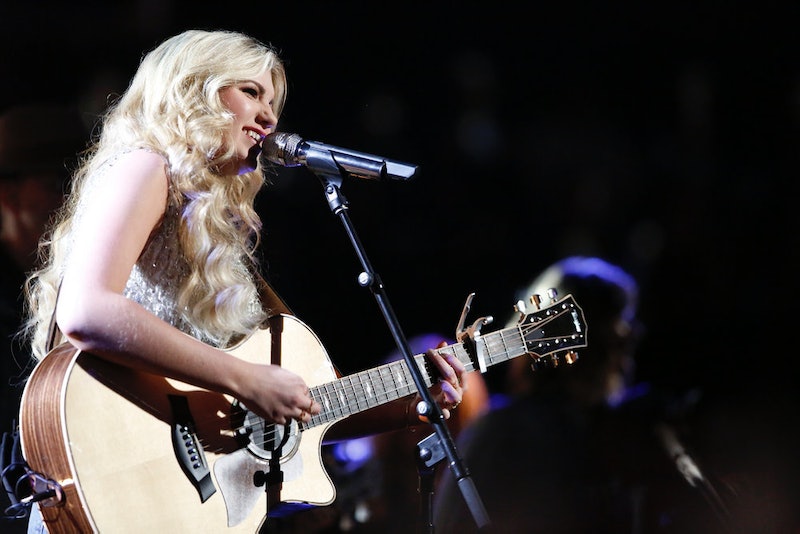 I'm not one to go making wild bets, but let me tell you something: I'd like to make a bet that one of The Voice's youngest contestants on Season 12 is headed straight to the finals. For the semifinals round, Brennley Brown gave an energetic Voice performance, showing audiences a completely different side to her singing capabilities that absolutely worked to her advantage. If anything, Brown proved again (as she does damn near every week) that she deserves to be one of the final artists in contention to win it all this season. Furthermore, she really just solidified that she is one of the most exciting voices emerging in the country music scene right now.

It was a spectacularly vibrant and youthful moment for Brown on the Voice stage on Monday night as she sang her heart out. Choosing for her solo song the pop-infused country song "Suds In The Bucket" by Sara Evans, Brown emerged from her somewhat mature chrysalis she'd build over the course of this season. On Monday night, she revealed that, yes, she actually is a young woman with a youthful edge to her talents. The song was the perfect way for Brown to change it up on the audience and the judges. The song let Brown be exuberant, cheeky, and even show off some guitar-playing skills. Basically, she killed it. Did you really expect any less though?

Brown was, of course, a little nervous about switching things up with her style so late in the season. After weeks of singing emotionally and musically mature, complex songs on The Voice, "Suds In The Bucket" was a big lane-change for her. It was easy to see during her pre-taped rehearsal footage that she was a bit nervous about how it would go over, despite coach Gwen Stefani's reassurances that this is exactly what she needed to do to show that she was a multi-faceted singer.

As expected, Brown's performance wowed. Playing the guitar, really leaning into those lyrics and giving them a bit of playful grit and growl, Brown came alive onstage. After that performance, it's not tough to imagine that she'll head to next week's finals.