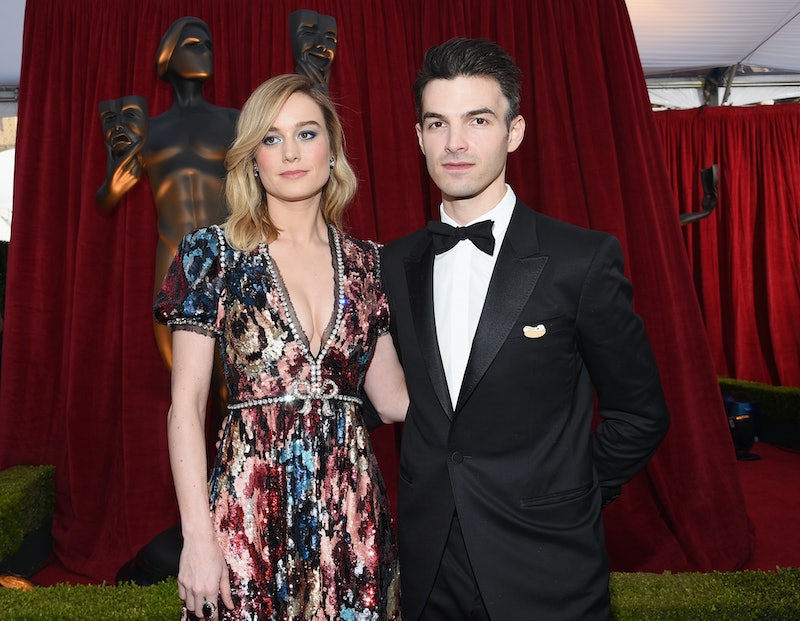 It seems another Hollywood couple is calling it quits. Brie Larson and Alex Greenwald have reportedly ended their engagement, according to People. The Ms. Marvel actor has been dating Greenwald since 2013, and they officially got engaged in May 2016. The notoriously private couple have yet to confirm the reports that they've called off their engagement. Bustle reached out to Larson's representatives about the reported split, but did not hear back by the time of publication.

Despite keeping their romance out of the spotlight, Larson and former Phantom Planet singer Greenwald often stepped out on the red carpet together. In 2016, Larson thanked the musician in her Golden Globes and Screen Actor's Guild award speeches. As reported by Entertainment Tonight, the actor also talked about her then boyfriend backstage at the SAG awards. "He's the other half of the equation — how can you explain support?" she told ET. "I mean, it goes beyond anything. He's just my person, he's my best friend."

It does seem that the reported split is amicable, and a source told People that the pair remain close. While neither of them shared an abundance of couple photos on social media, it seems that the last time Larson did share a picture of Greenwald on Instagram was Nov. 23. At the time she posted a Polaroid of them cuddling on a couch with the caption, "'Happiness quite unshared can scarcely be called happiness; it has no taste.' #CharlotteBrontë." Meanwhile, the musician would sometimes post photos credited to Larson, like this July shot of him wearing a Captain Marvel hat.

Larson, whose career took off in a major way after starring in the 2015 film Room, has a busy year ahead of her. Captain Marvel is set to premiere on March 8, and the actor will also appear in Avengers: Endgame this summer. Additionally, she has the civil rights film Just Mercy starring Michael B. Jordan coming up in 2020. It's sad to know that Greenwald is unlikely to be by her side during her big Marvel debut, but the actor will no doubt be surrounded by supportive friends and family as she starts her next chapter.

Just as they kept their relationship quiet, fans can expect Larson and Greenwald to keep their reported breakup private as well. For the Room actor, preserving her privacy and keeping the attention on her art has long been a priority. In a Jan. 2016 interview with The Hollywood Reporter, she shared why she keeps certain parts of her life — including her relationship with Greenwald — out of the press as much as possible.

"Each step of the way I'm learning," she told THR. "When I leave an interview I learn whether I feel, oh, that was nice, or that made me feel like a little piece of me was taken. It's a line that is always on the edge of being crossed, and once you cross it, what's next?"

More like this
'The Bachelor's Peter Weber & Kelley Flanagan Are Reportedly Back Together
By Grace Wehniainen
Who Is Nick Cannon Dating & How Many Kids Does He Have?
By Jordyn Tilchen and Radhika Menon
Hailey Bieber Just Responded To *That* Viral Met Gala Moment
By Radhika Menon and Sam Ramsden
Khloé Kardashian Is Reportedly Dating A Private Equity Investor She Met Through Kim
By Jordyn Tilchen and Jake Viswanath
Get Even More From Bustle — Sign Up For The Newsletter